Dog DNA have been used by pet shops since the1980s, but have gained mainstream popularity in recent days. Dog DNA tests allow you to get your dog tested for genetic problems and diseases at no cost if you have his or her sample. There remains some debate over the accuracy of Dog DNA tests. Regardless, they are widely available for any dog owners. In this guide we discuss the average cost of a dog dna test.

The average cost of a dog DNA test is $94. DNA tests cost $60 on the low end while the most expensive tests can cost as much as $200. The DNA testing can be done at home by purchasing from a store or it can be done by a veterinarian. Many DNA tests come with either an optional or an included health screening that will raise the cost. 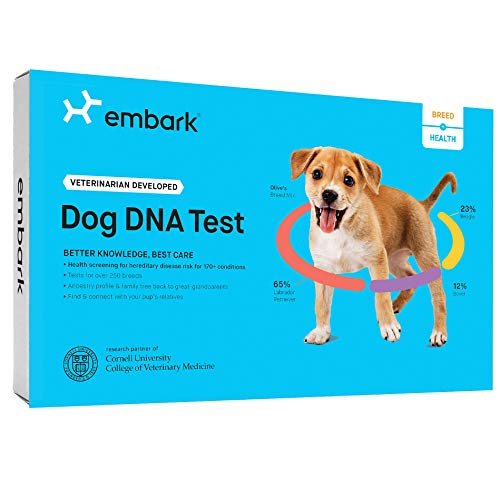 What is the Most Reliable Dog DNA Test

There are three main brands of dog DNA tests to buy; Wisdom, Embark Dog DNA Test, and My Dog DNA . Overall, Embark is the most accurate of all of the readily available DNA tests. Embark can test for over 250 breeds and for over 171 mutations. Embark has an easy to use online portal for reviewing the results of the test.

The second most reliable test is Wisdom. Wisdom tests for 350 different breeds, so it may be more suitable for finding rare dog breeds. However, it does not test for as many data points as Embark and so is less accurate. The cheapest and thus least reliable DNA test is DNA My Dog.

These tests usually cost between $60-$80. My Dog only tests for 100 dog breeds and for the least amount of data points, which makes it the least reliable test.

To find out the cost of game consoles, computers, and other items and experiences, check out our other articles!

For the most part, dog DNA tests are somewhat accurate. While there is always a slight room for variation due to human and lab technical errors, dog DNA tests are accurate about 93%-99% of the time. The most accurate test is Embark, followed by Wisdom and then My Dog DNA. It is important to get a good test from a dog in order to get the best results. The dog’s cheek should be swabbed for 20-60 seconds.

While the industry claims their products are highly accurate, veterinarians have cautioned against trusting everything that is suggested from the DNA and health screenings. Since the industry is not highly regulated, there are not strict standards on the testing. This could lead to slightly different results depending on the test used. Overall, the health suggestions should be taken with a grain of salt.

What does a Dog DNA and Health Test Find?

Dog DNA tests find the genetic breed of your dog. This could help dog owners learn about certain traits or disorders that their dog might be more prone to. The medical health test is used to determine if a dog has a medical condition such as cancer, arthritis, or eye problems. They also work to determine the cause of certain health problems and determine the appropriate treatment.

A dog’s complete genetic profile is the foundation for many breed standards. Breeders can quickly determine whether a dog is a healthy candidate for breeding or not. If a certain gene is found in one dog but not another, the breeder may have reason to consider an alternative genetic trait in a dog.