Average Cost to Go to Ireland

The lush green landscapes of Ireland are one of the most popular destinations in the world. If you are one of the millions of people planning to visit Ireland this year, you should plan out  a budget to ensure your vacation is both fun and affordable. To help budget your trip, we dug around and to determine what the average cost of a trip to Ireland will cost a typical solo traveler or family.

The Cost Guys estimate that the average 5 day trip to Ireland will likely cost around $1,600 including airfare, accommodations, transportation, attractions and food. The total cost of your trip will vary obviously depending on the length of your stay and your itinerary. We break down the cost of each aspect of a potential journey to Ireland.

Cost to Fly to Ireland

Prices to fly to Dublin, Ireland range from $500 to $1,100 depending on the season and where you are traveling from. Leaving from large cities like NYC, Chicago and Los Angeles are generally cheaper because airlines offer non-stop flights from those cities. If you live in smaller cities or cities where airlines don’t have direct flights, like Dallas, then your ticket is going to be more expensive.

Summer is the most expensive time to travel to Ireland where we found tickets can be 30% more expensive on average. Fall (and winter) will be the cheapest time of the year for you to go. Ireland can be a bit miserable in the winter however whereas the fall offers lush autumnal landscapes. 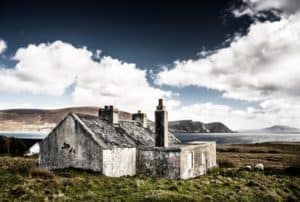 The best airlines to fly to Ireland include the country’s flagship carrier Aer Lingus. Aer Lingus usually offers the best price on most days. Other American carriers that routinely serve Dublin on a daily basis at  good price are Delta and United. KLM and American Airlines also offer flights although they are usually a little more expensive.

Cost to Stay in Ireland

The cost to on a per night basis for an Airbnb, hotel and hostel are about standard compared to the rest of Europe. If you want a private room in Dublin or Cork you should expect to pay about $100 per night. If you want a dorm room in a hostel, you can find a bed for about $30 per night. Cork is slightly cheaper than Dublin when it comes to finding a place to stay.

If you are going around Ireland  places in the countryside tend to be cheaper. For example in Inagh near the Cliffs of Moher, Airbnbs are about $5o to $55 on average, nearly $30 cheaper than in Dublin.

How Much Does It Cost To Get Around Ireland?

There are several ways of getting around Ireland. In the major cities there is intra city public transport like busses. Within Dublin there is also Uber for those who want to get somewhere faster. To get between cities in Ireland, the best options are busses, trains or renting a car.

Price of Renting Cars in Ireland: $30 per day for automatic transmission

Renting a car in Ireland will give you the most flexibility and freedom to move around the island. Ireland is small and most major cities are less than a 3 hour drive away. However, the Irish drive on the left-side of the road (opposite to the US) and Irish roads tend to be narrow and winding. If that does not deter you, rental cars cost about $30 per day (for an automatic). Most Irish cars are manual transmission, so you will need to specifically request an automatic which tend to be more expensive. If you feel comfortable behind a stick, then you will be able to find a car for about $15 per day.

Busses between cities are also a common way of getting around Ireland, and probably the best way if you are only visiting major cities. There are two bus companies to look at: Bus Eireann and CityLink. The former is a little cheaper (about $7 per ticket cheaper) but takes longer as its bus routes have many more local stops. CityLink, which is about $16 euros each way from Dublin to Galaway, runs express. You will get between each city in 2 and a half hours roughly.

Attractions in Ireland are not nearly as expensive as they are in England. There are also a lot of natural attractions which don’t cost money to enter. However there are attractions that aren’t free and if you go to many, the cost can add up. If you’re in Dublin for more than 3 days then you’re going to get a lot of value by using the Dublin Pass. A Dublin pass costs about $100 for 3 days – if you see 10 attractions you’ll save about $50. You can see the normal cost of several popular Dublin attractions below.

Cost of Food in Ireland

Food in Dublin is not cheap. Ireland is an island so importing food comes at a cost thats passed on to you. According to Numbeo, Compared to New York, a meal at an inexpensive restaurant is about 35% more expensive than in NYC (which is already expensive for just about anyone). You can see how prices for several food items compare in Dublin vs New York and a mid-sized city like Pittsburgh. Overall, you should prepare to spend quite a bit on food if you visit Ireland.