A P0171 code or “system too lean” repair code means that your vehicle’s fuel injection system is having problems.

Here, “too lean” means that the air/fuel mixture injected into your combustion chamber has too much air in. “Bank 1” means that the problem is in engine bank 1, which is usually the bank of cylinders located towards the front of your car, although this depends on your engine type. 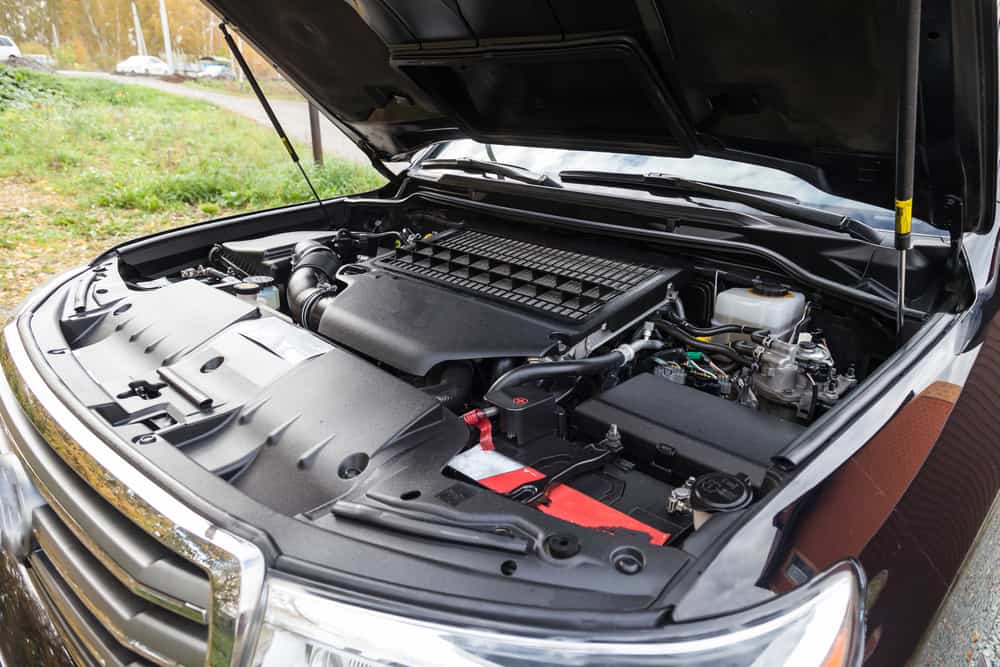 However, it also means that the cause of the issue can vary, and this will impact the cost of repair.

In fact, the cost to repair the system too lean bank 1 error can range between $80 and over $1,000. In fact, the issue can come from a clogged filter or from an exhaust leak or even fuel injector failure. This means you’ll have to diagnose the cause of the error code before you can get a good quote.

How Much Does The System Too Lean Bank 1 Repair Cost?*

A “system too lean” error can result from a number of different problems with the fuel intake or the exhaust. The cause will impact the total cost, because parts will vary in cost and some will be easy to replace while others will not be.

*Please note: These cost estimates are based on market rates from the time of writing in December 2022. Prices are subject to change.

The mass airflow sensor is a part that determines how much air should go into the engine. When the sensor gets dirty, it can misread how much air is moving into the fuel injection. It can also push too much air into the system, resulting in a P0171 code. In most cases, you can replace this part for $300 or less.

However, in most cases, you can resolve the issue by simply cleaning the sensor. You might be able to do that in less than an hour.

In addition, if you have to replace it, you’ll need to have your onboard software reset, which can cost $50-$150 at your dealer.

Most mechanics will check the mass airflow sensor first if you’re having issues with fuel injection. That’s because this is one of the most common issues. And, because it normally takes less than an hour of work to replace, it can be a very quick fix.

Vacuum leaks are considered the second most common cause of the system to lean error. However, fixing them can vary significantly in cost. For example, vacuum leaks can occur in the manifold, exhaust, or even the vacuum assisted brake line. That will mean inspecting a larger portion of your vehicle than a more straightforward leak.

However, vacuum leaks change the air pressure in your fuel injection system. It can lead to the onboard sensors reducing the amount of fuel in the mix, resulting in a “system too lean” error.

As one of the most common issues behind a lean system error, vacuum leaks should be one of the first things you check.

Fuel injectors are the next most common cause of a lean bank error. Here, your issue is most likely clogged, gummed, or worn fuel injectors. If the injectors aren’t able to inject enough fuel, you’ll have too much air in the mix.

Here, you can sometimes get away with simply taking the fuel injectors out and cleaning them. In many cases, you won’t even have to remove them from the engine. However, if your fuel injectors are old, replacing them may be necessary.

In addition, because hardware costs for fuel injectors are usually significantly lower than the cost of labor, replacing fuel injectors won’t always greatly add to the total cost.

As part of the fuel injection system, the fuel pump can cause your fuel-air mixture to be too lean. If the fuel pump is failing, it will reduce fuel pressure, meaning your engine won’t be getting enough fuel. Here, replacement costs can be significant, with most averaging between $250-$500.

In addition, some vehicles have the fuel pump installed inside the fuel tank. This can increased the cost of labor to make the repair.

A clogged fuel filter can cause the same issues as a fuel pump. However, it usually costs about $70-$150 to fix. Here, the best way to prevent filter issues is to regularly change your filter. But, if it’s been a while and you’re having problems with a lean fuel mix, it’s a good idea to check the filter.

If your fuel filter is located inside the tank, you can expect repair costs to be somewhat higher. However, you shouldn’t normally spend more than about a maximum of $200 to replace the filter unless you have a luxury vehicle.

The fuel pressure regulator controls the pressure of fuel entering the fuel injection system. It relies on pushing fuel through multiple vacuum-pressurized chambers to achieve the right pressure for the engine.

When the sensor, vacuum pressure, or the hardware starts to fail, you’ll start having issues with the fuel-air mixture. Here, the regulator will have to lose pressure in order to cause problems. This might be because of the vacuum system rather than the regulator. However, it’s always a good idea to check the regulator.

Depending on your vehicle, a new fuel pressure regulator will cost $140-$500.

In addition, it won’t always be necessary to replace the fuel pressure regulator itself. Instead, you may be able to simply adjust it to increase the pressure. However, if you have an automatically adjusting regulator, it may not be possible.

The EGR sensor and valve regulate the flow of exhaust from the combustion chamber back into the fuel injection system. This double-use of exhaust ensures that harmful NOx gasses are burnt off. However, if the sensor goes bad, it can result in a bad air-fuel mixture.

Here, costs will vary depending on whether you have to replace the valve, the sensor, or both. In some cases, you can also get away with just cleaning the sensor.

The PCV valve allows your engine to vent gases as they build up in the crankcase, maintaining proper air pressure. If the valve is stuck open or closed, vacuum pressure will change, meaning that you could have too much or too little air in the fuel mixture. In this case, the issue could be either the valve or the sensor.

Here, the price of the parts normally depends on the age of the vehicle. For example, if you have a brand new Audi Q7 and you take it to the dealer, you’ll probably pay about $600. On the other hand, if aftermarket parts are available, you could have the work done for under $150.

If your onboard software is misreading data, you’ll get errors. In some cases, the “system too lean” error can be a powertrain control module issue. Normally that will cost you around $1,000 although prices can range from as low as $500 to as much as $2,000+ depending on your vehicle.

Here, it can be difficult to replace a powertrain control module without going to the dealer. In many cases, you’ll have to input dealer codes to get them to work. This means you’ll likely have to pay the maximum amount for the repair.

In most cases, the largest factor influencing repair costs will be the part that’s causing the error code. However, there are several other factors that can impact what you pay to clear a P0171 error code.

The cost of your repair will heavily depend on what the cause of the error code is. Here, parts can cost anywhere from about $6 to over $1,000. Labor can also take anywhere from a few minutes to over 8 hours depending on the issue. This means that you can’t predict costs until after you run a diagnostic and see what the issue is.

Age of the Vehicle

The older your vehicle, the less likely it is to have an onboard diagnostic. If you don’t have one, figuring out what’s going wrong with your vehicle could require significant trial and error as you test and check every part that could potentially cause the issue.

With a newer vehicle, you can normally see the issue immediately. However, even that may not be very specific. For example, you may get a readout showing a fuel system error, which will narrow the issue down. However, you’ll still have to check the pump, the filter, and the pressure regulator.

Some vehicles may pinpoint the exact issue. This will save you time on assessing and fixing the issue.

On the other hand, if the diagnosis is wrong, you could spend time replacing or checking parts only to find it doesn’t solve the issue. That can add considerable time and cost to the repair.

In most cases, you can expect to pay about $94 per hour for your mechanic. However, rates vary between $15 and $210 depending on the shop and your location. Here, most dealerships will charge around $145 per hour. On the other hand, normal shops often charge around $50.

You’ll also have to consider that if your job takes less than an hour, the shop will probably round the cost up to an hour of work. In addition, you’ll probably have to pay a shop fee of 5-20%.

There are numerous reasons you could be getting a Lean Bank 1 error. In any case where your first bank of cylinders is receiving too much air in the mix, you’ll get this notification.

Dirty or damaged sensors can cause your fuel injectors to uptake more air, to take in less fuel, or to show readings that are inaccurate. Here, the mass airflow sensor, fuel pressure sensor, and EPG sensor are the primary culprits. The mass airflow sensor is the most common issue, because it easily accumulates dirt.

If your fuel injectors are dirty, clogged, improperly timed, or seizing, they will cause fuel error codes. Here, the issue may be to replace the lines, the fuel injectors, or to check the engine timing. However, it’s very common that simply cleaning the fuel injectors will resolve the issue. That’s especially true if you’re only seeing an error code for the first bank on the engine because if it were a software issue or an issue from the rest of the engine, it’s more likely to affect all of the banks.

The fuel pressure regulator and fuel lines can malfunction, reducing fuel pressure to the point where too little fuel enters the injection system. When this happens, you’ll normally have to adjust or replace the regulator.

In some cases, onboard software and sensors can malfunction and show false readings or can cause mistakes. Here, you’ll either have to reset the software or replace the control module. In this case, you’ll most likely have to go to the dealer.

If your exhaust or emissions system is having issues, it could reduce the flow of air from the exhaust back into the combustion chamber. That will change the air-fuel mixture. However, in this case, it’s more likely to create a “System too Rich” error, which means there’s too much fuel in the mix.

If your car is giving you a “System too lean: Bank 1” error, it means your fuel injection system is using too much air in the first bank of cylinders in your engine. Unfortunately, fixing that issue means diagnosing what’s causing the issue, as there are multiple problems that can cause the same error. Once you do, you can expect the cost-to-fix to range between $80 and $1,000+.