While fuel injectors can last the entire lifetime of a car, sometimes that’s simply not the case.

If you or a previous owner has failed to keep up with maintenance, something has gone wrong or clogged the fuel system, or the ABS sensor becomes faulty, you might have to replace your fuel injector(s).

Unfortunately, if one goes out, you’ll likely have to replace them all. 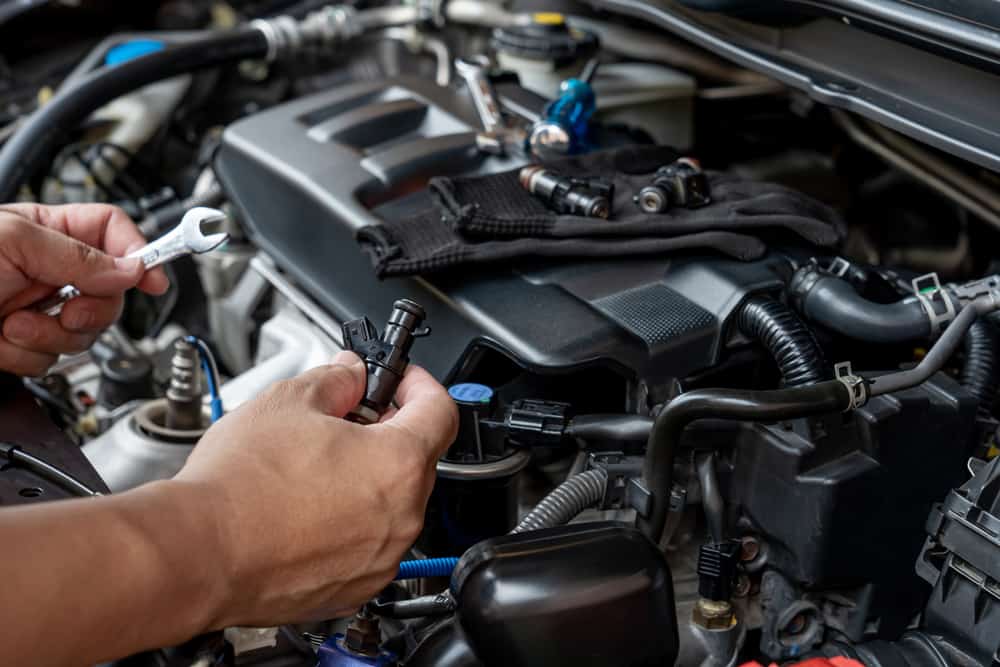 Luckily, replacing fuel injectors is unlikely to happen often. Once you go about replacing or even repairing your fuel injectors, they can last for several hundred thousand miles.

And, if you keep up with maintenance, they might never have issues. On the other hand, if you drive in adverse conditions, you might have to replace fuel injectors as often as every 50,000-100,000 miles.

However, the average cost to replace fuel injectors depends on your location and the make and model of your vehicle. Here, you can expect to pay anywhere from around $350 for a DIY job and a 3-cylinder vehicle to well over $3,000 for a mechanic to install high-end injectors on an 8+ cylinder vehicle. On average, you can expect to pay $60-$350 per fuel injector plus labor $150-$300 for installation.

That means replacing all 4 fuel injectors on a Honda Civic will likely cost $850 and $1100.

How Much Does Fuel Injector Replacement Cost?*

The cost of replacing the fuel injectors in your car will vary significantly depending on the make and model. That holds true for both the cost of parts and the cost of labor.

For example, some vehicles feature quick-replace systems, so you or a mechanic can swap out fuel injectors in as little as a few minutes.

Others require that the mechanic remove a significant number of parts from the engine to access the fuel injectors.

Therefore, you should always check for specific estimates for your make and model of vehicle.

Below, we’ve put together the average cost to replace fuel injectors for 10 popular vehicle models.

You can never precisely predict the cost of your fuel injectors without knowing what influences those costs.

In most cases, the cost of replacing your fuel injectors depends on the make and model of vehicle, the age of the vehicle, the labor required, who’s doing the work, and any additional problems that might occur.

The make and model of your vehicle is the most significant factor in the cost of replacing fuel injectors.

For example, if you buy OEM parts for a Toyota RAV4 versus a Toyota Tacoma, you’ll see a more than quadruple difference in the cost of parts. Here, factors include:

In most cases, you can buy generic or non-OEM parts to save considerably on the cost of parts.

Most mechanics charge an hourly rate for repairs. However, others might charge a fixed rate for a job.

For example, you can expect to pay anywhere from $47-$215 per hour for a good mechanic. On the other hand, you can often pay a flat rate of $160-$250 for labor to replace injectors.

And, of course, many mechanics have a minimum cost per job to cover time spent talking to you, working out the problem, ordering parts, etc.

Finally, many garages charge a garage fee. Here, you pay a daily fee for time your vehicle spends on the shop floor.

If you pick your vehicle up the same day, you may not pay this fee. If you leave it overnight, you almost certainly will.

On the other hand, if you decide to do the work yourself, you won’t pay anything for it but your time.

If your fuel injectors are having problems, you might have other problems as well. For example, the fuel pump might be clogged or dirty. The same could also apply to the fuel lines.

If you haven’t been regularly flushing or cleaning your injectors, it could result in problems in other parts of the vehicle. The same holds true in reverse.

What Does the Job Involve?

Replacing your fuel injectors will depend on the make, model, and year of your vehicle.

In the simplest cases, replacing your fuel injectors shouldn’t take more than 20 minutes. In most cars, the process is designed to be as simple as possible.

What Parts are Needed to Replace a Fuel Injector?

In most cases, you can replace fuel injectors at home with a simple set of tools.

How to Replace Your Fuel Injectors Yourself

If you don’t have an electrical system in place, replacing your fuel injectors is relatively easy.

To start, you’ll always want to start with a cold engine. You should unplug the battery negative post for safety while working on the engine.

Essentially, it’s actually very easy to change the fuel injectors in most vehicles.

Clogged fuel injectors are one of the most common problems of reduced, inconsistent, or poor engine performance.

Here are 3 signs your fuel injectors might be dirty.

If your fuel injectors are clogged, you can often simply clean them. You can do this yourself.

On the other hand, most mechanics have a standard and flat-rate package to do this for you as part of regular maintenance. For example, flushing.

Unfortunately, it is difficult to tell the difference without taking the fuel injectors out and inspecting the holes.

If your engine is stalling, it might be a fuel injection issue.

In addition, if your engine sometimes doesn’t start but the starter and fuel pump are fine, injectors can be the culprit.

You’ll also want to look at fuel injectors if your vehicle is sometimes losing power or reducing in power while driving or hauling loads.

When performing optimally, fuel injectors spray and atomize fuel into the cylinders based on the cycle – providing the optimum power for the optimum amount of fuel.

If they don’t fire and spray fuel or spray the wrong amount of fuel, your engine performance will be hit or miss.

If you see fuel usage going up without any other changes, you might have a fuel injector problem.

Here, you might be able to get away with cleaning your fuel injectors.

Unlike inconsistent engine performance, this issue is also unlikely to be related to the fuel pump or lines.

However, it could also mean that you have a software fault. In this case, you’ll want the dealer to reset or resolve the issue for you.

If you suspect fuel injector failure and want to know if you should be replacing or cleaning your injectors, taking them out is a good first step.

Here, you can follow the instructions from above. Then, you can simply physically examine the holes in the tip of the fuel injector.

However, if you don’t have a check engine light or another indicator that the fuel injectors are causing problems, you might want to have the vehicle checked first.

Fuel injectors can last for the lifetime of a vehicle if properly cared for.

While this isn’t always the best approach, it does mean that investing in maintenance can greatly reduce your total costs of car ownership.

Here, you’re recommended to clean your fuel injectors every 45,000 miles or every 3 years. If you choose an over-the-counter fuel cleaner, that should be every 4,000 miles.

In addition, you can choose to have your fuel injectors cleaned professionally.

On the other hand, you can take them out and manually clean them using a cleaning product and a pipe cleaner.

If you still have questions about replacing your fuel injectors, these answers might help.

Is it OK to replace just one fuel injector?

No. If one fuel injector goes bad, it usually means there’s a reason they did.

Here, replacing just one of your fuel injectors can result in more problems.

In addition, it can mean that fuel injectors don’t fire at the same rate, meaning you get inconsistent engine performance.

What is the lifespan of a fuel injector?

If you want to optimize performance, it’s usually recommended that you replace them every 50,000 miles.

However, for most uses, you won’t have to replace your fuel injectors unless you have a problem with the vehicle.

Can you drive with a bad fuel injector?

You can drive with a bad fuel injector. However, it’s recommended to fix the problem as quickly as possible.

While a bad fuel injector is unlikely to cause immediate engine failure, it is likely to cause engine stalling, engine flooding, or even pre-ignition of the fuel.

All of these can cause problems long-term and may be an issue. In addition, if your fuel injector is leaking, you should never drive with it.

Fuel injector replacement costs can vary significantly from vehicle to vehicle. However, on average, you’ll pay about $200 per injector.

In most cases, your vehicle will have 4-8 of them, depending on how many cylinders your engine has.

Because you normally want to replace all of them at once, replacing your fuel injectors can be costly.

Hopefully, this guide gives you a good idea of what to expect and what a reasonable budget for your fuel injector replacement should be.