If you’ve failed an emissions test, your car is rough starting or rough idling, or you’re stalling, the EGR valve is a likely culprit.

This small but essential part is responsible for controlling how exhaust gas reenters the system, reducing the oxygen in the gas mixture, which then burns slower. 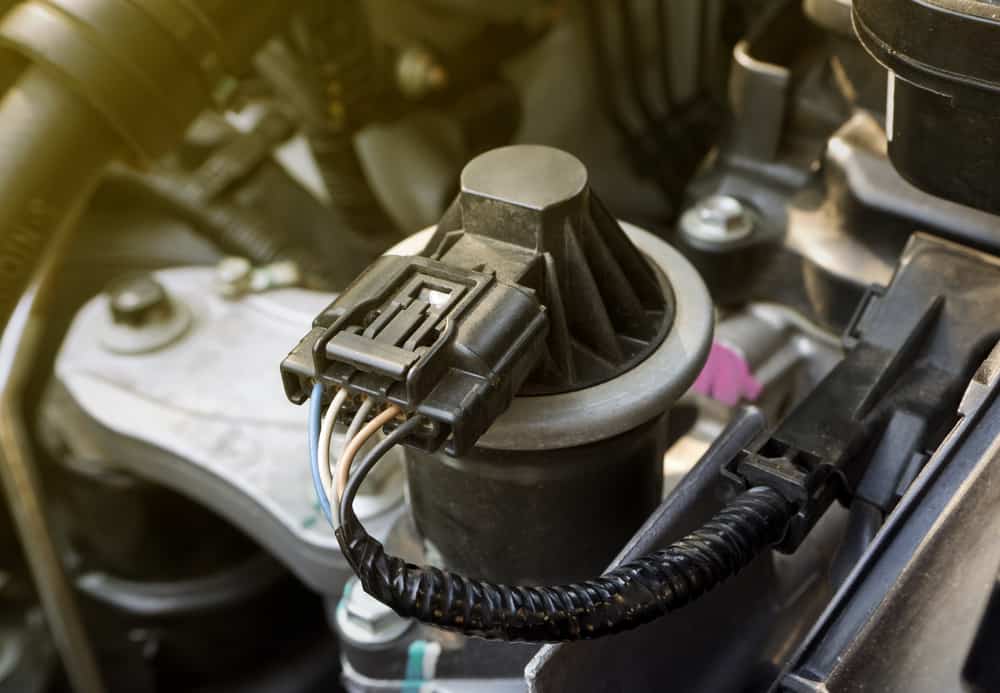 How Much Does EGR Valve Replacement Cost?*

The largest factor in the cost of an EGR valve replacement is the make and model of your vehicle. For example, some vehicles use very cheap and accessible parts while others use very heavy-duty and expensive parts.

For this reason, the cost of the valve alone can range between $60 and $500+ depending on your vehicle. The cost of labor and the difficulty of actually replacing the valve is also important.

In most cases, the largest price factor in replacing an EGR valve in your vehicle is the make and model of the vehicle.

The valve itself is a complex part, comprised of a solenoid, valve, and pressure mechanism. It can be extremely expensive just to buy the part.

However, the following factors will affect the total cost of your replacement.

Brand of the Part

Here, you can expect OEM valves to cost anywhere from $65 for brands like Ford to upwards of $500 for brands like Mercedes or Jeep. That significant difference in price range is why the make and model of your vehicle is so important.

However, you can almost always choose to look for aftermarket parts to reduce that cost. For example, if you buy a made-to-fit part, it’s been made to fit into your vehicle or a range of vehicles with similar needs.

Usually, these costs as much as 1/3rd less than an OEM part. You can also choose universal parts, although you’ll have to exercise caution here, as different vehicles use different gasket fittings and a different pin connection system.

Here, most vehicles have either a 2, 4, or 6 pin electrical connector and you’ll primarily want to ensure that your vehicle fits the new valve and connector.

On the other hand, if you have a vehicle that’s older than about 15 years, it’s highly likely to have a vacuum-operated valve instead. These are simpler and normally considerably cheaper.

Modern parts feature a computer-controlled solenoid, with an electrical connection (2-6 pin) and a solenoid. These can cost well over $150 each. In addition, your release valve will be more expensive if it’s connected directly to the intake manifold.

If your EGR valve is on a fuel line leading to the intake, it will normally be made of plastic and metal. These are cheaper and can sometimes be found for under $50 – especially secondhand.

However, if your valve is directly against the intake manifold, you’ll need composite metal for high heat resistance. That will cost more than a lighter plastic valve.

EGR valves connect to vacuum lines, fuel lines, electric lines, and possibly to the intake. Each of these parts can suffer from wear and tear as well.

In addition, you’ll want to ensure that you replace the gaskets around the valve (most valves do come with these, but especially if you’re buying secondhand, you should check to be sure). These can all add to the cost of the parts and the cost of labor.

Finally, the EGR valve is just one part of the EGR system. You might also have to replace the EGR cooler, the pipe, etc.

Most EGR valves are located in the engine bay, near the fuel intake. If you have an older vehicle with a carburetor instead of a fuel injection system, it will still likely be in the engine bay.

In some diesel engines, the EGR valve is located on the side of the engine. However, it should still be relatively accessible.

For this reason, you can normally expect to pay for about an hour of labor to replace the valve. In some cases, the work can be done in even less time.

However, there are exceptions. In very rare cases, you might have to take out a large number of parts to access the valve where it’s attached to the EGR pipe.

In a small engine, everything is fitted very tightly together and it can be difficult to access anything without taking parts out. Here, your EGR valve replacement might take 2-4 hours.

If you know what your local mechanic charges per hour, that makes calculating rates relatively easy.

5 Signs of a Faulty EGR Valve

If your EGR valve stops working the symptoms will depend on whether it’s stuck open, closed, or simply not performing well.

However, the most common symptoms will be a rough idle, reduced fuel economy, and gas or fuel smells.

If your EGR valve is stuck open, it allows exhaust gasses to flow into the manifold at an unimpeded rate. This changes the air and fuel mixture going into the engine, creating what is known as a lean mixture (high air, low fuel).

It also means that this mixture is not controlled, so your vehicle may have sudden gaps in fuel or large pockets of air. This causes the engine to idle roughly as it intermittently gets more or less fuel.

It might sound like your engine is going up and down, as though someone was occasionally pressing the gas pedal. If the problem is very bad and there’s a lot of air in the mix, your engine might even stall.

Unfortunately, this issue can stem from a lot of fuel injection problems, so you’ll have to test the full system and get a diagnostic to be sure it’s the EGR valve.

The EGR valve is intended to release engine exhaust back into the intake where it can be burned off in the engine.

If the valve is stuck open, it allows more air into the engine. This constant stream of air lowers the temperature of the engine, meaning that less of the emissions are burned off.

So, if you get an emissions test, you’ll have a higher hydrocarbon gas readout from the tailpipe. On the other hand, if the valve is stuck closed, you might have a high readout of nitrous oxide or NOx.

If your valve is stuck open, the temperature in the intake manifold will drop. That means fuel will ignite with less efficiency, which normally leads to an increase in the total amount of fuel you use.

While you likely won’t notice this symptom right away, you will definitely start using more fuel.

Unfortunately, this symptom can also track to almost any issue with the fuel injection system, meaning it can be quite difficult to diagnose without a diagnostic check.

If you’re smelling gas in or around your car and there’s not a fuel leak, there’s a large chance there’s something wrong with the EGR or purge valve. Here, you’ll likely want a diagnostic to check where the issue is coming from.

However, smelling gas or anything adjacent around the tailpipe or in the cabin is a sign to get your vehicle checked ASAP.

If the EGR valve is stuck closed, it won’t let enough air into the intake manifold. This will cause the engine to run hot – which can decrease engine performance, cause stalling, and increase fuel usage.

In some cases, you might also see other side effects like the engine actually overheating. Unfortunately, this symptom can also be the result of multiple issues, so you will need a diagnostic or an inspection of the EGR valve to verify.

How To Change an EGR Valve: 10 Steps

If your EGR valve has gone out, you can likely replace the part yourself. This can save you money –while allowing you to use cheaper and non-OEM parts your mechanic or dealer might not be comfortable using.

Of course, you should always make sure your parts are high quality and suitable for the engine. Otherwise, there’s not too much to replace a valve.

You’ll also want to start out with basic safety by parking your car on a flat and level space and taking the key out of the engine. Then, remove the battery cable from the negative post and tuck it up out of the way.

Importantly, these instructions are for an electric or solenoid EGR valve, not for a vacuum EGR valve. If you want to remove a vacuum-type EGR, check this video for reference.

For an electric solenoid EGR, watch this video:

Replacing your EGR valve is relatively easy, but chances are you still have questions.

How long does it take to replace an EGR valve?

Normally, you can replace an EGR valve in under an hour.

In some cases, replacing the valve can be as little as 20 minutes of work. In other cases, the job will take longer.

Can I drive with faulty EGR?

It’s illegal to drive with a faulty EGR valve.

In addition, your engine could overheat. You could also damage the fuel injection system.

How do you clean an EGR valve without removing it?

Normally you cannot clean an EGR valve without taking it off. That’s because carbon buildup usually has to be soaked out and scrubbed out.

Often, you’ll want to let the cleaner sit in the valve for several hours. You can’t do that while the valve is still in the engine.

Can a faulty EGR valve cause overheating?

Yes. If your valve is stuck closed, it’s not allowing enough air into the intake manifold.

Therefore, your engine can overheat.

If the EGR coolant system develops a leak, then yes, it can.

However, your EGR system can also cause a coolant issue by overheating the engine, which could cause steam to build up, resulting in a leak.

Replacing an EGR valve normally costs between $150 and $500, depending on your vehicle’s make and model, parts, and the cost of labor. However, you can also do the work yourself with no special tools.

In most cases, the full job will take around an hour. On the other hand, you’ll likely need a diagnostic to actually decide if your problem is an EGR one, so you might have to go to a mechanic anyway.