Geothermal energy is quickly becoming one of the most popular forms of sustainable energy.

In fact, in the U.S., geothermal plants generate some 16 billion kWh of energy each year.

That’s still a small fraction compared to solar and photovoltaic (which are at 115 and 112 billion kWh respectively) and about 0.18% of the U.S.’s total power consumption.

Still, geothermal plants are clean, truly sustainable, and extremely low maintenance. That makes them a good investment choice for anyone looking for long-term investments. And, with a build-cost averaging between $2,500 and $3,991 per kWh of production, geothermal competes with the cost of a new fossil fuel plant.

*Disclaimer: The research in this article was correct as of November 2022. Our sources are linked to throughout the article.

There are three primary technologies used to generate geothermal energy. These include dry steam, flash steam, and binary cycle.

However, as you can’t build dry steam geothermal plants anywhere but with the existing Geysers in California, those costs are hypothetical.

Dry steam is the most affordable form of geothermal energy, because it involves piping underground sources of steam directly to turbines.

However, with only two known sources of natural steam in the United States, installing this kind of geothermal plant is impossible.

That’s because the largest, Yellowstone National Park in Wyoming is protected.

The other, The Geysers, contains the largest geothermal complex in the world. In fact, The Geysers cover 45 square miles.

It hosts 18 geothermal power plants, which draw from 350 wells. And, with an annual net output of 6,516 GWh, it supplies almost 20% of California’s renewable energy.

Flash steam is the most common form of geothermal power plants.

These plants pump water into low-pressure areas in naturally occurring sources of hot water and steam. This steam is then used to power a turbine.

And, this form of geothermal energy is fully sustainable, as water is simply reinjected over and over again to maintain the reservoir.

Flash steam plants are the most cost-effective option you can build. Plus, if you build a larger scale plant, costs will average around $2,500 per installed kWh of capacity.

Smaller plants can cost much more, with rates going up to around $5,000 per kWh. That’s still significantly more expensive than a solar plant.

However, with a solar plant offering about 10-15 years of energy generation and the geothermal one offering ongoing energy, geothermal energy lasts longer.

Binary cycle geothermal plants are a newer technology. They improve the efficiency of the power plant by reducing the need to reinject water.

That improves sustainability, while reducing equipment needed. However, they are more expensive to install upfront.

Why? They involve using closed tubes of water (so the steam can’t escape) to heat liquid organic compounds. Those compounds have a lower boiling point than water.

So, the hot water reduces the liquid to steam, which powers a turbine. The water in the pipe is continuously recycled, ensuring a closed loop system.

The largest example of a binary cycle geothermal plant is the Beowawe Geothermal Facility in Nevada. It uses the refrigerant, tetrafluoroethene gas, to power its turbines. It was installed in 1985 and generates 17 MW of power.

The downside of binary cycle geothermal plants is that you will have to spend more upfront. In addition, with refrigerants, you’ll have more safety concerns and inspections to handle as part of the process.

However, it is likely to become the dominant geothermal technology, as it is more sustainable. In addition, because the injection can increase the risk of earthquakes, this is considered safer. 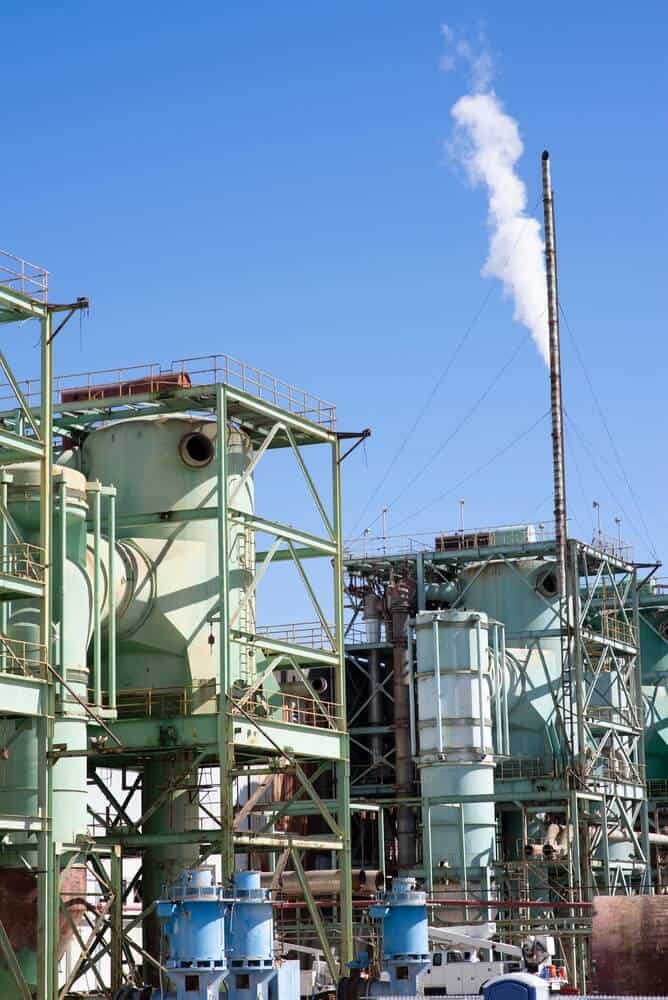 The cost of building a geothermal power plant can vary quite a bit depending on the area, the technology used, and the size of the plant.

Here, dozens of factors can impact total costs. However, the most important include research, land acquisition, the technology used, and the size of the power plant.

Often, that will mean taking a multi-step process to select a building site. For example, working with a team to identify potentially suitable build sites based on availability and heat maps.

From there, you’ll have to collaborate with property owners to drill and test temperatures below ground. This process alone can cost hundreds of thousands of dollars, because you’ll have to conduct multiple stages of research.

Only then can you move on to planning and permissions.

Location will impact a large number of factors in building a geothermal power plant.

For example, the cost of the land. If your sellers are aware they are selling a geothermal resource, they may ask more for the property.

However, more than 40% of total geothermal energy in the U.S. is from plants located on federal land.

Here, the Federal Bureau of Land Management leases land to organizations, allowing them to capitalize on existing resources.

This means that a large upfront land purchase may not be necessary. However, lease rates will be a large part of ongoing maintenance and ongoing costs.

ESMAP links the largest part of the cost of developing a geothermal power plant to the cost of initial drilling and construction. In fact, drilling accounts for almost 50% of total costs.

Injection wells extend anywhere from 0.6 miles to 2.8 miles into the ground – meaning drilling will cost hundreds of thousands per well.

Other costs like leveling and excavation can be significant as well. For example, land clearing costs around $200-$3,000 per acre in the western United States, where most geothermal plants are built.

For example, the San Emidio Power Plant in Nevada covers 22,944 acres, with 11.8MW of geothermal energy generation. In this case, much of the property is not developed, but gives the plant room to expand.

Building flash steam geothermal plants is cheaper than building binary cycle geothermal plants. However, regulation is increasingly leaning towards the latter, especially as the risk of earthquakes becomes better understood.

In several cases, flash steam projects have been canceled after public objection due to the risk of earthquakes.

This means that while you will likely spend more on a binary cycle geothermal plant, it’s a safer option to invest in.

Labor is one of the most significant factors in pricing a geothermal power plant. However, you can’t accurately do so without understanding what type of soil you’re drilling in.

For example, what kind of rock are you drilling in? Where is the water table?

That becomes extremely expensive when you consider that most geothermal plants operate multiple wells. The San Emidio operates over 38. The Geysers operates over 350.

So, leasing drilling equipment and paying labor costs for drilling can be extremely expensive.

Labor and construction costs will also come into play when building the facilities. Construction labor costs an average of $22 per hour across the United States.

If your geothermal plant takes 5 years to complete, you could be paying millions in labor costs alone.

The Bureau of Labor Statistics estimates that a single 50 MW geothermal power plant should employ 500-700 people for the duration of the build project.

At the current market rate of $3,000-$4,500 per ton of steel piping, materials will be a significant factor in cost.

Most importantly, material pricing changes based on location. Shipping costs will also be a large factor.

For example, if you have to ship thousands of tons of steel and concrete into a remote area, you can expect those costs to factor in the millions.

The smaller the plant, the more costs per kWh will be. For example, costs for a 1 mWh plant are estimated at around $5,000 per kWh.

This means that it directly pays off to build larger – because production costs reduce per kWh of installed power. At the same time, that does cap off at some point.

However, the larger your project, the less you will pay in total per kWh of energy produced.

Geothermal plants are famously low maintenance, with the U.S. Department of Energy citing annual maintenance costs as around $0.01-$0.03 per kWh of capacity. Those costs include operations.

In addition, in flash steam plants, those costs also include water injection to maintain the water reservoir.

Once you have the machinery in place, there’s very little that goes wrong. So, cleaning, repairs, and other maintenance will be ongoing.

In addition, you’ll have to employ staff for security.

In addition, you’ll normally have to spend money on inspections, compliance, and ongoing permits. These are not federally mandated, which means they may be included in your Federal land lease.

You may also pay different rates based on the state or area you’re in. And, many federal leases require that you pay royalties.

For example, the state of California earns some $7.85 million in royalties a year from leased geothermal land.

Geothermal power plants could be a good investment. However, they can be extremely costly.

There are many pros and cons involved.

Geothermal power plants can be extremely profitable over the long term. They provide a sustainable, low-impact energy source, with most plants estimated to have a lifespan of 60+ years before requiring major maintenance.

That drops the cost per kWh of installed power to about $0.03 in most of the United States. That’s half the cost of solar projects, which average $0.06 per kWh of total energy over the lifespan of the panels.

In addition, with low maintenance costs, geothermal plants can be good investments over time. And, when equipment does wear out, it’s unlikely you’ll have to re-drill wells.

Instead, you can repurpose them with new equipment – meaning the next build will be significantly cheaper.

Plus, geothermal plants are sustainable and renewable.

Geothermal plants can take up less than a tenth of the physical space needed for coal or wind facilities with the same energy production. And, with injection or binary cycle technology, they don’t deplete resources.

That makes geothermal plants a good investment for those concerned about sustainability, long-term costs, and long-term maintenance.

Geothermal power plants are massive projects. In fact, most take 5-10 years to build. They also include significant costs and risks upfront, with no promise of a return.

Initial drilling can require hundreds of thousands of dollars in investment, with no promise of success.

Most will have to invest in ongoing water and land management to ensure that wells don’t result in arsenic, mercury, or selenium toxicity in the land around the plant.

However, for many, the largest barrier is that geothermal plants require a massive upfront investment.

With most costing $5 million or more, building a plant is not an investment that will quickly pay off. In addition, geothermal plants can cost tens of millions of dollars, depending on how big you decide to go.

If you still have questions about building a geothermal power plant, this FAQ should help.

How long does it take to build a geothermal power plant?

However, actual construction can take anywhere from 2-12+ years depending on actual conditions, material availability, and labor availability.

How much energy does a geothermal power plant produce in a year?

Geothermal power plants produce energy based on the number of turbines or generators they can power. In most cases, that works out to about 0.64 acres of land needed per MW of electricity output.

However, your actual usage will depend on the region, its geothermal resources, and how you can utilize them. In addition, your cooling and geothermal technology will directly impact total costs.

What is the relative cost to produce geothermal power?

On startup, you can expect to pay an average of $3,999 per kWh of production capability for your geothermal plant.

However, over the lifespan of the geothermal power plant, actual costs per kWh of power hover are around $0.03. That’s significantly cheaper than many other options, while offering better sustainability than many alternatives.

Geothermal power is expected to become one of the predominant sources of energy in the U.S. by 2050. Currently, the Federal government is encouraging investors to move into the space. This could mean that geothermal offers a good long-term investment for those with significant access to capital and backers, and the time to wait for the plant to be constructed. However, in most cases, a geothermal plant will cost at least $5 million.