If you’re having engine issues like knocking, power problems, or even failure to start, it’s a good sign the crankshaft is having issues. When that happens, the bearings are the most likely culprit.

In fact, most vehicles recommend changing the rod bearings every 60-80,000 miles. This means you’ll normally have to do it at least once over the lifespan of the car. 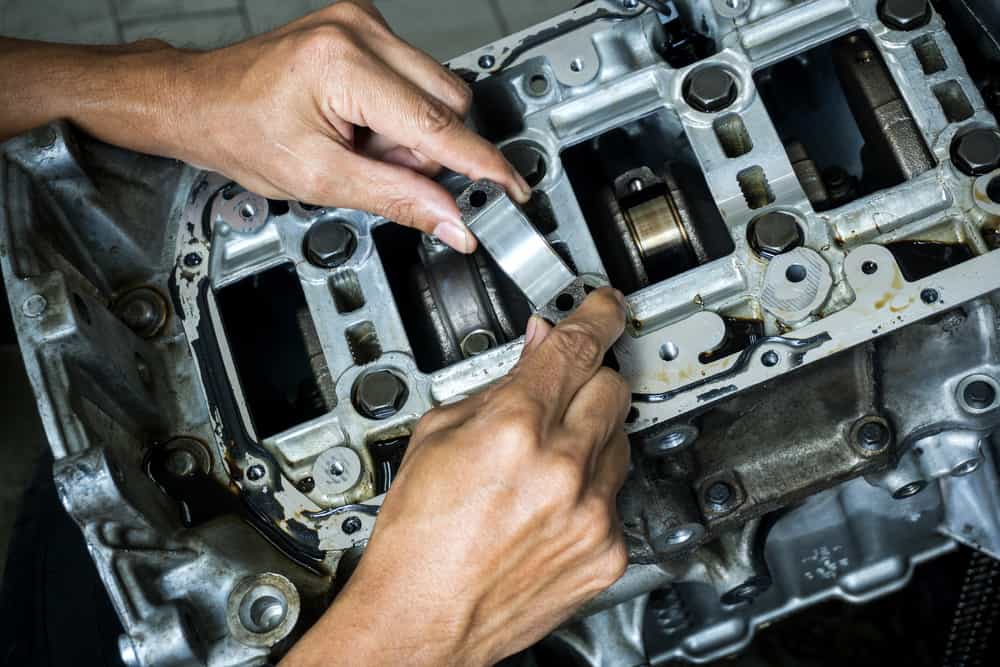 The average cost of replacing rod bearings is usually $2,000-$3,000, or about the same as rebuilding the entire engine. Here, you can expect about 8-20 hours of labor. Most bearings cost about $3-$10 each, or even less if you get them in larger packs. In addition, you’ll have to replace seals, gaskets, and oil pump seals. How Much Does Rod Bearing Replacement Cost?*

In almost every case, the only major price consideration for replacing your rod bearings will be the cost of labor. That’s because the full job will take anywhere from 8-20+ hours.

In most cases, replacing the rod bearings requires full disassembly of the engine and may even require dropping the engine.

Therefore, the make and model of your vehicle will greatly impact the total costs.

The cost of rod bearings can be considerable. However, most related costs are labor.

With most jobs taking anywhere from 8 to 20+ hours to complete, you’ll be paying your mechanic for a lot of hard work. 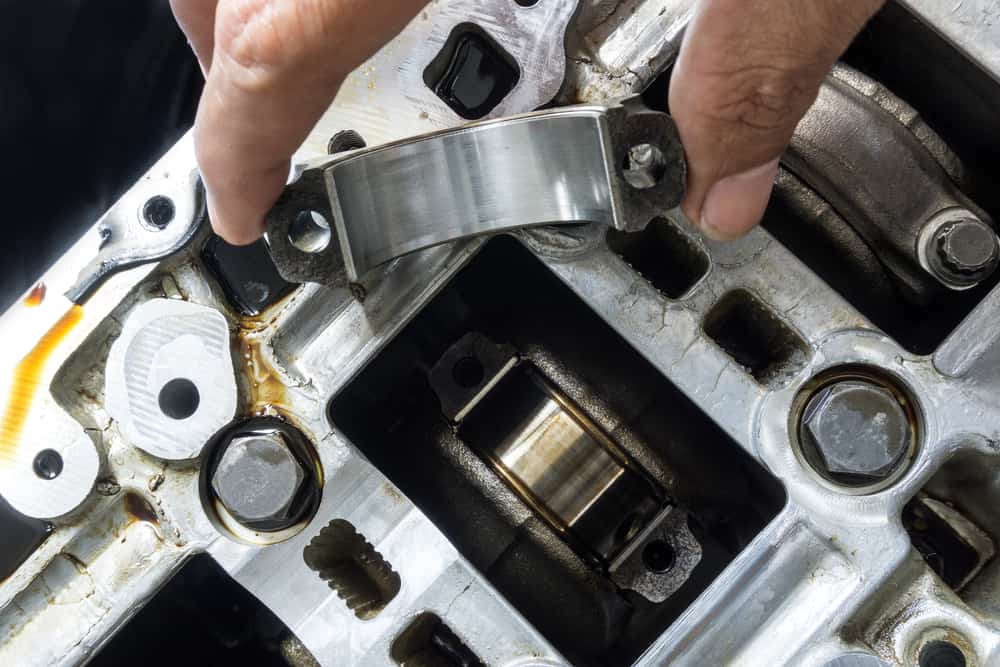 However, there are other factors that influence the cost of replacing your rod bearings as well.

However, you’ll also have to replace rod bearings. These are less important for the function of the crankshaft but should normally be replaced.

Most engines won’t have that many, but you can normally factor in about double the number of main bearings.

Bearings are cheap and range from $3-$70 each depending on brand and type. However, replacing more bearings adds to labor and total time of the job as well.

Some engines come apart very easily, may not require dropping or lifting the engine to replace the bearings, and may have plenty of clearance. This will make the job faster and easier, which will save you money.

On the other hand, some engines just require a lot more work. So, the total amount of work required depends a lot on how your vehicle was designed.

If your rod bearings are going out, it’s unlikely you can get away with replacing just the bearings. Instead, you’ll often have to replace the cylinder head bolts, gaskets, etc.

For example, if you’ve spun a bearing, it will be “fused” to the crankshaft. This means the metal literally melts into the crankshaft – and repairing it is often impossible.

Labor is almost always the largest cost in replacing rod bearings. Here, you’ll have to factor in the hourly rate charged by your mechanic, which is usually around $95-$100. However, rates vary from $15-$210 depending on where you’re located.

In addition, if you’re leaving your vehicle at the shop, you’ll have to pay lot fees. These are normally $5-$25 per day you leave your vehicle on the lot. And, with up to 20 hours of work needed, that could be several days.

4 Symptoms of a Bad Rod Bearing

If your rod bearings are going out, you’ll probably hear it before you notice anything else. 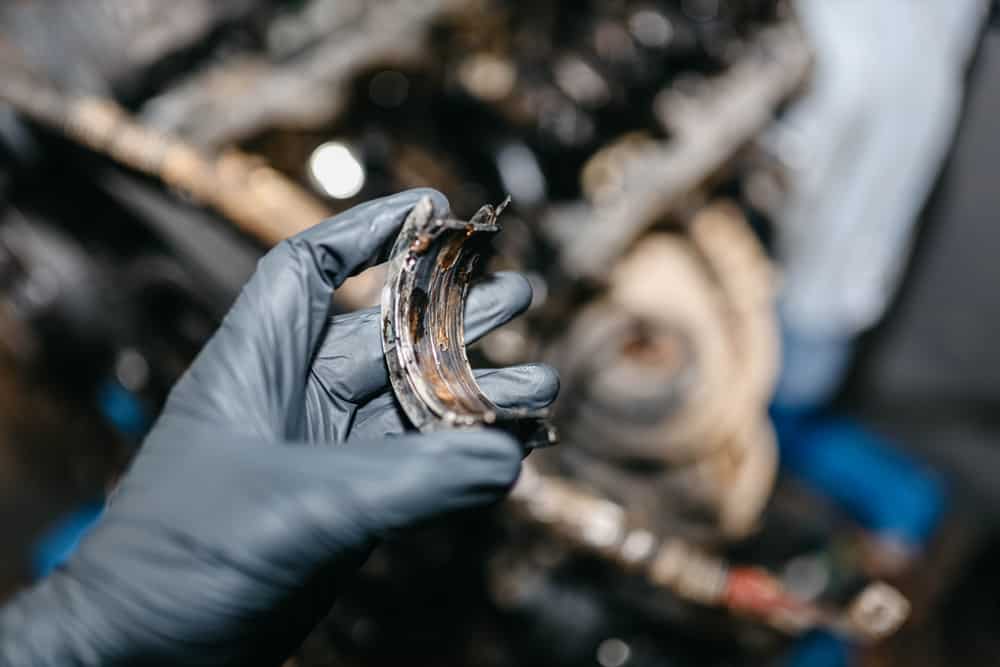 However, there are other symptoms you can pay attention to as well.

If your oil pressure is low, you keep having to change the oil because of contaminate, or you’ve got metal shavings or a silver sheen to the oil, it’s a good sign the rod bearings are going out.

Modern engines use a sealed system in which the bearings operate fully submerged in fluid to reduce friction and reduce the chances of bearing failure.

When things start to go wrong, you’ll notice shavings in the oil, thin oil because it’s contaminated with gas, or low oil pressure.

These symptoms can mostly point to other issues as well, but the first two are almost always rod bearing issues.

This happens as the engine stops and starts and if the problem is very bad, when you’re idling as well. Here, a sound like striking metal normally indicates rod bearing issues.

If your transmission is grinding or belts keep wearing out, it may be a rod bearing issue.

This happens as rods stop transferring force to the crankshaft smoothly – which means more pressure and tension on the transmission.

If your engine stops or fails completely, it may be a rod bearing issue. For example, a rod piercing the crank case is an extremely common cause of engine failure.

Of course, here, the question is if the repair is worth it or if you should just get a new short block.

Changing A Rod Bearing in 4 Steps

In most cars, you can complete a rod bearing replacement without dropping the engine first. However, that won’t always be possible. If you do have to remove the engine, rent a good cherry picker and have someone help.

It’s always a good idea to pull the engine so you can inspect the crankshaft journals and crankshaft. If these parts are worn or damaged, now is the time to replace them. Unfortunately, you can’t inspect or measure them with the engine in.

However, this is a long and difficult job. You will need some specialty tools. In addition, you’ll want to expect to spend several days on the job.

You can also choose to replace the rod bolts at this stage.

You can also optionally choose to use plastigauge to assess the bearing fitting. If so, install it before tightening the bearings together.

Otherwise, use a set of calipers and torque to your manufacturer’s directions.

If you still have questions, this FAQ should help.

Is replacing rod bearings worth it?

That depends a lot on the condition and the cost of your engine.

For example, you can often buy a fully assembled (refurbished) short block for $2,000-$3,000. That may be a better call if you’re experiencing other issues with your engine as well.

How long does it take to replace rod bearings?

Normally you can expect it to take 8-20 hours to replace rod bearings.

However, you’ll likely have to replace other parts of the engine as well. Therefore, it’s always a good idea to drop the engine and inspect everything as you go.

You’ll normally hear a knocking sound, like hitting a fork on an aluminum plate.

If it’s a deeper knocking, the issue might be the main bearings instead.

Rod bearing issues can mean the end of your engine if not dealt with quickly. Unfortunately, rod bearing replacement costs are also high, with most jobs costing between $2,000 and $3,000. Still, it’s a lot cheaper than replacing your engine and you can do the work yourself if you have the know-how.