If you’re struggling to start your car or your key is jamming in the ignition, replacing the ignition lock cylinder may be the best way to solve the problem.

That’s also true if your antitheft system isn’t working, the electronics accessories aren’t turning on when you turn the ignition, or you’re having another ignition problem. 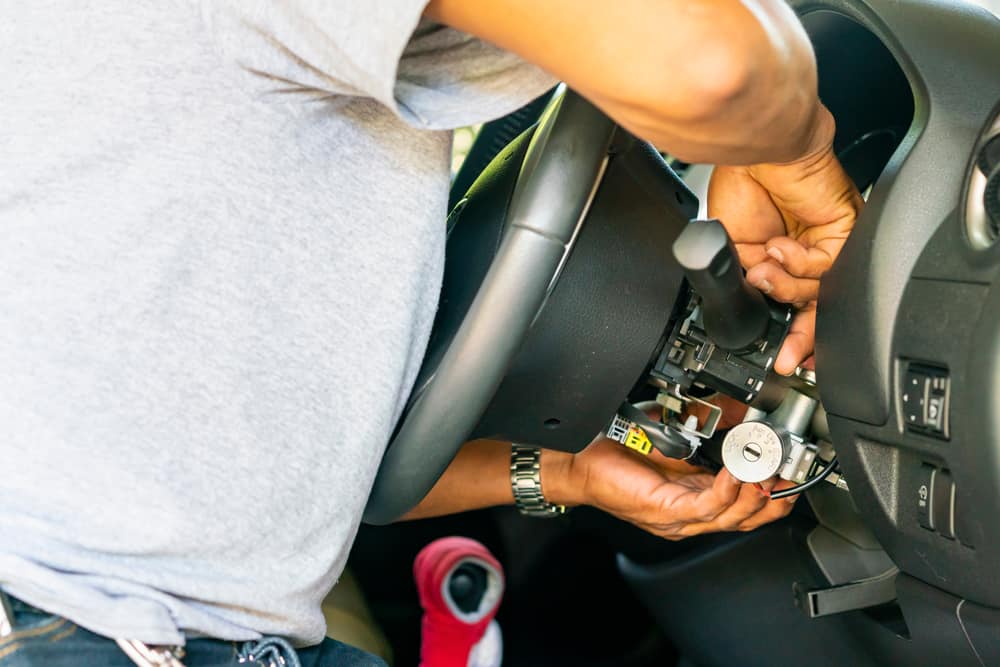 However, the average cost of replacing an ignition lock cylinder varies based on the complexity of your ignition. Therefore, you can expect to pay $100-$500+. Here, parts average $150 ($50-$700), and labor ranges between $100 and $900 depending on teardown steps. However, on average, that works out to around $300 for your average car. How Much Does Ignition Lock Cylinder Replacement Cost?*

Replacing an ignition lock cylinder can be very simple or fairly complex depending on your vehicle and its security system.

Here, both the cost of labor and the cost of the part can range significantly. That means it’s crucial to know the make and model of your vehicle to estimate costs.

The cost of replacing your ignition cylinder will largely depend on your car’s security system. For example, the newer your car, the more likely it is your antitheft system will have to be reprogrammed to work with the key.

In most cases, you’ll also have to consider what kind of ignition system you have and what the steering column looks like. Therefore, the make, model, and even year of your vehicle can have a significant impact on the total cost.

The cost of an ignition cylinder can range from under $10 to well over $1,000. Here, costs often depend on the complexity of the part.

For example, the most basic ignition cylinders aren’t much more complex than those in a door. They’re cheap and largely just made to allow you to turn a key.

The most expensive ignition cylinders can be rekeyed or recoded, feature electronics to program them to the anti-theft system, and may also feature anti-theft or remote start technology. Therefore, the cost of an ignition cylinder ranges from about $11 to well over $1,000.

In most cases, you can expect a middle ground of about $150-$250 for an Original Equipment Manufacturer part for most vehicles. On the other hand, if you have a luxury vehicle, you will expect to pay more.

For example, some ignition cylinders offer more features or added security. Others are designed to help you cut costs to make the replacement cheaper.

Aftermarket parts usually cost between $11 and $1,000. Here, universal parts are those intended to fit in any compatible engine and made-to-fit parts are those made for your vehicle’s system.

If you have an electronic locking system or remote door locks, you’ll have to rekey your system to the new keys. That can cost $100-$200 per key.

In some cases, the only place you can have keys programmed is at the dealership. That’s a theft prevention method, where the dealer wants to be able to verify your identity before programming the new key.

If you already have the old keys, your mechanic may be able to do so as well, but not for all vehicles.

In most cases, it takes 1-4 hours to replace an ignition cylinder in a car. That means you’ll pay for about an hour of labor plus shop fees, at the national range of $15-$205+. In almost every case, you’ll pay at least $60 for labor.

In addition, there are several types of ignition systems. For example, the simplest ignition cylinders can be removed by inserting the key into the ignition, turning it to release the steering lock, and depressing a pin under the steering lock.

More complex ignition systems require you to take off a panel in front of the steering wheel first and then take the cylinder out.

The most complex systems require that you disable the airbags, drop the steering column or remove the steering wheel, remove anti-theft bolts, and then reprogram the anti-theft system. This can take as long as 6 hours.

This does mean you’ll have to check with your mechanic before you get a good idea of how much the job will cost. In addition, many vehicles require programming at a dealer to work with new keys.

You might also need a scanner tool to clear the error codes generated by the new lock cylinder before you can drive. Therefore, you might be forced to take this job to a mechanic.

If you replace your ignition cylinder, you’ll be left with two sets of keys, one for the car door and one for the ignition.

Some people prefer to replace the door locks at the same time to get rid of this issue. However, doing so will greatly increase the time and cost of labor involved.

In addition, you’ll have to pay for four new door lock cylinders in addition to the ignition cylinder. That will greatly increase costs.

In fact, it normally costs between $200 and $300 per door – if you have the work done by a mechanic. For that reason, many people opt to have two sets of keys.

If your ignition cylinder is going out, most symptoms overlap with a bad ignition switch, a bad starter, or a bad key. Here, it may be important to get a diagnostic.

You should also always remember to try your spare key – because many of these problems can be caused by the electronics in your key failing. Here, the key won’t send the proper signal to the car and won’t be recognized as your key.

You’ll have to either replace the electronics, the key, or have it reprogrammed.

If your car is not starting, cranks very slowly, or intermittently starts, it may be an issue with the ignition cylinder. Here, the problem is most likely corroded electrical connections.

This may be fixable without actually replacing the ignition cylinder – but you’ll still have to take it out.

If your electronics aren’t turning off when you take the key out, it’s likely an issue with the ignition cylinder. Here, the cylinder might not be registering when the key is turned all the way into the off position.

It might also be jamming just before off. This normally means the electronics stay on and your battery drains.

3. Key is Stuck in Ignition

If your key is stuck in the ignition and won’t come out, it probably means the lock mechanism in the cylinder is jammed or broken. This might be an issue you can fix by cleaning the system.

However, you’ll still have to take the cylinder out to be sure. On the other hand, if your key is broken off in the cylinder, you’ll likely have to replace it, simply because you won’t be able to get it out.

If the key goes into the ignition but doesn’t turn, it’s likely an issue with the mechanism jamming up. However, this might also be an issue with your electronics in the key.

Consider trying your spare key before you take the car to a mechanic or the dealer.

If you can turn the key but the starter doesn’t make noise, you might have an issue with the ignition system.

However, it’s extremely difficult to tell if this is a key issue, an issue with the cylinder, a wiring issue, an ignition switch issue, or even a starter issue. You might need a diagnostic scanner to be sure.

How To Change An Ignition Lock Cylinder: 6 Steps

If your car has a replaceable ignition lock cylinder, you can attempt to do the work yourself. However, in some cases, you won’t be able to.

For example, some vehicles have the lock cylinder attached to the housing. In this case, you might have to replace the full housing to replace the cylinder.

Additionally, your vehicle’s anti-theft system might have to be programmed at the dealership. In this case, you won’t be able to start your car after changing the ignition cylinder.

Check your vehicle’s manual or call your dealer to verify.

This guide assumes you have a standard clip-in ignition cylinder. If you have to disable the anti-theft locks, you may need a scanner and dealer codes to do so.

It’s always a good idea to double-check before you start taking things apart.

The first step to replacing your ignition lock cylinder will always be determining how to take it out. Here, you should normally consult your manual – because many vehicles have very different processes.

Disconnect the vehicle’s battery from the negative post – but make sure you have the key on you when you do so, because most vehicles automatically lock the doors and windows when you cut power.

In most cases, you’ll have to follow up by using a scanner tool to clear all of the error codes that show up. Otherwise, you might not be able to drive.

What if you have a modern electronic ignition system? Unfortunately, you cannot change this without dealer codes.

Therefore, the newer your vehicle, the more likely it is you’ll have to take your car in to the dealer to fix an ignition issue.

If you still have questions about replacing your ignition cylinder, these answers should help.

Can a locksmith replace an ignition cylinder?

In most cases, a locksmith cannot replace an ignition cylinder. However, they may be able to.

Replacing the ignition cylinder normally means clearing error codes. If you have a modern car, it also means reprogramming the lock and the keys to the anti-theft device. That will mean using dealer codes.

Unfortunately, your normal locksmith won’t be able to do this.

How long does it take to replace an ignition cylinder?

In most cases, you can replace an ignition switch in 1-2 hours. However, in some cases, it can take up to 6.

Normally, this depends on how much of the vehicle you have to take apart to change the cylinder.

Can a bad ignition lock cylinder cause no start?

Yes. A bad ignition lock cylinder can prevent the ignition from turning, can fail to pass on power, and can cause other issues.

Therefore, it can cause a no-start.

The ignition switch is the electronic part that sends power to the vehicle when the cylinder turns.

The cylinder is the tumbler your key slides into and turns to make that connection. These are replaced separately – although some units have them as part of the same housing.

Replacing an ignition lock cylinder might be a simple process. On the other hand, it might not be. Therefore, the costs and time involved can vary significantly.

Here, you can expect to pay $300 for most vehicles but costs can go well over $1,000 – especially for a newer vehicle. That’s especially true if you have to program new keys or if you want new door keys as well.