The rear main seal is a small metal disc with a rubber seal. This seal is designed to seal engine oil into the engine where it connects to the crank shaft.

Unfortunately, with age, rough conditions, or random accidents, the seal can degrade, harden, and crack. This eventually causes leaks around the seal – which continue to get worse until you replace the seal.

That can cause significant engine damage because of overheating, oil leaking onto the clutch if you have a manual transmission, and even engine burnout.

Therefore, the best option is to always replace your rear main seal as quickly as possible. 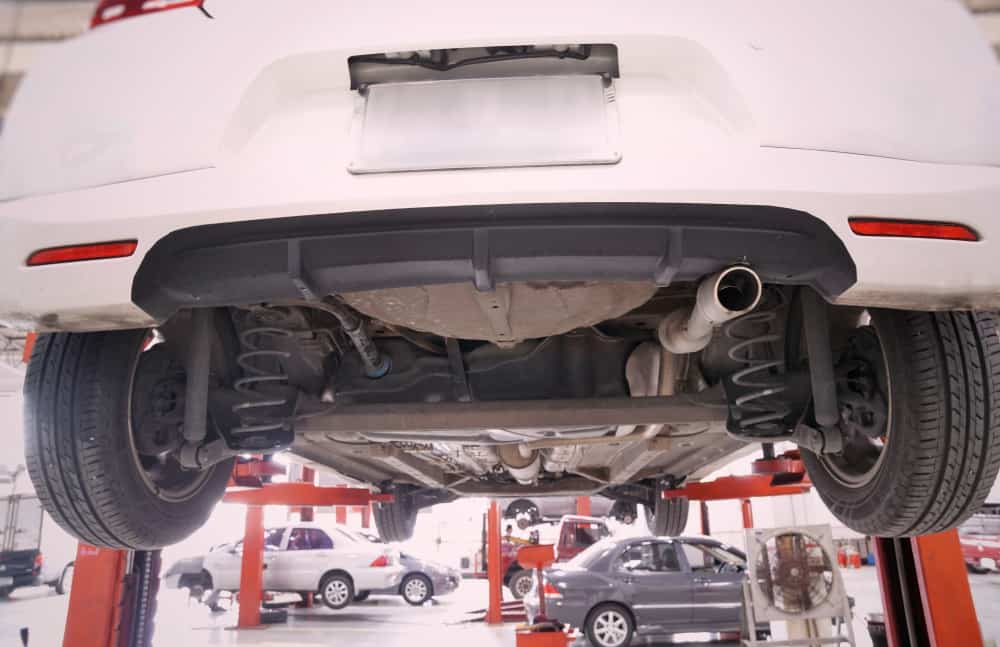 How Much Does Rear Main Seal Replacement Cost?*

The rear main seal itself is usually extremely cheap. In fact, in most cases, you can get the part for under $50. After all, a rear main seal for the crankshaft is just a piece of metal with rubber on it.

In addition, depending on your engine, you might have to remove the transmission, the crankshaft, the camshaft, and the valve covers.

Here, the largest factor is labor costs. However, the actual costs depend on your make and model of car. Why? Engines are built differently.

We’ll go into the different possible costs of replacing the rear main seal below.

Depending on your engine, you can take anywhere from a few hours to well over 8 hours to remove the transmission and install a new main seal.

Depending on the make and model, you might have to take off the cams, cam seal, the engine, the transmission, the clutch, the clutch release, and other parts.

Of course, if you have an automatic transmission, you’ll have fewer parts to take out. On the other hand, you’ll always have to replace the transmission fluid afterwards.

All of this means that replacing your crank shaft seal is extremely expensive. In most cases, you’re looking at a minimum of 8 hours of work.

In other cases, your transmission might come out fairly easily. For example, some Toyota models make it relatively easy to pull the transmission out and to replace the seal.

Here, you’re probably looking at 3-4 hours of work instead. In either case, the labor is the largest part of the cost.

Mechanic and garage rates can vary significantly. On a national basis, those rates range from $15-$210 per hour. That works out to an average of $60 per hour.

However, it remains true that the rate per hour depends on geographical area. You’ll also have to consider if you’re going to a dealer (more expensive) or a local shop.

For example, if you have a rare vehicle, you might not be able to find a local mechanic who can service it.

In addition, you’ll likely pay garage rates. This is the rate you pay per day of your vehicle taking up space in a mechanic’s garage.

In most cases, your main seal replacement will take several days. This means you’re looking at an average of 2 or more days of garage fees.

However, this rate is normally worked into the quote. In addition, many garages don’t charge the fee at all.

Your car’s make and model will have some impact on the cost of the parts. However, this is likely to be very small compared to the cost of labor.

For example, if you have a performance or sports car, your replacement ring might run as much as $200. In most cases, you’re looking at rates between $25 and $60.

In addition, Autoparts stores and Walmart or Amazon will almost always have aftermarket alternatives. These can cost as little as $10.

If your mechanic tears down your vehicle and discovers other damage or other leaks, it will cost more. In addition, it’s sometimes a good idea to replace other parts while you have your transmission out.

For example, if you know the clutch is nearing end-of-life, replacing it while the transmission is out could save you a considerable amount of money over pulling the transmission out again later.

Of course, that depends on your vehicle’s age and condition.

If the rear main seal is out, you’re leaking oil. That usually means you’ll see oil, the oil engine light, or you’ll even see smoke.

While most of the symptoms of a bad rear main seal are difficult to rule out as being other issues, you can always look for them and then follow up on the source of the issue.

1. Dripping or Puddles of Oil

If you’re seeing puddles of oil under your car, there’s always an oil leak. Here, you normally want to start out by ruling out the more common sources of an oil leak.

For example, you can take out the spark plugs and check to see if they are oily. If they are, the source of the leak is likely in the valve cover gasket that’s leaking.

If there’s no oil on the top of the pan, the leak likely comes from the oil pan gasket. From there, you can work out whether the oil is coming from the crank shaft seal or not.

Unfortunately, you can’t see this seal during a vehicle inspection. So, you’ll have to put on gloves and feel inside of the housing. If your gloves come out oily, it is leaking.

In addition, you can check for oil on the engine side of the flex plate and on the flywheel. If there’s oil on either of these, it’s probably from the rear main seal.

Unfortunately, this will always require a manual check and there’s no way to tell if you have an oil leak in another place without first checking that.

If your engine is smoking, there’s a high chance that it’s because of an oil leak. Here, you want to pay special attention if the smoke is blue.

Here, you’ll have to go through the same diagnostics as listed above. After all, the leak could be from anywhere.

However, oil leaking onto the clutch and crankshaft can overheat and smoke. In the case of the clutch, it can also cause major issues and might result in you needing to replace the clutch.

If your check engine oil light keeps turning on, you might have a leak. That’s also likely to be true if you keep running low on oil.

On average, oil should not burn off at any appreciable speed. If you have to keep topping up your engine, you have a problem.

Most importantly, that problem can damage the rest of your engine. It can also cause a burnout if you don’t keep up with the engine oil loss.

How To Change a Bad Rear Main Seal: Step by Step

Changing a rear main seal often means removing the transmission or the engine. These parts are heavy and should be handled with care.

It is important that you do not attempt to take them out without the tools to lift and put them back into place.

Importantly, this guide does not cover the steps to remove the parts to access the rear main seal. That’s because this varies significantly based on your engine.

For example, if you have a Jeep Cherokee, you can access the rear main seal fairly easily. Here, you’ll have to remove the oil pan and the girdle.

The difficulty of removing the bearing cap depends on factors like:

The fact that getting to your rear main engine seal requires vastly different amounts of effort is why most mechanics won’t offer a clear upfront quote until they see your vehicle.

However, once you get your transmission out and can access the bearing cap and rear main seal, actually replacing the seal should take a few minutes.

Always make sure you re-fill the engine oil after installing your new seal. Finally, you might also have to replace the transmission fluid if you took out the transmission.

Replacing the rear main seal is complicated and it can involve a lot of different parts. It’s logical you’d still have questions.

Is it OK to drive with a rear main seal leak?

In most cases, it’s perfectly safe to drive with a rear main seal leak. However, it is crucial that you keep up with your oil levels.

If oil gets too low, it could cause overheating or even an engine burnout. In addition, leaking oil is expensive.

It might also be dangerous for wildlife and for other drivers. Therefore, it’s usually not a good idea to leave the problem alone for a long time.

In addition, your leaking main seal will get worse. That’s especially true if you have a manual transmission. Here, the rear main seal can leak into the clutch, which can cause other issues.

It’s unlikely that your rear main seal leak will go from light or moderate to completely broken or major very quickly. However, it will always escalate over time.

Can you replace a rear main seal without removing the transmission?

That depends on the model of car. In some cases, if you have a two-part rear main seal, you can replace it without removing the transmission.

Check your owner’s manual to be sure.

How many hours does it take to replace a rear main seal?

In most cases, you should expect to spend a full day on the job if you know what you’re doing.

Will a bad rear main seal cause low oil pressure?

A bad rear main seal causes your engine to leak oil. This might affect oil pressure by causing the oil to drop too low.

As long as you keep up with that, it should be safe to drive. However, it’s always a good idea to have the problem fixed as quickly as possible.

Labor normally costs your mechanic’s hourly rate times however long it takes them to get the parts out. If you have to remove the clutch, clutch valve, transmission, and crank shaft, that can be quite a bit of time.

However, changing the rear main seal is something you can do yourself if you have the tools and the ability to lift the engine or transmission. That can reduce the cost of your repair down to a very manageable $10-$60.

On the other hand, replacing the transmission and engine is a significant amount of work and you should not attempt it unless you know what you’re doing.

Good luck getting your engine fixed.