The compressor changes the coolant in your air conditioner into a gas, which can be pushed through the vents of the air conditioner, to effectively cool air flowing through it.

Once it fails, you’ll just get hot air. And, if you can’t fix it, you’ll have to replace it. 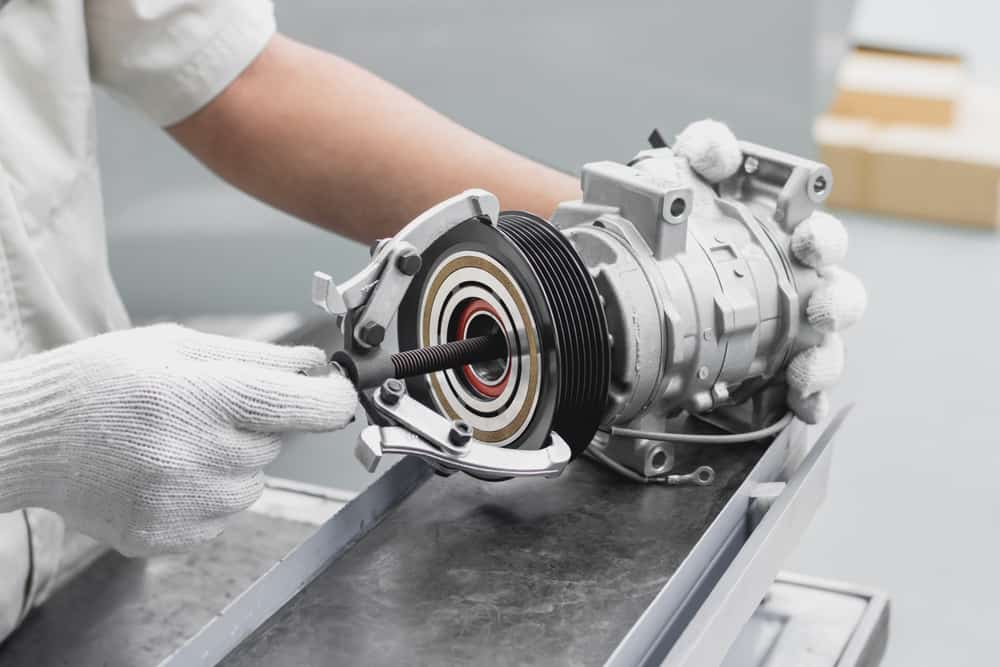 How Much Does AC Compressor Replacement Cost?*

The largest aspect of replacing an A/C compressor is the cost of the part. These can be considerably expensive, with some OEM parts costing over $1,000.

In addition, you’ll pay labor costs, which might include taking out parts over the compressor in the engine.

The following chart details estimates for replacing the compressor in 10 popular vehicles.

The largest cost factor in replacing an AC compressor is the part itself. However, the cost of labor can be as much as the part – especially if you’re paying a higher-end mechanic.

Other cost factors can also be important, especially depending on if you have to replace the condenser and the clutch as well.

The make and model of your vehicle affect several aspects of the cost of replacing the AC’s compressor. For example, it directly affects the cost of the part.

If you buy original equipment manufacture, the car’s manufacturer directly controls the price of the new part. Normally, that’s going to be around $600+.

Also, if you see the chart above, the lower-end range of parts is almost all aftermarket.

In addition, your vehicle’s engine will impact the cost of removing the old part and putting the new one in. For example, if you have an engine with the AC compressor on the top, you can easily replace it in an hour or two.

If you have to remove the fan belt and pulleys to get to it, the work could take significantly longer and may require re-timing your engine.

Another consideration is that you can purchase a secondhand, aftermarket, or remanufactured AC compressor. This can reduce the cost of the part to as little as $95-$400. That can be considerably cost-saving.

However, you might not be able to get your mechanic to do the work for you. So, if you want to have your compressor replaced in a garage, you’ll normally have to buy it through the garage, which limits the availability of parts.

Your mechanic’s rate will likely be one of the most influential costs of replacing an air compressor.

Depending on the vehicle, the job can take 2-6 hours, so you might pay for a full day. That often means paying $15-$200 per hour plus a shop fee.

On average, the cost to replace an air conditioner compressor is about $350, but costs can go over $800 depending on the vehicle and where you take the car.

If you do the work yourself, you can save as much as half of the total cost. However, replacing an AC compressor can be complex if the belt affects the tension belt or the timing belt.

Parts Around the Compressor

If one part of your AC compressor is bad, you’re usually recommended to replace the full thing. That’s because the part itself usually fails at about the same time. If the belt is out, the plate may have issues, etc.

In addition, many mechanics will simply recommend that you replace the full AC system when your compressor goes out. That’s because it’s difficult to correctly diagnose a compressor problem versus another issue in the AC.

And, because compressors normally last for 10-15 years, it’s unlikely that the compressor would significantly outlive the rest of the parts in the system.

So, if your compressor is no longer under warranty, your mechanic may recommend that you simply replace the full system. This will increase the cost to about $1500 total.

On the other hand, it may not be necessary. You’ll want to discuss options with your mechanic before making any decisions.

5 Signs of a Bad AC Compressor

If your AC compressor is going out, you’ll notice because it will stop working.

However, there are a few other symptoms you can look for, some of which start to crop up a bit sooner than full failure.

If your compressor is starting to fail, it will either stop or inefficiently convert the liquid coolant into gas. That means the coolant will inefficiently move into the lines. You’ll either get hot air or warm air.

Your air conditioner will normally start showing signs of failure by being warmer than usual, e.g., if you have to turn your AC up higher than usual to be comfortable.

Unfortunately, you won’t likely notice that right away. And, if you do, there’s often not much you can do about it.

If your AC is squealing, rattling, or clunking, it’s a good sign that something is wrong. Here, problems can also impact the rest of your engine.

For example, if the compressor belt interacts with the timing belt or the tensioning pulley. A loose belt could cause damage to other belts and could knock them loose. That could seize your engine up.

On the other hand, noises from the AC can simply mean the clutch is seizing up at awkward moments. It could also mean that the wobble plate is loose and rattling around.

However, no matter what the noise, any noise coming from your AC other than gentle air is usually a bad sign. If you hear noises, have the system inspected.

If your wobble plate isn’t shutting down or the compressor clutch is stuck open, you might not be able to turn your AC off.

You’ll also note that air might stay cold, even if you turn the temperature up. This issue is a lot rarer than issues with hot air.

However, it’s a good sign that the clutch is off, that the fluid lines are clogged and the coolant can’t get back into the reservoir, or that you have another similar issue.

If your car keeps tripping the circuit breaker, it’s a good sign that something is going wrong with the compressor.

Each of these issues may be fixable without replacing the compressor, however, they may not.

Your compressor uses bearings to allow it to wobble properly while keeping the coolant fluid pressurized. If those bearings start to fail, your AC compressor will start to leak.

Once that happens, you’ll have to replace the compressor or the bearings to get your air conditioner back in working condition.

And because refrigerant fluid is toxic to humans and to the environment, it’s important to fix the issue before topping up the coolant.

If you want to replace your AC compressor yourself, you may be able to do so. However, not all vehicles have the AC compressor in the same place.

On average, you’ll see the compressor when you pop the hood. It’s the pulley and belt with the plate, sticking up from the top.

It is usually bolted right into the top of the engine, usually just under the timing belt – which is the large vertical belt running through the engine.

If you can see that when you open the hood, that’s your compressor and you can replace it. If it’s under the belt, replacing it will be more work. This guide assumes you have the first option which is the most common.

The first step to replacing your AC compressor is to drain the refrigerant from your car. Normally, you’ll need a machine for this.

However, you can take your car to any mechanic and have them pump the refrigerant out. This is important because coolant is dangerous to handle without proper equipment.

Once that’s finished, you can easily drive home and do the rest of the work yourself.

It’s always a good idea to flush the air conditioner system before running the new compressor. However, you can’t do this without a vacuum pump. If you don’t have one, have your mechanic do it.

In most cases, an air conditioner flush will cost $40-$120 including new refrigerant. You can also have your system topped up at this time.

If you still have questions about replacing an AC compressor, the following answers may help.

How long does an AC compressor last?

In most cases, an AC compressor will last the full lifetime of the car. On average, that means 8-10 years.

It’s unusual for AC compressors to fail, so if yours does, it’s important to inspect the full system to find out why.

Can a bad AC compressor cause engine problems?

If your AC compressor is interfering with the timing belt or the fan belt, it could.

However, in most cases, a bad AC compressor won’t otherwise affect your vehicle.

How long does it take to replace AC compressor in car?

You can normally replace an AC compressor in 2-4 hours.

Depending on the car, that might be more or less time, but 2 hours is a good ballpark.

Replacing your car’s AC compressor can be costly, even if you do the work yourself. In most cases, you can expect to pay a minimum of $150 for an aftermarket compressor.

On the other hand, if you’re replacing an AC compressor with an OEM part, you’ll probably pay around $600. In addition, you’ll pay for 2-6 hours of labor, unless you do the work yourself.