If your car isn’t starting for whatever reason, it could be a result of dozens of issues. However, if the starter itself is faulty, replacing it is normally the way to go.

However, you’ll still get have to choose between a rebuilt or a new model, and labor will be a large part of the cost. 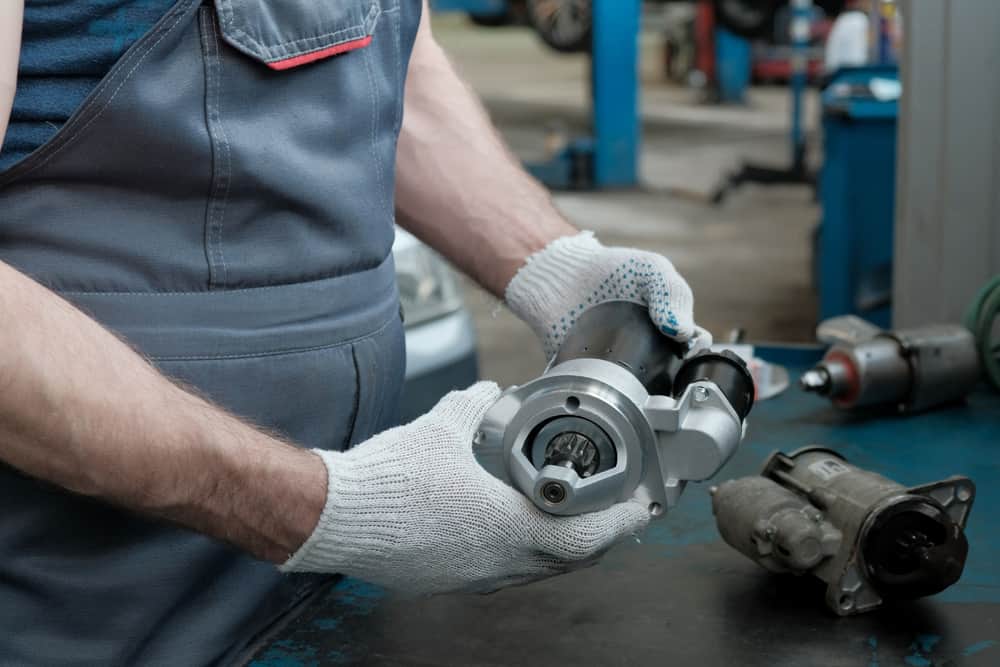 The table below shows a quick price comparison of starter replacement cost estimates from reputable suppliers:

How Much Does Starter Replacement Cost?*

In most cases, a replacement starter costs from about $80 for a new build. However, the large percentage of the cost is labor.

Unfortunately, labor costs almost entirely depend on the make and model of the vehicle – because you might have to take apart a significant part of the engine or the steering assembly to get the new starter in place.

For example, the following estimates show average costs for replacing a starter in different car models. 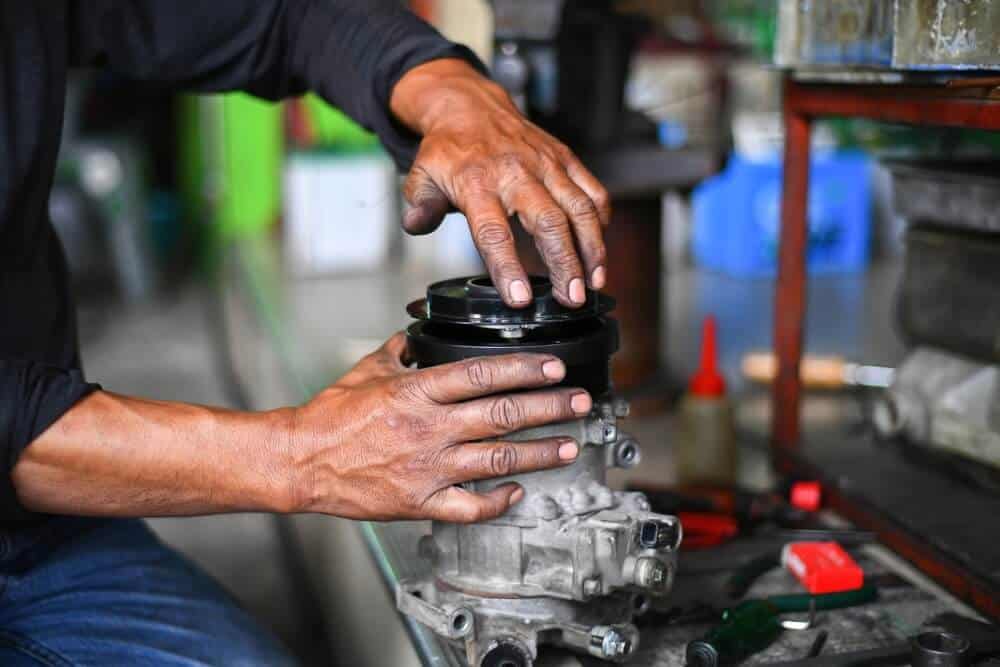 The cost of replacing your starter primarily depends on how long it takes to remove the old starter – which depends on engine build.

Otherwise, you’re also looking at cost factors like your mechanic’s rates, the condition of the starter, and the brand of the starter.

Your mechanic’s rate is the most important cost factor for many starter replacement jobs.

For example, if your mechanic charges $200 per hour and you’re paying for 1.5-2 hours of labor, plus shop fees, you’re looking at around $450 in labor alone.

Nationally, you can expect to pay anywhere from $15-$205 per hour for a mechanic, so your local rates will vary considerably. If you don’t know what your mechanic charges, you can call ahead to ask.

In most cases, you can replace a starter in about 1-2 hours. However, some vehicles will require more work.

If you buy an original equipment manufacturer starter from the dealership, you’ll usually pay anywhere from $350-$900 for the starter alone.

That’s especially true with brands like Honda and Audi, who charge more for starters than many other auto manufacturers. Others like Toyota and Ford are relatively inexpensive when purchased OEM.

However, you can also choose to buy replacement starter motors rebuilt.

A remanufactured starter is one that was removed broken, and which has been repaired to meet or exceed original equipment manufacturer specifications. These normally start at around $50 and rarely go over $200, even if the original motor was expensive.

In addition, you can purchase made-to-fit brands, which are designed to fit into popular vehicles. Aftermarket starters won’t be available for all cars, however, they are for most or nearly all cars – which gives you a cheaper alternative than a new OEM.

Finally, it’s almost always possible to simply buy a secondhand starter. If your vehicle’s make and model is in your local junkyard, chances are, you can get the new starter for as little as $25-$50. Of course, there’s the caveat that you don’t know how reliable this part is.

In addition, your mechanic might not install the part unless they buy it through their own service.

Finally, vehicle teardown can be a significant factor in the cost of replacing a starter motor.

For example, many engines make the starter accessible, and you’ll be able to take it out and replace it within about an hour. In others, you might have to take out the throttle body, the valve and gaskets, or the full ignition assembly including spark plugs to access the starter.

The latter is unlikely. However, the time to tear down the starter might go up to 3-4 hours, which will significantly add to costs.

6 Signs of a Bad Starter 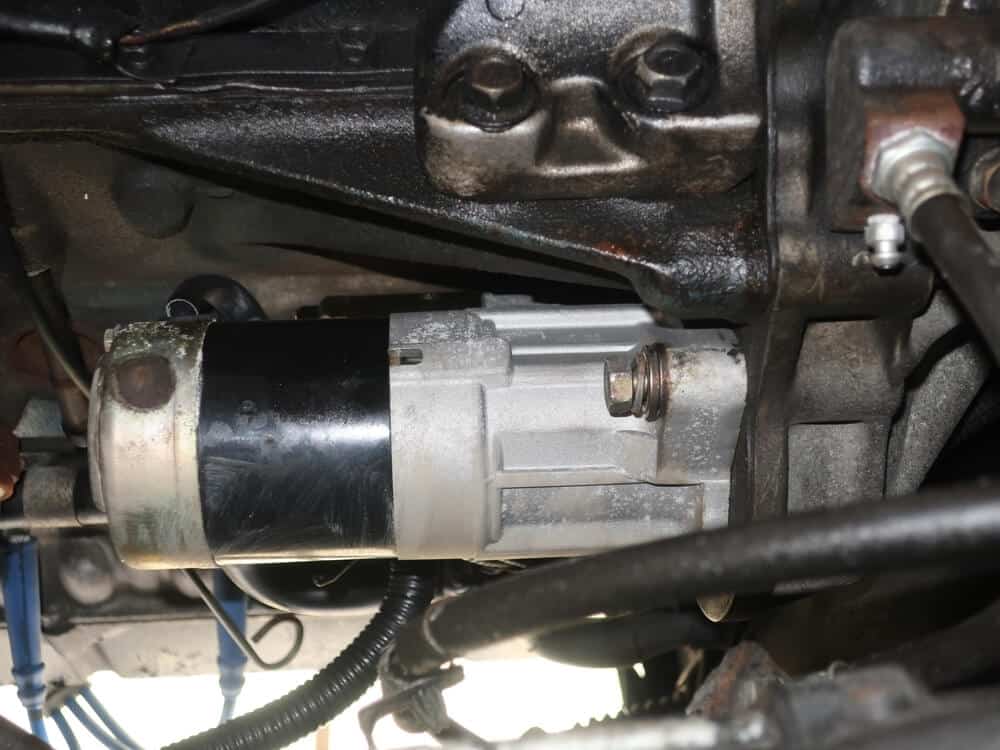 If your starter is going bad, you’ll likely notice and quickly. However, symptoms of a bad starter aren’t always as simple as your engine refusing to start.

In fact, early warning signs like clicking, battery issues, and the starter continuing to run can be great ways to diagnose a failing starter before it leaves you stranded somewhere.

Normally, this means the starter relay is stuck, broken, or otherwise not working. However, you will almost always hear grinding from under the vehicle, as the starter motor continues to run.

This is bad for the engine and for the battery, because starters use a significant amount of power.

Therefore, you’ll have to fix the issue by replacing the starter. Can you just unstick the relay? Normally when it becomes jammed, it overheats and welds together, normally meaning you’ll need a new starter.

In addition, if you try to drive with the starter running, it could damage the ignition and the transmission flywheel, resulting in thousands in repair costs.

In this case, it’s always better to call your mechanic immediately and see if they recommend driving to them or calling a tow truck.

If your ignition fuse keeps blowing or short-circuiting, it usually means the ignition switch is having problems. Here, you might even see white smoke coming from under your engine (electrical smoke).

This happens when the system overheats and a critical point melts or catches fire, or if the fuse blows. This is always a sign that power is not being transferred out of the starter motor properly, which means the engine does not start.

When you keep trying, the engine might eventually start, but the starter motor overheats, and something might blow up.

3. No start with an engaged starter

If your starter is engaging but your car isn’t starting, it’s a good sign something is wrong with the starter.

Here, you’ll normally hear the starter grind, whir, or otherwise kick in. Sometimes these issues may be intermittent. Sometimes they’ll be persistent.

In either case, it’s a good idea to have the starter checked. Here, you’ll also want to check the flywheel, the gears, and the spark plugs.

If your lights and headlights are working but the engine won’t start, the battery is usually the first thing you check.

But, if the battery reaches a charge of 12.4 volts and you can charge it, it’s probably not the battery that’s the issue. Instead, your starter is pulling too much or not doing anything with power – which can cause the battery to keep failing.

In this case, it’s always a good idea to test the battery and hopefully test with a spare battery to make sure the issue is actually the starter.

Your starter will normally grind on start. However, it shouldn’t click, whir, tick, or grind very loudly. In fact, if you hear any unusual noise from your engine, it tends to be a cause for alarm.

If your starter is making weird noises, you should always go have it checked. Here, heavy grinding noises are usually a sign that the gears aren’t engaging properly.

E.g., if your starter produces the same noises it does when you engage it with the engine already running but when you’re starting the vehicle, you have gear issues. You could also have flywheel issues or the starter simply failing to engage in other ways.

If you can turn the key and hear the starter grind but the engine doesn’t turn over, it might be the starter failing to relay enough power to actually start the engine.

However, this issue could also relate to spark plugs, the engine timing, or even a dead battery.

Here, you’ll want to assess the issue before jumping to conclusions, because it can relate to several somewhat unrelated issues.

Before you get started, it’s always a good idea to park your vehicle on a flat and level surface. You’ll also want to ensure that you chock the back wheels.

Finally, turn the engine off and take the key out of the ignition. This is important because many modern cars lock all of the doors and windows when you cut the power. You’ll need the keys to get back in.

How to replace the starter:

From there, you can start and test the car after you put the battery terminal on and lower the jack. Most vehicles allow you to replace the starter from the bottom.

If you can’t, you’ll normally have to take off the throttle body or some other part that is in the way. Most vehicles are designed around allowing you to replace the starter if something does go wrong, so this shouldn’t be an issue. However, it may be.

Therefore, you should always inspect your vehicle before taking it apart.

If you still have questions about replacing your starter, these answers might help.

Can you jumpstart a car with a bad starter?

No. Unfortunately, if the starter is bad, it doesn’t matter how much power it’s pulling from the engine, it won’t transfer that power.

However, if the issue is a bad battery and not the starter, you can normally jumpstart the car.

Yes. Starters are motors. They can burn out at any time. In addition, wiring, fuses, and even the levers can break at any point.

Therefore, your starter could go from functioning to dead in the course of a few minutes. Of course, something has to be off to cause that to begin with, but you’ll likely not notice that.

How long does it take a mechanic to replace a starter?

However, timing depends on the starter, whether or not the mechanic is familiar with the vehicle, and whether the starter is blocked by other parts of the transmission or engine.

Replacing a starter normally costs between $500 and $800. If you do the work yourself, it can cost as little as $100. However, rates can go well into the thousands, depending on your vehicle and the model.

In most cases, you can complete the work in 1-3 hours.