The purge valve or purge solenoid is an electrically opened solenoid that pulses to allow fuel vapor out of the charcoal canister and into the engine, where it’s burned off.

If yours isn’t working, it’s likely causing engine power and performance issues. Unfortunately, when this happens, you’ll normally have to replace the solenoid completely. 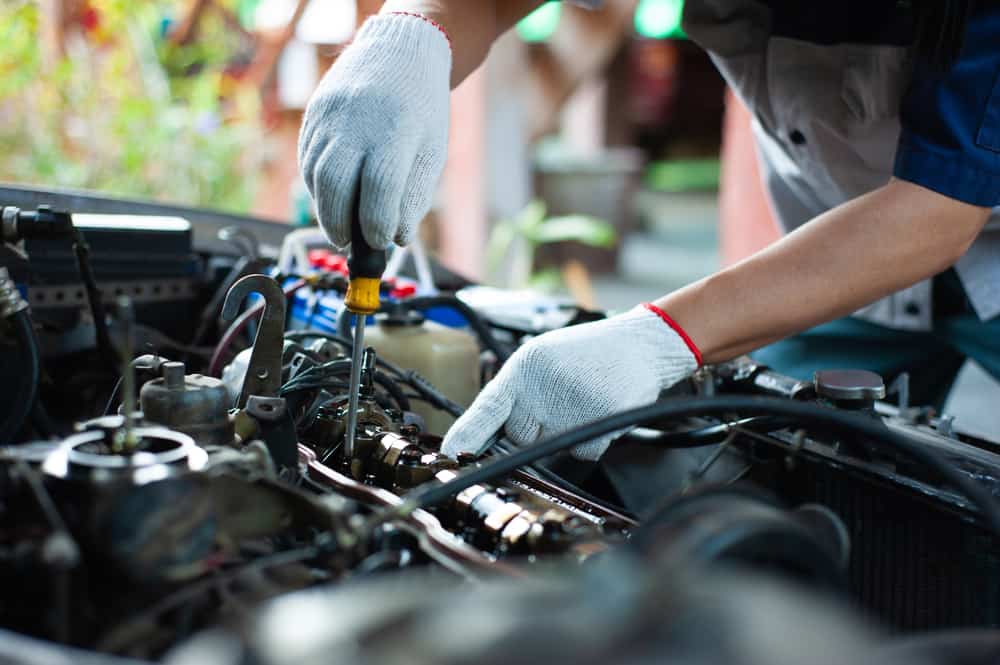 Here, the average cost of replacing a purge valve is about $150 although you might pay up to $200. Here, you’ll normally pay $20-$120 for the part and for an hour of labor, which averages $60-$200. However, labor time also depends on whether your purge canister is located on top of the engine or the fuel tank.

In most cases, you’ll pay around $150 to replace your purge canister solenoid.

However, costs depend on factors like the make and model of your vehicle, the location of the part, and your mechanic’s rate. For example, if you buy OEM parts, some purge valves cost over $200 new.

The following cost estimates look at rough costs for a new valve by make and model of car.

In most cases, the make and model of your car is the most significant factor in the cost of replacing your purge canister solenoid.

However, other factors like your mechanic’s rate, the type of solenoid you buy, and the location of your purge valve are also important.

Location of the Purge Canister

If your purge canister is located on top of the engine, you can likely take the solenoid out and replace it in 20-30 minutes.

While most mechanics will still charge you for an hour of work based on minimum rates, you’ll pay the absolute minimum for their time.

On the other hand, your purge canister might be located under the engine. Here, it’s likely very close to the fuel tank.

In some rare cases, it will be located above the fuel tank. Therefore, it might take an hour or a bit longer to take the solenoid out.

In either case, you’re not spending too much on labor. However, a solenoid located under the engine can cost as much as 2x the rate in labor to replace.

Most original equipment manufacturing purge valve solenoids cost around $100-$150 and sometimes close to $200. This rate gets you a branded purge valve of the same make and model as was originally installed in the vehicle.

Alternatively, you can choose an aftermarket part. These include made-to-fit (made for a specific vehicle) and universal (made to fit as many vehicles as possible) valves.

Both have pros and cons. However, a universal purge valve starts at around $6-15, and a made-to-fit part normally costs from about $25. Therefore, you can save a significant amount of money on your replacement by choosing non-OEM.

There are pros and cons, and you might want to consider them before making the choice. E.g., an OEM part might have a better guarantee and ensures that the part works well in your engine.

In most cases, you’re looking at 20-60 minutes of labor to replace a purge canister valve. Here, your mechanic’s rate can be a significant factor in costs.

For example, if you go to a major chain like Valvoline or Midas, they will charge a flat rate or an hour of work plus a shop fee. In that case, you’ll usually pay for about an hour of work.

Other shops have a minimum of an hour of work in order to make the job worthwhile. Others will charge you for exact the time spent, which means you’ll pay much less for the total job.

Here, actual hourly rates also vary significantly. On average, you can expect to pay about $60 per hour. However, larger chains usually charge around $100.

And, on a national scale, that rate ranges from about $15 to above $205. So, the total amount you pay can vary significantly.

How Common is Your Car

If you have a less common car, you might have to pay more for your solenoid.

In addition, if you have a car that’s older than about 20 years, you’ll likely have a pressure valve instead of a solenoid. Both can significantly change the cost of labor and the cost of the part.

If your purge valve is going out, you’ll likely notice quickly. However, the symptoms of a bad purge valve can be difficult to tell from other issues with the fuel injection system.

Therefore, you’ll likely either want to go in for a diagnostic or check the purge valve manually with a multimeter and a pressure valve. In either case, this is a lot easier to do at a mechanic, because they have the tools to do so.

However, the following 5 symptoms are a good indication that your purge solenoid might be having issues.

If your vehicle is rough idling or even running rough, it could be because of EVP or Evaporative Emission System failing.

In this case, if the fuel vapor purge valve is failing, those vapors would build up, your fuel efficiency would go down, you might have gasses in your normal fuel mixture, and you might have too much pressure in the full system.

Eventually, this could even cause a vacuum leak, resulting in further issues.

Rough idling usually sounds like your engine surging and dropping in power, which is exactly what’s happening. Your vehicle gets an intermittent fuel mixture or a fuel mixture an over-pressurized fuel mixture.

Eventually, that causes major issues and it can damage other parts of the fuel injection system.

If your fuel is over-pressurized or contains too much fuel vapor or not enough, your vehicle might have trouble starting.

A rough start can be indicative of any number of issues including starter, solenoid, fuel injection, fuel line, fuel pump, etc.

However, it’s also a good sign that your fuel vapor vent is either stuck open or closed. You can check this, although it’s not usually done manually.

In addition, a bad vapor canister purge valve can cause a vacuum leak, which will mean more air gets into the cylinder chamber. That will make starting your car very difficult, as the fuel/air mixture will be completely off.

If you’re failing emissions tests, it likely means that something is wrong with the EVP system, with the catalytic converter, or with the filters.

In this case, your purge valve is responsible for directing fuel vapor back to the engine to be burned off.

If it doesn’t, it could enter the tailpipe and cause toxic levels of emissions. If that’s the case, simply replacing the valve should solve the issue.

A bad purge valve will normally result in a significant loss in fuel efficiency.

This happens because extra air enters the engine, because the system is under too much pressure, because there’s not enough pressure if the valve is stuck open, or even because the engine is getting a fuel mixture that contains a lot of vapor.

In any case, you’ll see shifts in vehicle acceleration, vehicle power, and in fuel consumption.

In most cases, you’ll use more fuel for less performance. Of course, this symptom can indicate a number of issues with the fuel system, therefore you’ll want to go in for a diagnostic test.

In any case, where a solenoid stops working, the check engine light should come on. Why? The purge valve is directly controlled by the onboard computer.

If it’s no longer responding, stuck open, or stuck closed, the computer should read an error and let you know. You’ll likely get an error code and you can take it in for a diagnostic.

However, it’s also possible that you might have a purge valve issue but the light doesn’t come on.

In this case, you might have a larger issue, such as the sensor being broken or damaged. At the same time, the computer should read any lack of input as a problem and let you know.

How To Replace A Purge Valve (6 Steps)

In most cases, the purge valve or purge solenoid is located on the top of the engine, on a line leading from the fuel intake to the purge canister. The canister itself might be under the engine.

However, in some cases, the valve is located under the vehicle, in a line leading from the canister up to the engine. In this case, it’s usually very close to or even directly above the fuel tank.

You can check your car’s manual or look online to see where yours is located. However, in most vehicles, it’s on top of the engine.

In most cases, you’ll need a screwdriver and a pair of gloves. However, if your valve is under your car, you’ll also need a jack and two jack stands.

Otherwise, you shouldn’t need any special tools to do the job. And, of course, you’ll want to have a spare purge valve on hand.

If you’re replacing the purge valve under your car, start by jacking up the vehicle. Use jack stands to block it.

From there, you can start your engine to test the car to see if the idling issues or other problems have smoothed out.

In almost every case, you should also double check that it isn’t leaking after idling for about 10 minutes.

Replacing a purge valve is relatively simple but if you still have questions, these answers should help.

Can I drive with a bad purge valve?

You can drive with a bad purge valve. However, it might be illegal if you’ve failed an emissions test. In addition, it will cost you extra gas and your engine will lose power.

Over time, driving with a bad purge valve can cause additional damage, meaning it costs more to repair.

What happens when a purge valve goes bad?

Depending on whether the valve is stuck open, closed, or simply responding badly, different things can happen.

For example, pressure can build up and cause a leak. Excess air can get into the fuel intake. Your vehicle’s cabin might smell like gas fumes. And you might be emitting toxic fumes from the tailpipe.

How long does a purge valve take to replace?

Usually, your mechanic can replace the purge valve in 20-60 minutes, start to finish.

On average, the total job is closer to 20 minutes.

Yes. If your EVP system stops working, your vehicle will smell like gas.

This is a good sign to get the full system checked.

Can a bad purge valve cause overheating?

If your bad valve causes a vacuum leak, you could end up with an overheating engine.

However, it’s unlikely and you’re more likely to see symptoms like losing power or rough idling instead.

If your purge valve is going out, it’s an easy fix.

In most cases, you can expect the total job to cost around $150 with labor.

However, that can range from $75 to $300 depending on the part, your mechanic’s rate, and your vehicle.