If your ignition coil is going out, your engine is likely losing power, using too much fuel, sputtering, or misfiring. Over time, this can result in damage to the engine, the spark plugs, and other parts of the engine.

In addition, if you have a waste spark ignition system, a failed coil means you won’t be able to drive at all. Therefore, you’ll have to replace your ignition coil and ASAP. 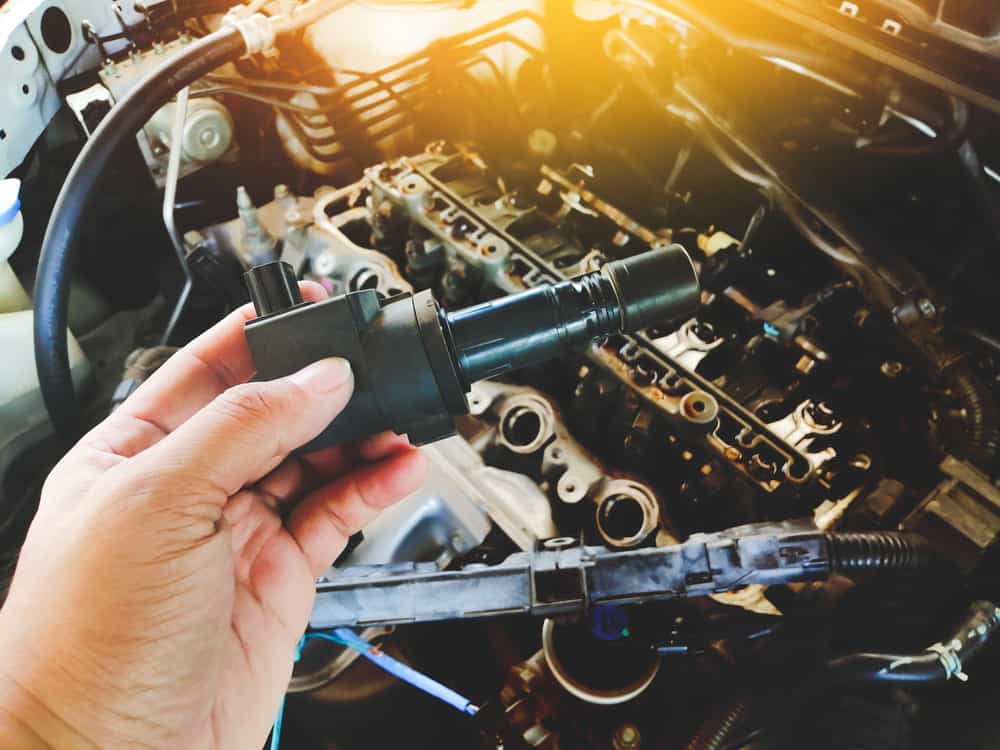 The average cost of replacing the ignition coil is $250. This includes about an hour of labor from your mechanic ($40-$100 on average) and $20-$250 for the ignition coils, of which you likely have one per spark plug/cylinder. In many cases, you’ll also have to replace other parts, so this might not be the full cost of the repair.

The table below shows a quick price comparison of ignition replacement cost estimates from reputable suppliers:

In most cases, the largest part of the cost of replacing an ignition coil pack is the cost of labor. That’s normally because it takes about an hour to replace your coils.

In some cases, it might take a bit longer. However, if you go to a mechanic, you’ll pay their minimum rate (usually about an hour of work) plus shop fees – which is usually $100 or more.

Or, if you have a vehicle older than about 25 years, you might have a single large ignition coil instead of a set.

The following chart details the cost estimate for replacing the performance coils in popular vehicles.

Replacing your ignition coils normally costs around $250. Here, the largest part of the cost is the pack of ignition coils if you replace them all (which you should) and the labor.

However, there are some factors which could influence the total cost of your repairs. These include the make and model of your car, the local cost of your mechanic, and factors like your car’s number of cylinders or the age of your vehicle.

The make and model of your vehicle influences the cost of replacing the ignition coils in a number of different ways. For example, your engine’s cylinders directly impact how many ignition coils you need in the engine.

Most engines have 1 spark plug per cylinder and one ignition coil per spark plug. However, some engines are exceptions to the rule.

For instance, if you have a Mercedes Benz M112 or M113, you have 2 spark plugs per cylinder but you still only have 1 ignition coil per cylinder.

This means that the majority of cars have 4 ignition coils. However, some have 6, 8, or even 12. You’ll have to check your engine.

The make and model of your car also affect costs in other ways. For example, performance cars normally use higher-end ignition coils.

These might be more efficient at transforming low voltage to high voltage. They might also be designed to function for longer periods.

There are four types of ignitions used in most vehicles. Most modern cars use coil-on-plug or conventional breaker-point ignitions. Each of these uses one ignition coil per cylinder.

On the other hand, you might have a waste-spark ignition, which uses one ignition coil per two cylinders. And, if you have a newer, lower emissions car, you’ll have an electronic ignition system, which offers more reliability.

Here, you’ll normally still have 1 ignition coil per cylinder. However, you’ll have a pickup coil and an electronic ignition control module instead of the breaker point.

This shouldn’t affect your replacement much, except you might have to take out more parts to replace the ignition coil – so the time to repair could be longer.

In most cases, mechanics charge between $15 and $205 per hour. On a national basis, you can expect an average of $60.

However, chain repair shops normally start at about $94.99 but that can be higher depending on your location.

Here, you can normally expect to pay about an hour of labor for most ignition coil replacement jobs.

In addition, you’ll pay a shop fee (5-20% of the bill) and any garage fees associated with leaving your car.

It’s important to note that you can often save money on the ignition coil by choosing remanufactured or made-to-fit parts rather than new and original equipment manufacture parts.

However, that’s not always advisable and your mechanic won’t always do the installation.

Here, any coils on the lower end of the price range in the chart above are usually made to fit – meaning that a competing company made them to fit this vehicle.

That might mean they’re lower quality or less ideal for your vehicle but it might also mean they’re made to higher standards. It really depends on what you buy.

5 Symptoms of a Bad Ignition Coil

If your ignition coils are going out, it’s unlikely you’ll be able to tell the symptoms from any other ignition or fuel distribution system error.

Therefore, it’s important to inspect the system and to get a diagnostics check if you’re not sure.

However, all symptoms should be easily noticeable, and your engine may even highlight a code for you to check, depending on how new the car is.

And, sometimes, it means too much air is getting into the system. That might mean the fuel injectors are bad or clogged, it might mean the engine timing is off, but often it means the ignition system isn’t working properly.

Here, you’ll want to go in for a diagnostics check, because it can be difficult to specifically isolate issues with the inanition system.

If you’re having a hard start, it could be because the ignition coils are going out. That’s especially true if you have a very old engine with just one coil.

However, if at any point your ignition cranks but the engine doesn’t turn over, you’re looking at a starter motor, starter, ignition switch, ignition coil, battery, or other starter system issue.

Therefore, you should always run a diagnostic check if you’re facing this issue.

If your ignition coils start to go bad over time, you’ll usually notice a drop in fuel efficiency.

This normally happens because the vehicle needs more power to produce the same effects, so it uses more fuel. That’s unlikely to be easily noticeable, especially at first.

However, if you do notice fuel usage going up, it’s always a good idea to check the fuel injection system, the exhaust system, and the ignition system – because all three play a strong role in how much fuel you end up using.

Similarly, if your ignition coils are failing, you’ll notice that you’re getting less power than usual.

This normally starts to coincide with your engine running roughly, sputters, jerking, and even stalling. It means your engine isn’t getting enough power.

While that can relate to many parts of the engine, including a bad battery, cables, spark plugs, etc., it’s important to run a diagnostics to check for issues.

If your engine is backfiring, it can mean that you have issues with the air/fuel mixture entering the engine. That’s very likely to be a power issue.

However, like with misfiring, it can also be about the engine timing, the spark plugs, the cylinders, and other issues. Therefore, you’ll still want a diagnostics check.

However, the steps to change your ignition coils will somewhat depend on your engine’s layout and design.

For example, if you have a waste spark ignition system, the ignition coils screw down onto the top of the spark plugs, with no system in between.

To change those, you’d simply pop off the valve cover and use a wrench to take off the ignition coils.

This guide assumes you have a standard breaker point or electric ignition system, with one ignition coil per cylinder.

If you have an older car with a single ignition coil, you’ll normally find it under the engine or inside the distributor cap.

Before you get started, you’ll want to park your car on a flat and level space. You’ll also want to turn the engine off and take the key out of the ignition.

Most modern cars lock the doors and windows when power cuts, you’ll need these to regain entry to your car. Then, open the hood to your car and disconnect the battery from the negative post.

Tuck that up out of the way so it doesn’t touch the battery. This prevents you from accidentally shocking yourself or shorting out the engine while replacing parts.

From there, you can replace your battery and test the engine.

If you still have questions about replacing your ignition coils, these answers should help.

Can I drive with bad ignition coils?

It’s usually a bad idea to drive with bad ignition coils. In addition, if you have a waste spark system, you literally cannot.

In most cases, bad ignition coils will result in engine misfiring, low power to the engine, and increased fuel usage.

Should I replace all ignition coils at once?

Yes. While it’s not entirely necessary, the factors that cause one to go bad usually result in the others going bad at around the same time.

Even added load from a single failed ignition coil can result in the others going out prematurely. There is a reason why ignition coils are normally sold in packs.

How long does it take to replace ignition coil?

In most cases, you can replace the full set of ignition coils in about an hour.

If there are complications or your engine has a lot of parts on top of the valve cover (this is unlikely), you might spend 2 hours on it.

Replacing ignition coils on your vehicle normally takes about an hour and will cost you anywhere from $150-$300 at most mechanics.

Depending on your car and whether you do the work yourself, that could drop down to as little as $17 or as much as $500.