How Much Does a Snow Blower Cost?

When buying a snow blower you have the choice of several types from numerous brands. Knowing the right price for the type of blower you need is crucial to avoid overpaying or underpaying for a model that can’t complete the jobs you need. In this guide we discuss the average cost of a snow blower across different types and brands.

Our bot found the average price for a snow blower is nearly $400. As you start your search for a blower, you should be prepared to spend at least several hundred dollars. The price goes up or down however dependent on the types of jobs you are planning to run. It all comes down to an honest assessment of what you need a snow blower for.

For those who live in the lower northeast, parts of the pacific northwest and California, snowfall is common in the winter, but rarely does it dump more than a few inches. Perhaps once or twice a winter will there be a storm that drops more than 8 inches of snow. If you live in one of those regions, you will want to consider a smaller, perhaps even electric powered, snowblower that is going to fall underneath that $400 average price tag.

On the other hand, if you live in the midwest, New England or mountain west, you should face the reality that you are going to need a heavier duty, most likely gas powered, machine to do the job. If you want a blower that can do it all, prepare to spend more than $600. If you want a heavy duty blower without the bells and whistles, you should expect to spend between $400 and $600.

Average Cost of Snowblowers by Brand

We found the priciest snowblower brand to be Briggs and Stratton while the cheapest being Greenworks. Greenworks blowers tend to be cheaper because many of their models are electric, which are less powerful and cheaper than gas models. Conversely, the majority of Briggs and Stanton models are gas powered.

Average Cost of a Snowblower by Type

There are several ways of classifying snowblowers. There is by the type of fuel they operate on, and there is also by how they function. By fuel type there are two subtypes, electric and gas powered.

Gas snow blowers we found were 20% more expensive on average than electric snow blowers. This makes sense though because gas powered snow blowers tend to be larger and more powerful. If you live in an area that gets more than 4 inches of snow on a regular basis, we would recommend you go with the more expensive gas powered blowers. They will be able to power through the thick snow and save you a considerable amount of time. If you go with a smaller electric model against 6 to 10 inches of snow, you’re going to be fighting an uphill battle. 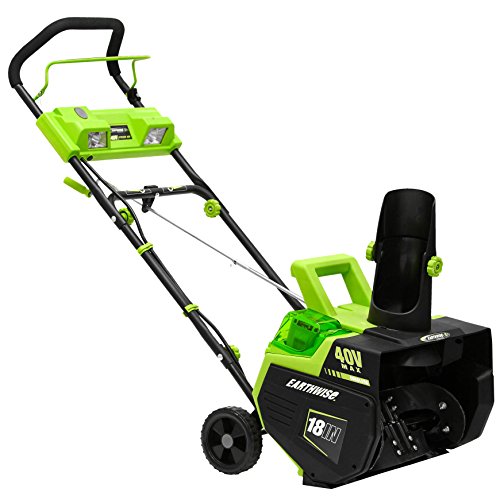 We recommend if you only have a sidewalk, walkway or other small area to plow, you go with a one stage blower. If you get over 4 inches but less than 8 usually, then go with a gas powered one stage. If you need to plow something larger like a driveway or go up slopes and also get heavy snows, then a two stage gas powered snow blower is the one for you.

While writing this article we came across some snowblowers we particularly liked. If we were shopping for a snowblower these are the ones we’d go with.