Why Are Graphics Cards So Expensive? [13 Reasons]

Shopping for a new graphics card can be daunting, regardless of the brand you prefer. 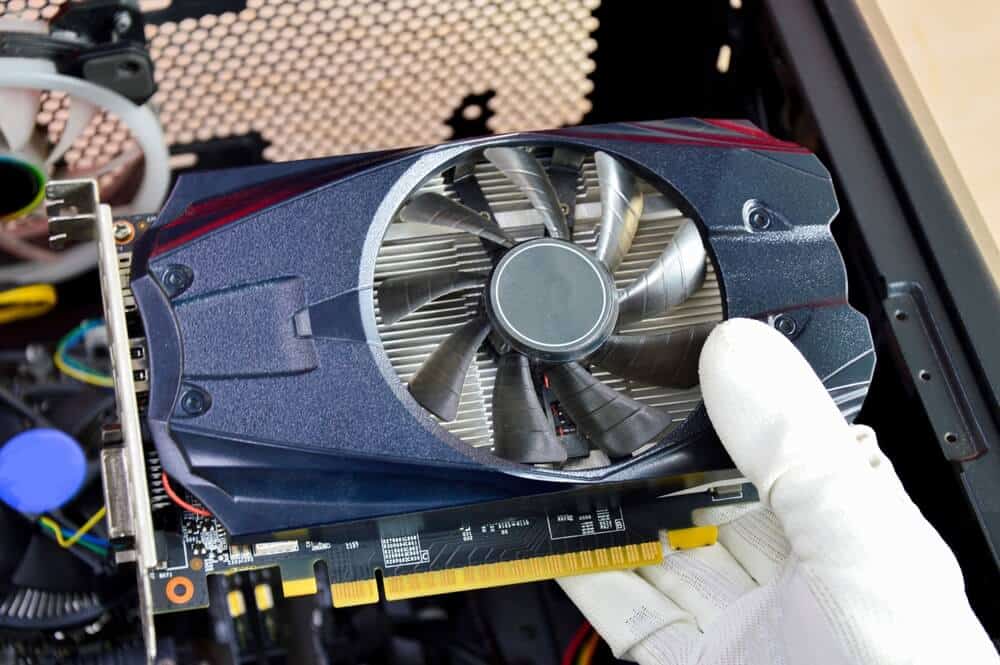 Graphics cards are expensive due to the improvement in performance and specs they provide. The advent of new technologies, such as blockchains and crypto mining, increased the demand. Geopolitical and health crises worldwide have disrupted the supply chains and boosted inflation, with consequences on production costs. Import tariffs, shipping costs, and increased spending on goods also influence retailer prices.

13 Reasons Why Graphics Cards Are Expensive

Getting your hands on a good GPU in today’s market means spending well over half a grand at the very least. Flagship graphics cards often cost thousands of dollars.

Here are the main reasons why you have to shell out exorbitant sums to buy a graphics card.

Numerous manufacturers of computer systems or parts, including ASUS, Apple, and MSI, make graphics cards. Yet, the GPU market is largely divided between three contenders: Intel, Nvidia, and AMD.

Not only is the market shared between three major companies, but Intel mostly manufactures onboard GPUs which are built-in on motherboards.

Moreover, the unparalleled specs and performance Nvidia provide drive the competition even lower. Even though AMD has made noteworthy GPUs over the years, they have hardly been a match for Nvidia’s flagship products.

Other top manufacturers follow the trend, which is why graphics cards are expensive.

2. Influence Of Brands And Branding

Holding the performance crown comes with perks, and the top GPU manufacturers know that. Nvidia above all, but also AMD and Intel, are heavy-weight names in the GPU industry.

The brand name is a guarantee for performance and quality. Resonating with consumers and building a base of loyal fans is key to successful branding.

Branding that ultimately helps sell the products at a higher price simply because someone is always willing to buy them.

3. Improvements In Performance And Specs

Unless you’ve been living under a rock, you likely witnessed the technological progress of the past few decades. We’ve come a long way from the first computers and graphics cards.

Gamers and tech professionals have higher expectations and demands from the products they buy, and manufacturers must invest in research and new product design to meet those expectations.

For instance, new GPUs can break the barriers between reality and virtually-generated graphics. Most brands invest in higher overall performance but also in added durability.

Developing better products that last significantly longer than their predecessors comes at a cost. And this cost is reflected in the increased costs of the graphics card.

A report released in May 2022 by Jon Peddie Research fueled gaming enthusiasts with hope. According to it, the demand for graphics cards dropped in the first quarter of the year, and prices were expected to normalize.

However, the temporary decrease in demand was likely a result of the geopolitical crisis due to the war in Ukraine. In reality, the demand for GPUs is higher than ever and financial experts expect the industry to grow by $105.70 billion by 2026.

High demand is generally accompanied by fast sales and a shortage in supply, so manufacturers drive prices up.

That said, you can be lucky to find high-end graphics cards at competitive prices.

For instance, in August 2022, Jensen Huang confirmed that Nvidia has built too many of their RTX 30 Series GPUs which were subsequently sold well below the initial market price as the company prepared for the launch of the RTX 40 Series.

Nevertheless, supply and demand is one of the reasons graphics cards are expensive.

Other factors that determine GPUs’ high pricing are the crises triggered by global health and geopolitical concerns.

Negative global events caused a change in behavior, with more and more people switching to remote working from home.

Developers, designers, professional gamers, and other tech professionals normally working on-site found themselves in the sudden need of investing in high-end equipment fast.

These events further increased the already high demand, so manufacturers felt justified in charging exorbitant prices for their equipment.

Linked to the same crises, another factor that negatively impacts GPU prices is inflation.

We talked about supply and demand, but the high demand for graphics cards is not the only reason for a supply shortage. In fact, the main culprits are the global crises.

The global chip shortage was kickstarted by the virus outbreak in 2020. Labor challenges and geopolitical uncertainties fueled this shortage further in the past years, leading to an extremely disrupted global chain supply.

Not only that, but semiconductor chips are used in a variety of industries ranging from computers to aviation.

The global chip shortage affected numerous markets and saw a delay in the launch of expected tech products, such as mobile phones, video game consoles, and GPUs, among others.

Every new batch that became available was snapped up pretty fast, further contributing to increasing the supply/demand gap and the already expensive GPU prices.

Most countries around the globe charge customs duties and fees on imported goods. Typically referred to as import tariffs, these fees are accounted for by manufacturers and resellers when establishing the final price of goods.

Most GPUs are manufactured in China and then imported to western countries. In the US, the import tariff on goods from China is 25%.

GPUs were exempt from this tax in 2022, but the import duty on graphics cards may be reimposed. If and when this happens, the high GPU prices are expected to rise even more.

Whether or not GPUs will remain exempt from import duty, manufacturers still have to ship the graphics cards from their production facilities to the rest of the world.

Sea freight from China to the US can cost thousands of dollars per container. These costs are worked out into and increase the final price of the graphics card.

Supply shortages and an increase in demand due to remote working are not the only reasons why GPUs are so expensive.

A seemingly unrelated technology has affected computer and computer part prices in more ways than one.

Majorly linked to the financial industry and the concept of cryptocurrencies, blockchains are decentralized, distributed, and public ledgers used to record transactions across a network of computers.

Each transaction is recorded in such a way that the records cannot be altered retroactively.

Moreover, these distributed networks have also started to offer users computing power through “virtual supercomputers.” This led to a rise in demand for GPU-as-a-service and computing-as-a-service products that require high-performing components.

Nvidia is one of the companies that have started to respond to the demand and deliver solutions. Naturally, at a premium.

Related to the blockchains, cryptocurrency mining is one of the trends that contributed to a boom in GPU demand and GPU price rising.

Mining is the process of creating new coins of any given cryptocurrency.

To mine new tokens, developers use computers that compete to solve a difficult and arbitrary puzzle. A new token is formed when the puzzle is solved, then the process starts again.

Two of the prerequisites of successful crypto mining are speed and high capacity for performing mathematical computations.

GPUs are much faster than CPUs in this aspect, and they are also capable of performing more calculations. Hence, graphics cards have been historically used in crypto mining.

Unsurprisingly, the two main companies that produce GPUs used for mining are Nvidia and AMD.

Scalping is another term related to the financial and investment industry that affects graphics card prices.

Traditionally, scalpers are traders specialized in buying and selling securities fast, usually within seconds, with the aim of achieving profits from minuscule price changes.

In the computing world, scalpers are individuals or companies that can afford to buy and hoard stocks of goods, then resell them at insane prices.

Scalpers typically use bots to purchase GPUs immediately after release and then put them back on the market after adding a premium.

While scalping is bad news for end consumers due to more expensive graphics card prices, the practice is legal in most countries and it is estimated that more than $61 million worth of graphics cards has been resold on the secondary market in 2022 alone.

A lesser-known factor that can affect GPU prices is the enforced bundling or offering of “freebies” with a new graphics card.

For instance, you may be offered a 1-year subscription to a gaming platform or given a free video game with your new GeForce.

AMD is notorious for its Radeon graphics and Ryzen processor bundles that allegedly enable you to buy both products at a discount.

In reality, all those gifts and discounts are already accounted for by manufacturers and worked into the higher retail prices of their graphics cards.

Historically, crises and inflation had a negative effect on consumer spending. However, statistics show this isn’t the case anymore.

According to the World Economic Forum, US consumers are spending more despite rising inflation.

People who are willing to spend represent one of the main reasons manufacturers and retailers increase prices, and things are no different when it comes to GPUs.

They cost so much because enthusiasts are willing to spend their money on them.

Will GPU Prices Ever Go Down?

GPU prices have been known to fluctuate in the past years, with some even claiming they were beginning to drop.

Despite a temporary downward trend, it seems that graphics cards aren’t going to get cheaper anytime soon.

The one to confirm this claim is none other than Nvidia’s CEO. According to Huang, the idea that a chip is going to go down in cost over time is one of the past.

Increased performance and rising costs of components are the main reasons why GPU prices won’t go back to what they were.

While newly released graphics cards from Nvidia and AMD aren’t expected to become cheaper in the future, you can still find good deals on the used market or expect prices to somewhat drop naturally before the release of a new model.

Is It Worth Buying Graphics Cards Right Now?

If you’re looking for a cheaper GPU deal, the best time to buy is during seasonal discounts or right after the release of a new model, when the remaining products from the old series are generally discounted.

Global crises, imbalances between demand and supply, the development of new technologies, new professions, and new working trends are some of the factors that affect GPU costs.

While graphics cards are expensive, their prices are not expected to go back to what they were. The only way to get a good deal is hunting for discounts or exploring the idea of a second-hand graphics card.