Cashews, also commonly called cashew nuts, continue to grow in popularity around the world. They are often eaten as snacks or added into protein-rich menus.

The highly nutritious cashews are also widely used in South Asian cooking, and they can be turned into cashew milk, cheese, and butter. 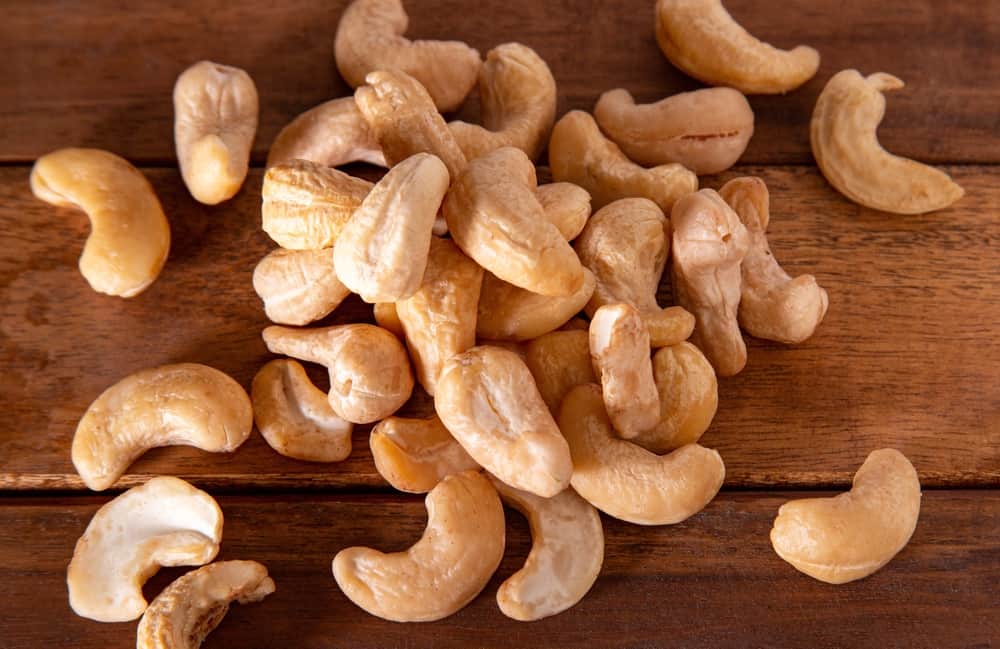 Cashews are expensive because demand is high as a result of their versatility and nutritional value. They require careful processing because the shell contains toxins. The processing work is intensive and often done using manual labor. Cashews only grow in tropical climates and are vulnerable to weather. Export costs also drive up their final price.

Let’s examine in more detail some of the reasons why cashews are so expensive.

Cashew trees, which are native to north east Brazil and south east Venezuela, are a member of the poison ivy family. The plant contains toxic oils which can cause blisters, burns, and itches.

The shell of the cashew nut contains a chemical compound known as anacardic acid.

Unprocessed cashews are dangerous to touch or eat and each shell must be split open manually to remove the seed.

The nuts also release dangerous toxins during the roasting. Then the outer husk, which is high in tannins, must be removed. The whole process is labor-intensive and has to be done very carefully.

The toxins can also degrade the equipment used in the production process, so it has to be replaced regularly.

2. Each Nut Is Harvested By Hand

Although some elements of the cashew production process are automated, much of the work is still done manually.

Harvesting and peeling off the outer skin or husk requires highly skilled work. Experienced workers can process an average of 5.5 lbs of cashews per shift. After this process, the nuts are graded and sorted.

In most places, splitting open each shelled nut, or drupe, is still done by hand. Producers are keen to ensure that the nuts, which are brittle, do not get broken in the process.

3. Cashews Can Only Be Harvested Once A Year

Cashew trees only produce fruits – and, therefore, nuts – in the dry season.

There is only one harvest of the trees per year, unlike other produce like coconuts which can be harvested every month. This factor drives up cashew’s costs.

4. Cashews Are Vulnerable To Weather

Cashew harvests can be severely impacted by weather. These trees like sun and prefer to be in a temperature range of 75.2 to 82.4°F, and have low tolerance to shade.

Heavy rain or high temperatures during the flowering and fruiting phase can damage the plants. Cloudy weather can lead to tea mosquito infestation.

Sri Lanka’s harvest dropped by 40 percent in 2021 because of heavy rainfall and strong winds. The delicate flowers were destroyed by the wind and rain and the drupes also fell from the trees.

5. Cashews Only Grow In Tropical Climates

Countries without tropical climates have to import cashew nuts. This keeps demand high – and, therefore, the price.

India is the biggest consumer of cashews, followed by the United States, Germany, Netherlands, United Arab Emirates and the United Kingdom.

6. Cashews Are Often Exported For Processing

A large proportion of the world’s cashews are grown in Africa – particularly the Ivory Coast. It is estimated that around 43 percent of the global cashew nut supply comes from Africa.

However, only around ten percent of Africa’s cashew crop is processed domestically. Ninety percent of the crop is shipped to India or Vietnam for processing.

Vietnam is the largest exporter of cashews in the world, having invested in automated processing technology. Because of their near-monopoly, they are able to control global prices.

India is also a major processor of cashews but the work there is still largely done manually.

When they are growing, cashews are at risk of being damaged by pests. The most dangerous is the stem and root borer which can lead to the death of trees.

Other pests include tea mosquitos, thrips, mealy bugs and leaf miners. Even after harvesting, the cashews are at risk of being destroyed by these bugs. Unless processing is undertaken with great cleanliness, butterflies can lay eggs on the cashew nuts.

The kernels can also attract mice. The pests damage the crop and degrade it – which either makes it less valuable or it needs to be destroyed completely. This reduces the supply of cashews and drives prices up.

8. Demand For Cashews Is Rising

They are high in ‘healthy fats’ including monounsaturated and polyunsaturated fats, low in sugar and rich in fiber.

The nuts are an increasingly popular snack all across the world. They are also used to produce cashew milk and butter which make a good alternative to dairy products.

As a result of their nutritional value they often feature in the diets of vegetarians and vegans. Cashews are also widely used in South Asian cooking.

Due to the high demand, analysts predict that the cashew market will grow to $7 billion by 2025.

The high demand for cashews, thanks to their versatility and nutritional content, keeps the price high. Cashews contain toxins which are harmful which means they require careful processing.

Much of the processing is done by hand and is very labor intensive. Cashews grow in tropical climates and the harvest can be affected by bad weather.