Depending on the service area, these tanks can range from a simple few thousand gallons to several millions of gallons. And, they’re used across the United States by everyone, from personal homes to cities to military sites. 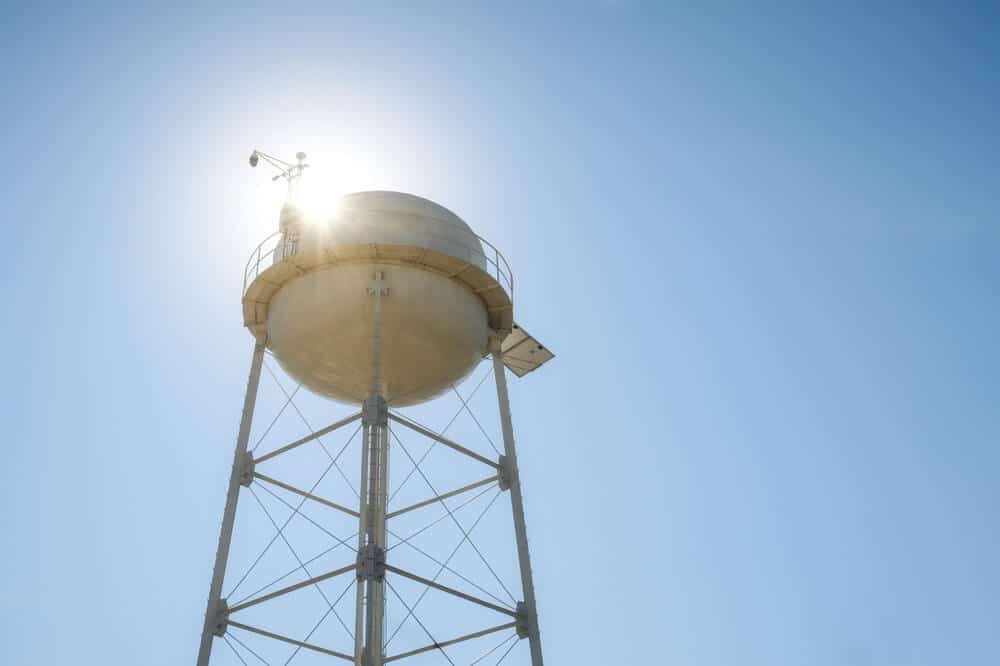 While a city water tower will cost anywhere from $300,000 to $8 million or more to build, you probably want a smaller one. The cost to build a private water tower usually ranges between $10,000 and $500,000. However, for very small tanks on steel systems, you could bring costs even lower.

*Disclaimer: This research was correct as of November 2022. Our sources are linked to throughout this article.

There are dozens of different types of water towers. In most cases, costs depend on materials, size, and location.

For example, a composite water tower is normally the most cost-effective choice. However, a plastic or metal tank on steel supports will be more cost-effective for small towers.

For example, the following chart outlines costs for a 200,000-gallon water tower in the “composite” style. This chart does not include the cost of land or plumbing.

Here, it’s also important to keep in mind that most water towers are made up of reinforced concrete. 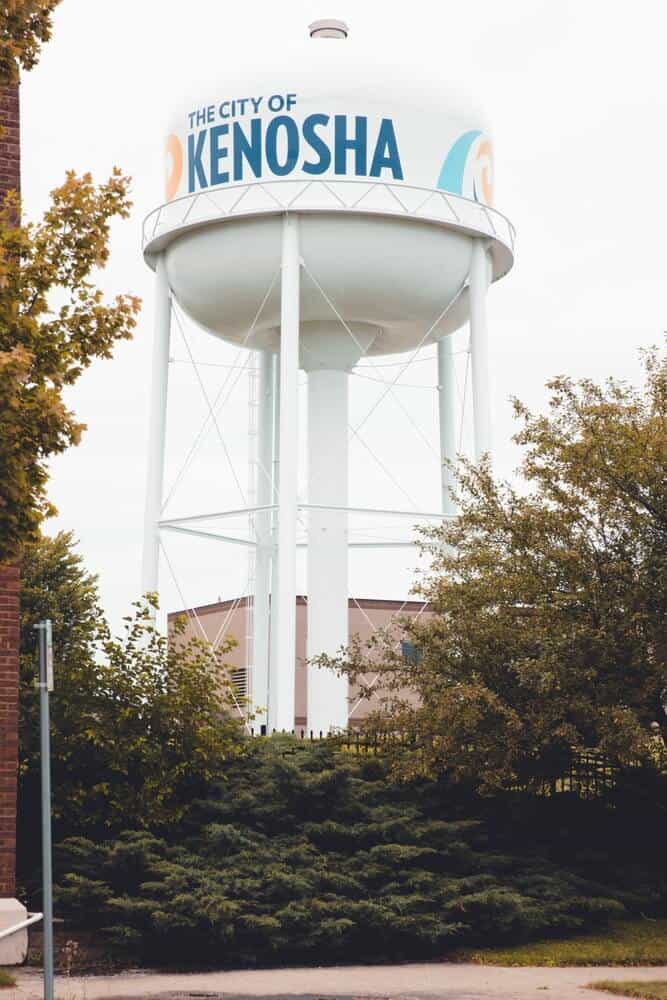 The cost of building a water tower will heavily depend on design, size, location, land costs, and local permits.

Similarly, labor costs average at around $18-$22 per hour across the U.S. However, in union areas like New York City, that goes up to $94 per hour.

In addition, land costs will impact pricing quite a bit.

Chances are, if you’re building a water tower, you intend to do it on existing and private property. Therefore, you shouldn’t have to lease or buy land.

However, if you’re pricing out a city project, land could exceed $200,000 in costs depending on where you’re at. On a national level, though, you should expect to pay about $24 per square foot of land.

Almost all water towers are built in one of four styles; composite, spheroid, fluted column, and multi-legged.

However, the basic principle and associated costs remain the same.

Here, designs will impact the materials needed. For example, composite and pedestal towers are material intensive during the buildup, because they rely on a large base and foundation for stability.

However, only the tank part of the tower is made of steel, which means you could significantly reduce long-term maintenance costs.

Ellipsoidal and multi-pillar towers are cheaper to build. These may have fully steel or concrete and steel construction.

In addition, they may be sold as prefabricated units, which you can weld together on-site in a few days. This will greatly impact costs.

In any case where you put together a non-pre-fabricated water tower, you’ll have to involve an architect.

In addition, you’ll always want to involve engineers in your project. This ensures that your tower is stable, built to withstand local wind, and is stable based on ground composition.

This may mean taking extra precautions with the foundation.

For example, a 50,000-gallon tank is likely about 25 feet in diameter. The base will range from about 8 feet to about 30 feet depending on the construction type.

That means your foundation will have to support over 850 pounds of weight per square foot of foundation – before you factor in the weight of the tower itself.

This will mean working out the best tensile and compressive strength for the concrete you need, based on the tower you’re building.

You’ll likely need to use reinforced ultra-high-performance concrete, which can cost up to $30 per square foot.

Engineers earn an average of $35 per hour in the U.S. Often, you can also pay close to 2.5% of the total project fee as well.

However, you’ll need site inspections, building inspections, and ongoing construction inspections to ensure your tower meets standards for safety as you go.

Running water lines from a water tower to the delivery points or to the main water line can be extremely expensive. Depending on the size of your water tower, plumbing the tower may cost anywhere from a few thousand to over $1 million.

Here, you’re normally paying between $1.40 and $10 per linear foot of pipe laid. You’ll almost always expect to pay higher rates in this case.

That’s because you’ll have to dig pipes under the frost line to keep them secure over the winter.

That piping will include digging over 400 feet of trench, laying the pipe, and then running the pipe up the water tower. In this case, you could expect costs to be around $4,500 for the total project, before tax.

Building a water tower can be an extremely complicated process. Depending on height and water capacity, you might have to get several permits.

In addition, most permits start out at around 0.15-$1 per square foot of covered or insulated/heated space. Most also have a minimum cost of $200.

You’ll also need a planning permit. This ensures that the city can inspect your building permits and ensure that your building is safe for you and the people around you.

Depending on the city, this may be part of the building permit. If it’s not, rates normally start at $35-$50 but can go into the thousands in the center of an urban environment.

In addition, many cities and counties require a special permit for water storage of over 5,000 gallons.

In other cases, counties will conditionally require that you get a permit based on the intended use. For example, if you’re using the water for drinking water, it’s much more likely that you need a permit and city planning inspection.

Most water towers are made of steel and concrete. This normally includes a reinforced concrete foundation, steel or concrete base, and a steel tank.

In some cases, you may also have a concrete outer layer on the steel tank.

You can also expect to pay around $400 and $1,800 per ton for steel. That works out to a market average of $1,200. At about 2.2 pounds of steel per square foot of concrete foundation or base, that cost adds up quickly.

On the other hand, if you’re having the water tower prefabricated, so it goes together quickly on-site, you can expect those prices to go up to $3,000-$3,600 per ton of steel.

How much steel is in a water tower? That depends on a lot of factors.

For example, a 179-foot tall water tower holding 1 million gallons of water in Alberta, Canada used just under 460 tons of steel in the foundation, base, and tower.

At current market rates, that’s roughly $1.38 million in steel costs alone, as much of the tower was prefabricated.

City or municipality water towers will include a multi-factor pumping system.

These include a well pump to move water from the well or water supply to the water treatment area. Then, a high-lift pump will take the water up into the feeder pipes and into the water tower.

For residential use, you’ll have to lift water much less high. Often, that will mean you can get away with spending $2,000-$10,000 on a pump system.

You may also be able to have a single pump from well to tank, especially if you’re not using it for drinking water.

Your foundation has to be able to support a significant amount of weight. That often means choosing high PSI or high-density concrete.

You’ll also have to reinforce it with wire mesh. And, in many cases, you’ll need steel piles to distribute the weight of the water tower across the concrete foundation.

What does that mean in terms of costs? Piles will normally cost around $180-$220 per yard, including driving them.

Normally, you can drive 4-10 piles per day. In addition, concrete can cost up to $24 per cubic yard.

If you lay a small foundation of 81 square feet, you’ll need one cubic yard of concrete per 4 inches of foundation thickness.

However, your foundation depth and type will significantly depend on local needs. For example, you might need piers, driven piles, soil improvement, or spread footings depending on what type of conditions you have.

Therefore, it’s always important to consult with local engineers when designing a tower and choosing a base. Local seismic or earthquake activity will require a completely different foundation than high winds.

Coating, painting, and finishing your water tower will always be an important part of the total cost. For example, some water tower projects spend hundreds of thousands on paint and coating alone.

Here, costs will heavily depend on the total size and material. For example, a composite tower will require less paint than a full steel tower, because you won’t normally paint concrete.

Water towers can range from a few thousand dollars to several million dollars. In most cases, these costs depend on size, construction, and materials.

In addition, the minimum costs are all based on pre-fabricated or segmented plate tanks, which can be purchased cheaply.

DIY Vs. Hiring A Pro

In almost every case, it will be difficult to properly install a water tower on your own.

In most, water tower installation will require heavy equipment, licensing to use that equipment, and significant engineering expertise.

For example, you’ll likely want a reinforced foundation with piles.

You’ll also likely need a crane to assemble the tower, even if you ground weld most of the pieces. And, you’ll need significant quantities of concrete mixed to a high density to ensure strength.

Therefore, it’s almost always a better idea to hire someone to build a water tower for you.

However, if you’re going for the cost-effective route of a prefabricated DIY water tower with a tank on a short (think no more than 50 feet) base, you can probably get away with doing the work yourself.

You’ll still have to properly do the foundation as well. Plus, you’ll still need a crane to get the tower upright and the tank on top.

If you still have questions about building a water tower, this FAQ should help.

How long can water be stored in a water tower?

In most cases, water isn’t stored in water towers. Instead, it’s pumped up and used throughout the day.

In most cases, water towers are designed to meet a single day of use for the serviced area. This means you’ll pump water up to keep the tank full throughout the day.

However, if you have a water tower with standing water, storage depends on several factors.

For example, if the tank is completely closed and you have a water filtration or purification element in your pumping system, you might be able to store it for up to 6 months.

If the tank isn’t closed, it could be contaminated with bacteria or algae in as little as a day.

What is the average diameter & height of a water tower?

Water towers are built based on desired water pressure.

Here, each foot of height provides roughly 0.43 pounds per square inch of pressure. For most city water towers in the United States, that works out to 50-100 PSI.

In most cases, the diameter is based on the service area. The tank must hold roughly a full day of water supply for the households using it.

Water tower height varies quite a bit across the United States and even inside cities. However, the “average” height is 120 feet. And, the average diameter is 50 feet. Of course, that’s for a city water supply.

If you’re looking at agricultural or farm water towers, heights are much closer to 50 feet, with diameters between 20 and 40 feet.

Water towers serve important functions for cities, industry, and for individuals who want to increase weather pressure from a well. At the same time, they are feats of engineering and can be extremely expensive to build. The cost of a sealed small water tower will start from $5,000 but will more likely cost $10,000-$35,000. On the other hand, city water towers average between $1.7 and $3.8 million.