Whether you want to replace a broken V8 engine or swap a V4 or V6 for a V8, you might wonder what impact such a purchase might have on your budget. 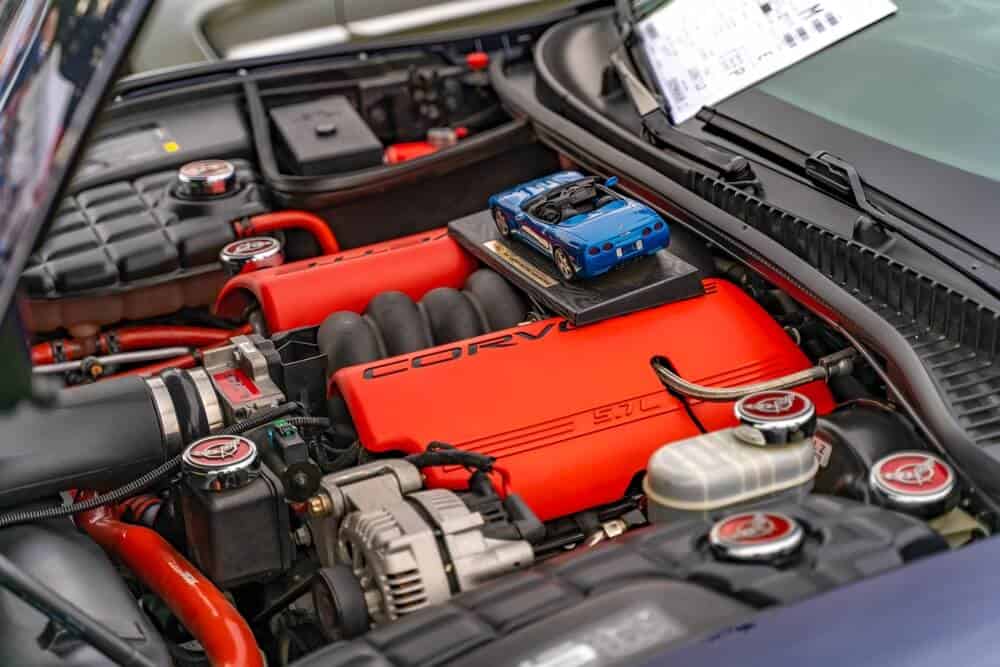 The average cost of V8 engines varies from $2,469 to $38,000. Prices are influenced by a variety of factors, including the type of engine, manufacturer, car make and model, and whether the engine is new, used, or remanufactured. Engine blocks are cheaper than full ones and a good choice if you can reuse parts of the old engine.

A V8 engine is an excellent option for car or truck owners who want to haul heavier loads or have a higher towing capacity. Typically, they also provide more horsepower and improve a vehicle’s performance.

The table below compares the average prices of V8 engines for popular makes and models*:

*Median price ranges in the table were calculated based on quotes from various dealerships and aftermarket prices for used or refurbished components. They are correct as of October 2022 and intended to use as reference only.

V8 engines can come cheap or cost more than $30,000, depending on the car they are manufactured for and whether they are used or new.

For instance, a new engine for a Chevrolet Camaro manufactured between 2017 and 2021 costs up to $10,440. The same engine type also equips Cadillac CTS vehicles manufactured from 2016 to 2019.

Because the same engine – Magnuson Superchargers CTS-V – equips various cars, it is relatively easy to find on the used market or salvage yards.

Prices aren’t that low compared to a new part, but you could save up to $1,515 by buying a used or remanufactured engine.

Another example is the Ford Mustang and Ford F-150. Both vehicles can run on the same engine, and they are similarly priced.

Dodge Charger and Challenger are both compatible with V8 engines of various capacities. All of them are Chrysler HEMI and prices vary from about $5,600 to $36,500 depending on the block type.

Joining the Camaro, Jeep Grand Cherokee Trackhawk has one of the most affordable engine options.

This SUV comes with a 707-horsepower supercharged Hellcat and is the most powerful Jeep ever built. Yet, a new engine will only set you back $23,000 on average.

However, the examples above only refer to common makes and models. A new V8 engine can cost a lot more, with prices exceeding $50,000 for luxury vehicles such as Ferrari, Jaguar, BMW, Mercedes-Benz, or Maserati. 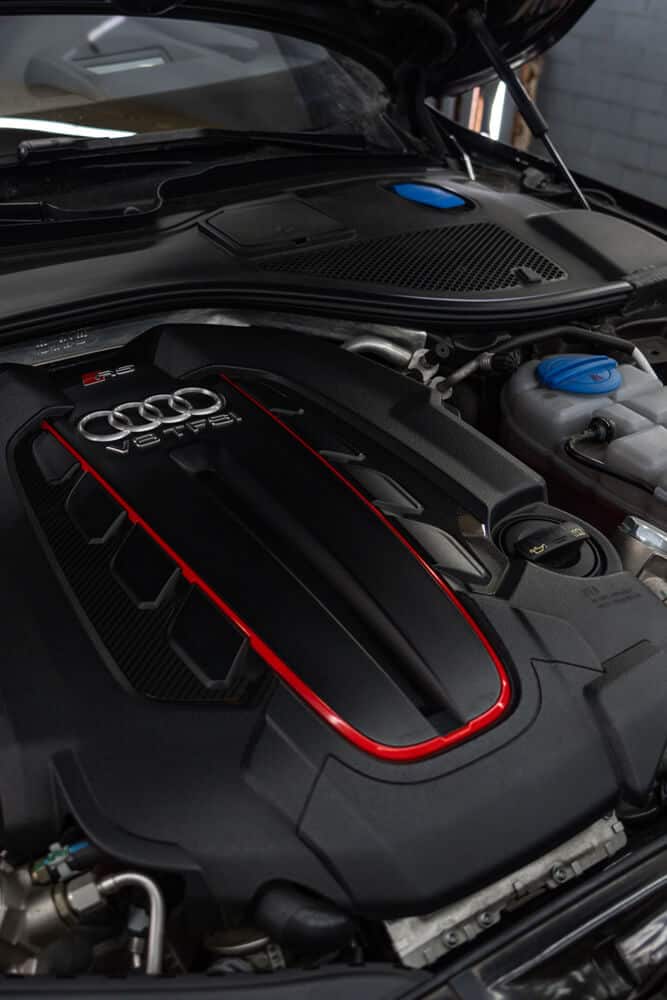 Replacing or swapping an engine is expensive, but you can make sure you’re getting the best deal by considering the various factors.

Finding a V8 engine that isn’t factory-boosted is rare, at least in modern makes and models. However, not all engines were created equal.

There are three main engine types to choose from.

Turbochargers, or turbo for short, have long been associated with motorsports and performance vehicles. However, they are extremely common nowadays.

Automakers from around the globe use turbochargers in their engines to boost the performance of the vehicles. They are found in European cars like Audi and BMW, but also in city and family cars like KIA, VW, or Ford Fusion.

Turbocharged engines have the ability to create more power on fewer cylinders. In V8 engines, turbochargers provide an additional power surge that makes them perfect for the speed-hungry type.

Technically, turbocharged engines are cheaper than their supercharged counterparts. However, those manufactured by European automakers often have higher price tags.

Turbochargers are further divided into twin-turbo (biturbo) and quad-turbo, which have two or four turbochargers, respectively. These are obviously more expensive than single-turbo engines.

Superchargers are another form of compressors that use a type of mechanical connection to the engine rather than exhaust gasses to boost performance.

These engines are much more common in American makes and models, including Ford Mustang Shelby and Chevrolet Camaro ZL1.

Supercharged engines have fewer components than turbocharged ones and are cheaper to repair. However, they are more expensive upfront. The boost is also fixed, since the charger is linked directly to the engine.

Twin-chargers are a sort of hybrid combining turbocharging and supercharging and providing the best of both worlds.

However, they are complicated and expensive to produce – in fact, they are the most expensive type of V8 engine.

Currently, only a handful of automakers utilize twin-charged engines as standard, including Volvo, Land Rover, and Jaguar.

Engine type aside, the engine specifications also influence the costs. The two most important specs to consider are the engine displacement and horsepower.

Engine displacement is the internal volume of the combustion engine measured in liters or cubic centimeters (cc).

An engine’s horsepower also determines a car’s performance. Typically, the more horsepower a car has, the more performant it is and the more expensive is the engine.

The table below compares the specs of various Dodge Charger V8 engines*:

*Data in the table was sourced from Dodge. New engine prices are available on request.

V8 engines from different automakers may be similar in performance, but the brand plays a crucial role in determining costs.

These parts range from around $5,500 to $20,000 on average, even though some models are equipped with more expensive engines.

The most expensive V8 engines come from luxury automakers like Lamborghini, Ferrari, and Bugatti, with prices often starting at $50,000+.

The car’s brand isn’t the only thing that determines the engine cost. You must also consider the vehicle’s model and year.

Typically, most brands use similar engines on their cars and trucks. For instance, you can find the same engines on Ford Mustang and Ford F-150.

Similarly, Dodge equips both the Charger and the Challenger with the same engines, and most automakers follow suit.

However, as technology evolves, car makers update the types of engines they use.

The Ford F-150, for instance, is an iconic pickup truck that has been around since 1975. Yet, its latest version has nothing in common with the one launched decades ago.

The V8 engine was introduced in this type of truck in 2011, but used or refurbished engines for those trucks are a lot cheaper than new V8s for the 2021 or 2022 version of the vehicle.

Another factor that influences a V8 engine cost is its age.

The table below shows a comparison between V8 engine prices based on their age*:

*Average price ranges in the table were calculated based on quotes from various dealerships and aftermarket prices for used or refurbished components. They are correct as of October 2022 and intended to use as reference only.

If your vehicle’s engine has died but you don’t want to throw away the car, a used engine can help get it fixed at a fraction of the price of new engines.

These V8s are available on the aftermarket or from salvage yards.

Their main advantage is the affordable price tag, with average costs ranging from $2,469 to $8,499 depending on the car’s make and model.

The main downside is the history. You don’t know how many miles the engine really has, or if it has any hidden troubles.

Salvage yards may or may not provide a warranty or accept returns for parts bought from them. Likewise, buying a used engine on Craigslist or eBay comes with risks.

Remanufactured – or refurbished – engines are available from dealerships. They are also used, but restored to new conditions.

These engines are more expensive than used ones, but cheaper than new ones. Dealerships or authorized mechanics also guarantee that they work like new engines, and offer warranties that can vary from one to five years.

These engines are only available from dealerships or ordered directly from the automaker. They are the most expensive but also the safest option.

New engines typically come with warranties of at least five years and cost between $5,597 and $38,000 on average.

Like most engines, V8 engines can be bought full or as blocks.

Short blocks are the most basic version, only comprising the rotating assembly and combustion chamber. They are the cheapest, with some in the lower range costing around $1,000.

Long blocks comprise everything in a short block but also additional parts like the timing gear, camshafts, lifters, valve train, and cylinder head.

Crate engines are complete, ready-to-install engines comprising everything in the long block plus additional parts. They are the most expensive, but you won’t have to worry about component compatibility when installing them.

How Much Is A V8 Engine Swap? 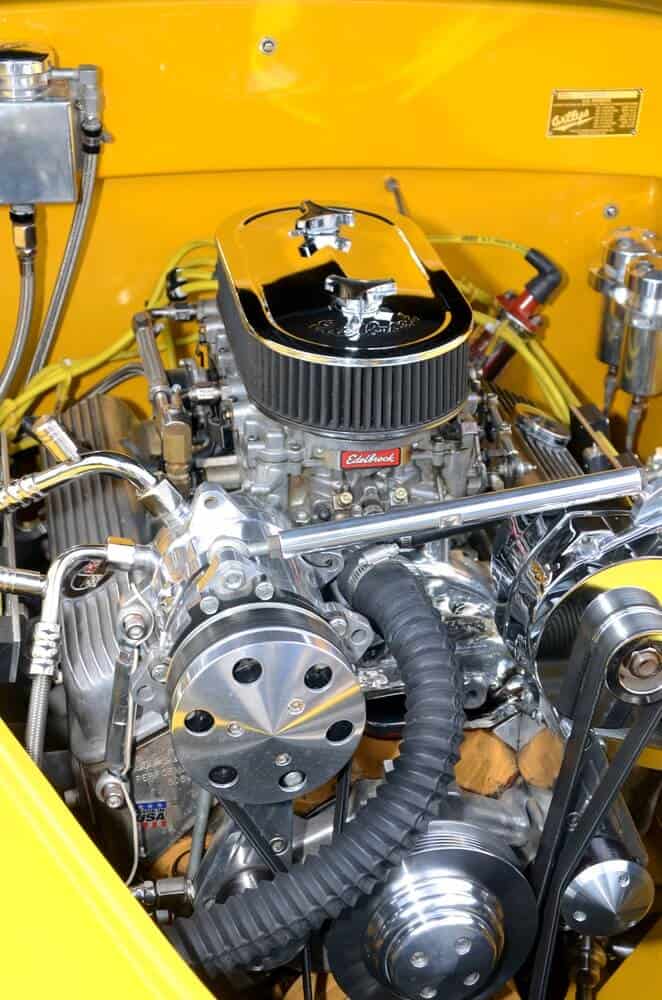 Engine swapping costs vary widely, depending on what type of engine you want to swap.

Technically, you can spend anywhere from $3846 to $40,250 for parts and labor, on average, depending on the car’s make and model and engine age.

Upgrading the car from a smaller engine to a V8 – such as swapping a V4 or V6 for a V8 – is much more expensive.

Labor time can double in this case, since the mechanic must make a lot of modifications.

V8 engine costs remain invariable, but you may be charged for additional repairs. Additional parts can also set you back up to $6,000 on top of all other costs.

Typically, you can expect to spend around $10,000 or more based on the work extensiveness and type of engine.

How much does it cost to replace a broken V8 engine?

Depending on damage extensiveness, you may need a short block or crate engine. Average prices for a V8 vary from $2,469 to $38,000.

Is a V8 engine worth it?

A V8 engine provides higher performance than a V4 or V6, but it has a poorer fuel economy and is generally more expensive to maintain. It is worth it if you need the extra power but you might be better off with a V6 otherwise.

Whether you need a like-for-like V8 engine replacement or want to upgrade your car, you can expect to pay between $2,469 and $38,000 for the engine alone, on average.

The type of V8 engine, car make and model, and engine age will all dictate how cheap or expensive the engine is.