The mass airflow sensor is a vital part of a car’s fuel injection system.

Its role is to determine the amount of air flowing through the engine, helping the computer calculate how much fuel to inject for the ideal air-to-fuel ratio.

Replacing a faulty mass airflow sensor promptly is crucial to prevent further damage to the engine.

The average cost of replacing the mass airflow sensor varies from $305 to $410, including parts and labor. A new mass airflow sensor typically costs between $149 and $540, depending on the vehicle’s make and model. Labor costs vary from $50 to $65 on average, but most mechanics charge more for imported European vehicles.

How Much Does Mass Airflow Sensor Replacement Cost?

The mass airflow sensor is a small device placed between the car’s air filter and the engine’s manifold.

Depending on the car, this sensor doesn’t present overly complicated engineering and is relatively cheap compared to other injection system parts.

*Average price ranges in the table were calculated based on quotes from various providers across the nation. They are correct as of October 2022 and intended to use as reference only. Actual prices can vary based on your vehicle’s make and model, location, labor time, and additional repairs required.

A new mass airflow (MAF) sensor for a city or family car costs around $100 to $250 on average. Used MAFs are available on the aftermarket for most brands, prices going as low as $15.

However, buying a secondhand sensor might not be the best idea.

While salvage yards may sell functional MAF sensors, there is no way to tell whether the part works until you put it in the car.

Most salvage yards don’t offer warranties or accept returns on these parts, and you may end up with a broken replacement.

Things change in the case of luxury vehicles.

New MAF sensors for European cars like Audi, Mercedes-Benz, or BMW are a lot more expensive. You could spend over $600 for the part alone. Labor is also more expensive for these cars.

Buying a used mass airflow sensor from an authorized dealership could help you save money.

Used parts bought directly from a dealership are typically guaranteed or can be returned in case of malfunctions.

Keep in mind that mass airflow sensors have a lifespan of about five to ten years’ despite being considered to last as long as your car. Used parts, even when bought from a dealership, are likely to break faster than new ones. 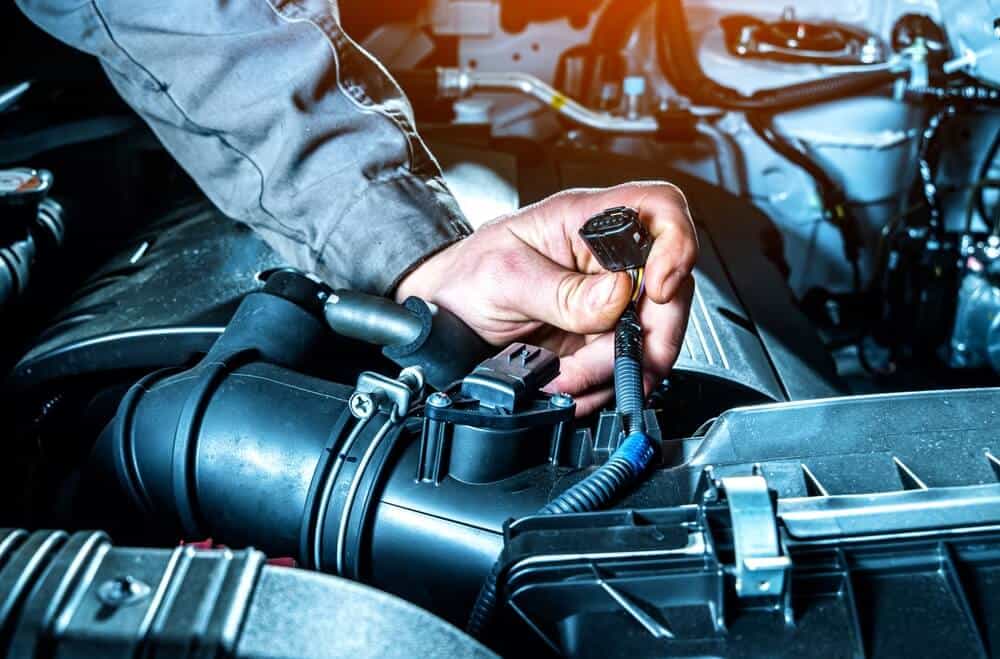 Replacing a MAF sensor costs between $305 and $410 on average, but you could spend a lot more.

The table below lists some of the main factors that influence MAF replacement prices*:

*Average costs in the table are industry averages correct as of October 2022 and intended to be used as reference only. Actual costs can vary based on a variety of other factors, such as location and whether you have the part replaced by an independent mechanic or dealership.

The car’s make and model is the main factor that influences the replacement costs of a mass airflow sensor.

Frugal vehicles, such as city or regular family cars that are common in the US (or locally manufactured), have the cheapest parts.

For instance, a new (and original) mass airflow sensor for Toyota Camry costs around $175 to $180. Replacing this part takes a skilled mechanic around half an hour.

Opting for a compatible part could lower the costs, though, which is how average prices for replacing a MAF on a Camry go from $195 to $250.

On the polar opposite are imported luxury vehicles. Some of the most expensive ones are German makes like BMW and Audi.

The part alone can cost over $440 for a BMW X3. Because European-made vehicles often require specialized servicing, you might have to take them to the dealership to replace the sensor.

Dealership mechanics are more expensive, and you could pay over $200 for labor alone.

Where you live also plays a role.

Mechanics charge between $90 and $150 per hour on average, but these rates are calculated considering rates across the USA.

Thus, you could pay less or a lot more depending on the actual rates in your area.

According to CarMD, Maine, Iowa, Wisconsin, Michigan, and Ohio are the five states with the lowest mechanic labor rates.

California, Connecticut, Georgia, Colorado, and the District of Columbia stand at the opposite end, with the highest car repair costs.

Labor rates aside, another factor that influences the MAF replacement cost is the labor time.

Mechanics typically need between 45 minutes and an hour to replace the mass airflow sensor. However, these are the average replacement times for common cars and average mechanics.

A skilled professional with experience in servicing your car make and model could replace the part in half an hour or less.

Likewise, a new mechanic or one that doesn’t have experience servicing a specific car model might take over an hour to remove the faulty sensor and install a new one.

Taking a luxury car to the dealership (or authorized mechanic) could reduce labor time. However, these mechanics typically have higher rates so you might not save money after all.

The table below shows how long it takes to replace the MAF on popular car models, on average*:

*Average labor times were calculated based on quotes received from different mechanics for the specific car types mentioned in the table. Average labor prices were calculated as a pro rata considering the national average range ($90 – $150). Estimates are correct as of October 2022 and intended to be used as reference only.

Whether you take the car to a dealership or independent mechanic also has an impact on costs.

These mechanics are highly trained in solving issues for a specific car make, and you have to pay for the expertise.

Dealerships also replace parts with genuine ones manufactured by or for the car brand. These parts can be more expensive than aftermarket or secondhand components.

Independent mechanics are cheaper and may agree to use a compatible or secondhand replacement if you want to keep costs low. This solution is the cheapest if you own a frugal car type.

However, if you own a luxury brand, an independent mechanic may not have the expertise to service it. This could result in sub-par work and a longer time spent to fix the part; hence, more labor hours billed.

In broad lines, it is best to take a luxury or rare vehicle to the dealership. Most independent mechanics are skilled enough to replace MAF sensors on common city or family cars.

Mass airflow sensors are known to be troublesome in certain car makes, including BMW, Toyota, Mazda, Volkswagen, and Nissan.

However, this sensor might not break on its own. If you don’t replace it promptly, other components of the injection system and engine may also fail. In this case, additional repairs may cut an additional hole in your budget.

The table below shows the average costs of some additional repairs related to the MAF sensor*:

*Average costs in the table are calculated based on national quotes for each specified service. They are correct as of October 2022 and intended to use as reference only.

How Long Does It Take To Replace A Mass Airflow Sensor? 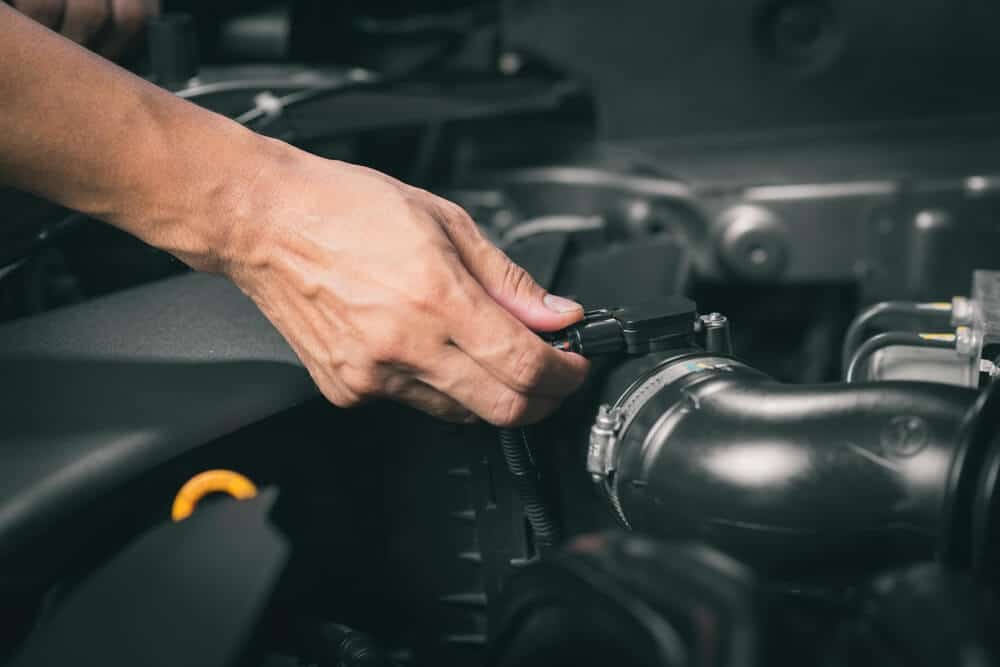 The mass airflow sensor is located between the air filter and engine manifold, and can be accessed from under the hood, without lifting the vehicle.

Replacing it is typically a fast job, with skilled mechanics taking under an hour to complete it.

However, not all cars are created equal.

Some vehicles can have the MAF sensor placed in a more awkward position or covered by additional components. In this case, it could take an hour or more to remove the old part and install a new one.

How many miles should a MAF sensor last?

With proper maintenance, a mass airflow sensor should last up to 150,000 miles.

Some manufacturers don’t even specify a lifespan, meaning that the sensor should last for as long as your car does. However, debris and improper maintenance could shorten its lifespan to about five to ten years.

Can I run the car without a MAF sensor?

You can run the car without a mass airflow sensor, but you shouldn’t.

Without this sensor, the engine computer can’t calculate how much fuel to inject into the system. To keep the engine running, the computer will estimate the amount of air in the engine and inject fuel accordingly.

However, this could lead to the injection of too little or too much fuel, which could in turn damage the engine.

How often should a mass airflow sensor be cleaned?

To prevent malfunctions and costly repairs, the mass airflow sensor should be cleaned about twice a year.

What are the signs of a bad MAF sensor?

In modern vehicles, a light on the board and an error code will signal a MAF sensor malfunction. Other signs include engine stalling, rough idling, bad fuel economy, or acceleration hesitation.

The average mass airflow sensor replacement cost varies from $305 to $410, including parts and labor. Your location and car type have a direct impact on the cost. Additional repairs can set you back up to $1,160.