A car’s suspension system plays a crucial role in the safe and easy handling of the vehicle. Repairing a bad suspension as promptly as possible is crucial.

However, depending on the suspension type and damage, this could cut a hole in your budget. 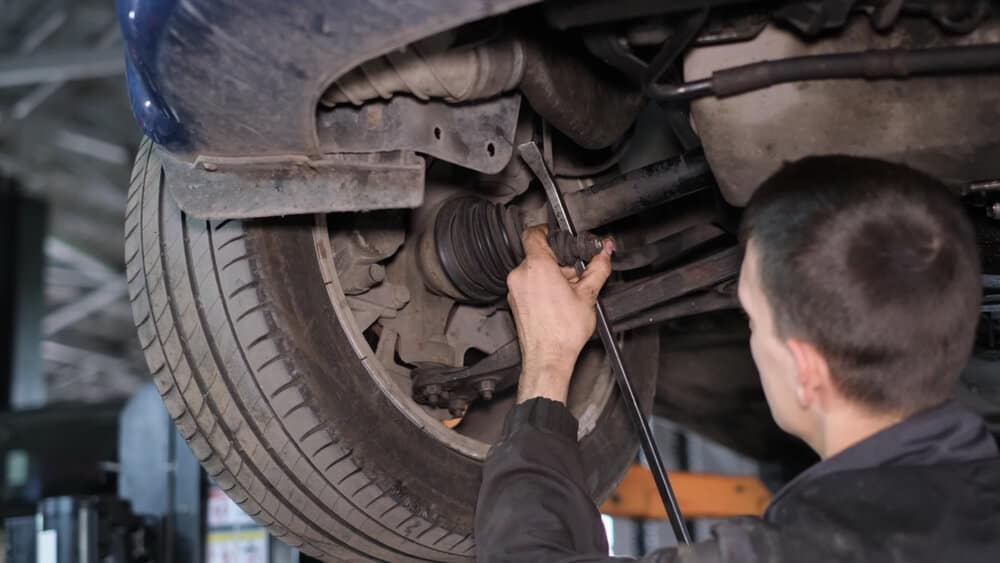 The average cost of repairing a suspension system varies from $713 to $6,595, including parts and labor. Your vehicle’s make and model, the type of suspension, damage extensiveness, and your location can influence the price. Replacing each of the system’s components as needed, such as the springs, shocks, or ball joints, is cheaper and can prolong the system’s lifespan.

How Much Does A Suspension System Repair Cost?

The main factor that influences the suspension system repair cost is the type of vehicle. Manufacturers use different suspension types, the costs varying greatly from one another.

*The average costs in the table were calculated based on quotes received from various auto repair shops and specialist mechanics across the USA. They are correct as of October 2022 and intended to be used as reference only. Actual costs may vary based on your specific vehicle, the suspension type, location, damage, and whether the part can be repaired or must be replaced.

Suspension systems consist of several individual parts that work together to improve handling and steering stability, and to maximize the contact surface between tires and road.

These parts are located near the wheels, at the bottom of the vehicle. They are constantly exposed to speed bumps, rocks, and other debris. The constant friction between the components also causes wear.

More often, suspension problems are caused by only one damaged component. However, if the car isn’t maintained properly and suspension issues aren’t addressed promptly, the entire system could become compromised.

The average cost of repairing a suspension system depends on what component is faulty and the type of car.

Ball joints are the cheapest to repair or replace, costing car owners between $243 and $670 on average, including labor. Quality ball joints for popular cars like Ford, Honda, or Toyota typically cost between $100 and $150.

Cheaper models are also available on the aftermarket or you could find secondhand ball joints at salvage yards.

Ball joints for imported luxury cars like Mercedes-Benz, Audi, or BMW can cost over $600. Labor is also more expensive for repairing these vehicles.

Shocks and struts are the most expensive components, with prices ranging from $793 to $3,300, depending on the vehicle’s make and model.

Other factors, such as your location and additional repairs or miscellaneous parts can also influence the final price. 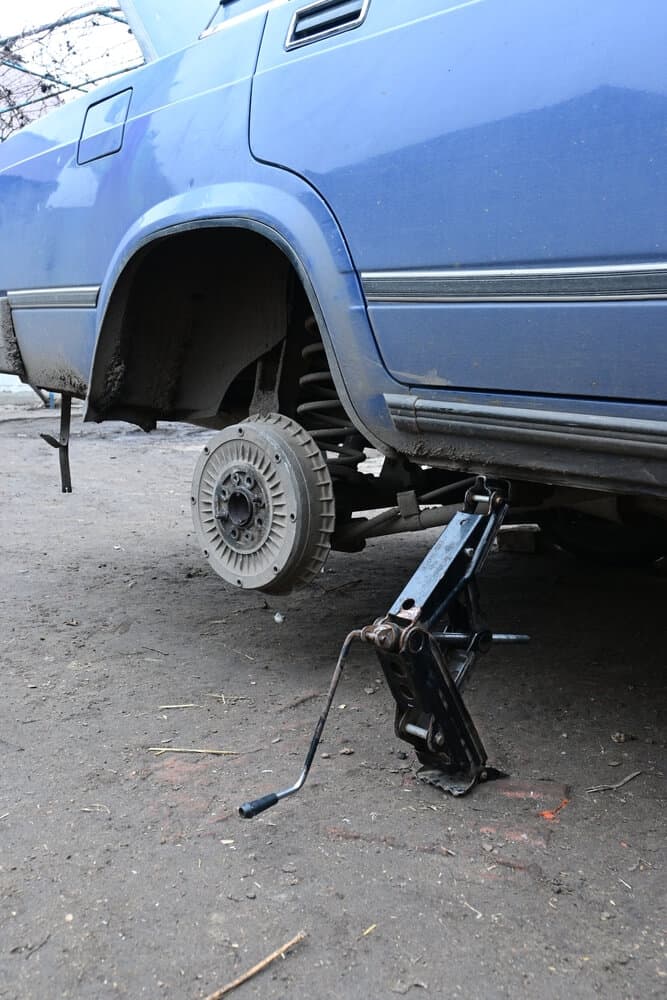 The suspension type and damage extensiveness are the two main factors that determine the suspension repair costs.

Another important factor is the type of car you drive. Luxury cars imported from Europe typically require brand-specific expertise and are costlier to repair.

The table below shows a list of average suspension system repair costs*:

*All costs in the table are industry averages correct as of October 2022 and should be used as reference only. Actual prices and quotes can vary based on location, vehicle specs, type of damage, automotive repair shop tariffs, and actual work required.

There are four major types of suspensions, but two are the most common in modern cars: air suspensions and coil springs

Coil springs are the most common type of suspension among automobiles and trucks. Their helical shape can absorb shocks while taking on heavy loads and are very silent – a reason why they replaced leaf springs in most vehicles.

Their main downside is that they can be extremely bouncy when paired with poor-quality shocks, and the reason they are avoided in some smaller vehicles – in this case, they are often replaced by torsion bars.

Because coil springs struggle to take side thrust and torque reaction, they must be paired with shock absorbers. Nevertheless, they are the cheapest suspension type.

The average coil spring replacement cost varies from $572 to $640 for parts and labor.

As their name implies, air suspensions utilize air chambers positioned between the bottom of the car and the wheels. They enhance ride comfort, allowing the vehicle to glide smoothly over bumps.

According to enthusiasts, they also offer enhanced performance as well as added adjustability to rise and lower at will.

The main downside of air suspension is its price. Their average repair cost varies from $1,524 to $1,640 for parts and labor.

Car suspensions consist of three major parts: shocks and struts, ball joints, and coil springs or air suspensions. Repairing the system is cheaper if only one or two of these components are damaged.

The table below shows a comparison between average repair prices for various suspension system parts*:

*Costs in the table were calculated based on market prices for various suspension system parts or kits and include labor costs. They are correct as of October 2022 and intended to use as reference only.

Positioned between the suspension’s control arm and the car’s body frame, the suspension springs or air bags support the weight of the vehicle and dampen the shocks when riding over bumps.

Due to their constant motion, the coil springs or air suspensions are the system’s parts that suffer the most wear.

Basic coil springs typically cost under $300 for the front and rear suspension system. On average, you can expect to pay around $572 to replace them.

However, air suspensions cost around 2.5 times more, with average prices of around $1,475. The car’s make and model usually influences the price.

Ball joints are located on each side of the front suspension near the wheels. Their role is to aid in steering, enabling the wheels to turn left and right. At the same time, they also allow the control arms to move up and down, dampening the shocks.

Ball joints are the least expensive component of the system, costing between $243 and $670 on average, including labor. For non-luxury cars, though, the average cost to replace them doesn’t exceed $344.

Also called shock absorbers, these components stop the motion of the springs while dampening the shocks. Thanks to them, the car won’t bounce forever after hitting a pothole or other bumps in the road.

Shocks are the most expensive part of a suspension system, costing around $793 on average for a basic car. Their price can go over $3,000 for luxury vehicles.

These bars and arms can usually be straightened if required and rarely need replacement. If you have to replace the entire system, though, you can expect to spend between $1,608 – $5,445 on average, depending on your car’s type.

Another factor that influences the suspension system repair price is the need to perform additional repairs or replace miscellaneous parts (such as bolts or other types of fasteners) that mechanics typically reuse.

A rusted suspension or part may also be harder to remove and repair than originally anticipated.

More often, additional repairs or miscellaneous parts won’t cut a true hole in your budget. You can expect to spend under $150 on average.

Any major repair work or modification of the suspension system typically affects the steering pull and car wander.

This is why a wheel alignment usually goes hand-in-hand with suspension repairs – there are a few instances when aligning the wheels might not be necessary, but it’s recommended to perform this step anyway.

Wheel alignment prices start around $90, with an average between $100 and $250 depending on your location and auto repair shop.

The make and model of your vehicle also affects the price.

For instance, wheel alignment for Ford F-150 costs between $77 and $108 on average. You could pay around $250 to align the wheels of a Mercedes-Benz, though.

Your location doesn’t affect the cost of necessary parts – even though they could fluctuate depending on where you live – but it affects labor costs.

Mechanics charge between $90 and $150 per hour on average. These are nationwide rates, but you may find cheaper prices in Michigan, for example. Hourly charges in Detroit vary between $80 and $100 on average.

At the opposite end is California, with an average cost of $145.16 per hour. Wyoming, New York, and Florida are also more expensive than the national average.

Because they are rather new, you may also have to take the car to a mechanic experienced in this suspension type. Things can get even more complicated if you’re replacing the air suspensions of an imported luxury car.

European cars are typically constructed differently than US vehicles, and your neighborhood mechanic might not have the expertise to repair them. Professionals trained in repairing European cars often charge higher rates.

Repairing or replacing the suspensions on an old and poorly maintained car is also more expensive than repairing a broken part on a well-maintained vehicle.

How Long Should Suspensions Last?

Replacing your car’s suspensions can be expensive, so you might not be too eager to do it very often.

As long as you maintain the car properly and drive on good roads, your vehicle’s coil spring suspensions should last between 50,000 and 80,000 miles.

Under the same conditions, air suspensions should last between 80,000 and 120,000 miles. This is around eight to ten years on average.

However, keep in mind that you should replace the suspensions whenever they become damaged, regardless of the mileage.

For this reason, it is crucial to have them inspected each time your vehicle needs a wheel alignment job (around once a year or when changing the tires).

Can damaged suspensions be fixed?

Damaged suspensions can be repaired if the faulty part is the suspension spring or air bag, ball joints, or shock absorbers. These parts can be removed and replaced while keeping the arms and anti-roll bars of the original system.

If the control arms or anti-roll bars are bent or damaged, the suspension can’t be fixed and you must replace the entire system.

A knocking or clunking sound from under the car is typically the first sign your suspensions are broken.

You may also observe an unusual steering pull, and the car might be more difficult to handle than usual. When passing over potholes or bumps, the car might bounce only minimally or not at all.

How to protect my car’s suspension?

To prevent unnecessary damage of the suspension system, check the wheel alignment periodically and adjust when needed.

Check the tire threads and replace the tires when they become worn out. You should also check the tire pressure and maintain it within the limits recommended by your car’s manufacturer.

Check the steering fluid and belt periodically. Replenish the fluid and replace the belt to prevent unnecessary strain on the ball joints.

The average cost of repairing a suspension system varies from $713 to $6,595 on average. The type of suspension, amount of damage, and type of car have a direct impact on the costs.

Your location can also influence the price, since mechanics in various states charge different rates.

As a general rule, you should add a margin of about 20 percent more than your quote so that you can cover any additional parts and repairs.