When your struts go out or go bad, you’re either in for a bumpy ride or you won’t be able to drive at all. While shocks and struts are often confused, struts are more important in that they support the vehicle.

Here, a strut connects the vehicle’s suspension to the frame. It also absorbs shock and jolts so you get a smoother ride.

When they start to go bad, you’ll have symptoms ranging from bouncing and jolts to vehicle instability. 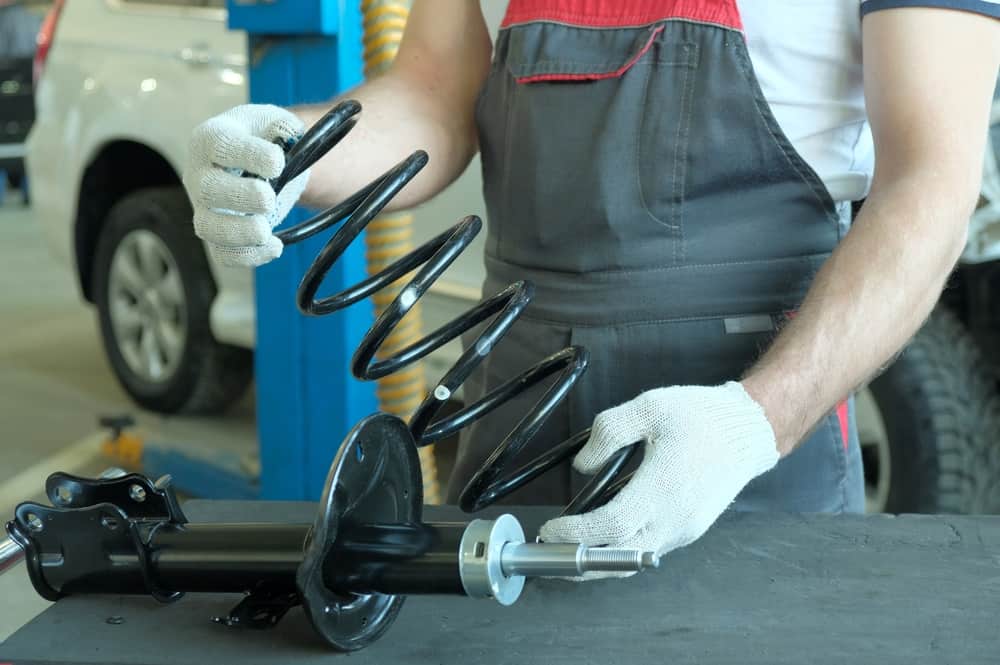 The table below shows a quick price comparison of strut replacement cost estimates from reputable suppliers:

Strut replacement costs normally depend on the make and model of the vehicle, how many struts you have to replace, and the cost of labor. These costs vary significantly between make and model but average $350-$650.

The following chart outlines the costs of struts for 10 popular vehicles.

The largest factor impacting the cost of installing new struts in your car is the make and model of the vehicle. However, other factors like the mechanic’s hourly rate are almost as important.

Here, you’ll have to consider whether you have shocks and struts or just struts. You’ll also want to know what type of struts you have.

The make and model of your vehicle greatly impacts the cost of struts or shocks. Here, differences include design, cost of labor, brand, what the manufacturer charges, and even what the struts do.

With dozens of different types of struts on the market, some cars are even unique. Here, performance cars almost always cost more.

For example, in the first charge, YourMechanic charges about $250 for parts to replace two struts on the front-end of a Toyota Corolla. On the other hand, the same parts in a Porsche cost $1400.

Performance cars always have more costly parts. In the case of struts, that also means the parts are designed to handle more impact, offer less resistance, or improve braking and turning.

You get what you pay for. But, in most vehicles, it doesn’t matter too much.

The other vehicles on the list above have rear shocks instead.

New parts always cost more than remanufactured. That’s because it costs significantly more to manufacture new parts than to repair old ones to meet manufacturer standards.

However, not all mechanics will install remanufactured parts. Here, you’ll want to check with your mechanic to see.

However, used or remanufactured parts might cost as much as 60-80% less than new ones.

Aftermarket or “made to fit” parts always cost less than the Original Equipment Manufacturer. These parts are made to fit the largest range of vehicles possible.

That allows for aftermarket shocks on Walmart and Amazon to sell for as little as $20-$50 per strut.

That also holds true if you go for OEM through a dealer. You’ll usually pay about 50-60% more than you would through a mechanic.

However, you will know that the work is covered and guaranteed by the dealer, which may be worth the extra cost depending on your budget.

Labor is often the most considerable cost of replacing struts in your vehicle.

Here, the mechanic has to take off the wheel, the axle, nut, and then disengage the strut from the control arm and the frame. This can take some time.

On average, you’re looking at a 3–4-hour job. However, if your car is complicated or bolts are seized, it could take much longer.

However, on average, you can expect to pay about $300 to replace two struts. If you have a vehicle with four struts, you’ll likely pay around $550-$600.

4 Signs of a Bad Strut

It can be difficult to tell the signs of a bad strut from those of any other part of the suspension system.

However, if you have any of the following four symptoms, it’s important to inspect your struts or have them checked. All four symptoms can make it dangerous to drive.

And, of course, if your tires are wearing unevenly, it’s almost always a sign of a suspension issue.

If your vehicle is tilted or one end of the front end is hovering higher than the other, you likely have a strut issue.

Here, you’ll likely notice your vehicle sways when driving or even when you push on the hood. That often means one side of the suspension is bad.

You may be able to get away with replacing just one strut. However, as the conditions that cause one to go out often cause both to go out, that may not be the best idea.

Bad shocks can cause your car to swerver or pull, especially when you hit the brakes. This happens when one strut is bad and the car is weighing to one side.

Normally, this means the strut is no longer supporting weight like it should be. However, this problem is more common with bad shocks.

However, if you’re having trouble keeping the steering aligned with the road, it’s a good sign that something is wrong with the struts. In most cases, you’ll notice you have to turn the wheel a little to one side to keep it going straight.

And, if you let go of the wheel, the vehicle probably veers to one side. That’s a sign that you should immediately have your struts replaced.

If your steering wheel is rattling or shaking when you’re driving, even on a good road, it’s a good indicator something is going wrong with the suspension. That could be the struts.

However, it might also be the tie rods, control arm, tension bars, or any other part of your suspension.

You might also notice that your vehicle is less comfortable on average. If your driving is bumpy and uneven, it’s probably because the struts aren’t absorbing as much of the shock from the road. That’s unpleasant for you to drive.

However, it also means more wear and tear on other parts of your suspension, which could result in extra repair costs if left unattended.

If your front end is clunking, griding, or knocking when you go over bumps, it’s usually a sign that the struts are bottoming out. This means the coil springs are overloaded and are on the verge of breaking.

This normally means it’s important to get a checkup ASAP before something happens while you’re driving.

You can almost always replace the struts in your vehicle with a few hours of work.

This guide is focused on replacing the front strut in your vehicle. That’s because most modern vehicles have a Macpherson/front coil strut in place.

In addition, you almost always want to replace your struts together. Having one newer and one older strut can result in an uneven ride.

In addition, the same factors that cause one strut to fail are likely to impact both.

From there you can test your suspension. In most cases, you should have your front-end balanced after replacing the struts.

You should also test the steering in a parking lot or the yard before driving on the street.

Struts don’t have to be replaced often, so you likely don’t have a lot of experience with them.

What happens if you don’t replace struts?

Your vehicle could become dangerous to drive. You may also end up stranded if your strut breaks and your vehicle is no longer supported on one side.

In either case, it’s dangerous to drive a vehicle with bad struts.

How long do struts last?

In some cases, struts will last the lifetime of the car. However, they might also break at 30,000 miles.

Sometimes this is down to driving conditions or manufacturing issues. In other cases, it’s down to maintenance and wear and tear on other parts of the vehicle.

Is it OK to replace only one strut?

In addition, the conditions that cause one strut to fail are very likely to cause the other strut to fail. Therefore, it’s always better to replace both at the same time.

Are shocks better than struts?

Struts and shocks are not interchangeable.

Struts support the car and function in place of an upper control arm in a Macpherson strut system. Shocks do not provide support and instead absorb shock.

Both have the same goal of creating a smoother ride, but struts are much more integrated into the vehicle.

Replacing a strut can be a costly job, even if you do the work yourself. However, it will improve your steering, braking, and general handling.

In most cases, you can expect a strut replacement to cost anywhere from $300-$800 for both front struts. Back struts normally cost less to replace.