If you’re seeing oil spots in your driveway or garage, it’s a big sign your engine needs work. Oil leaks are extremely common and can result from anything from a simple degraded filter to a gasket issue. 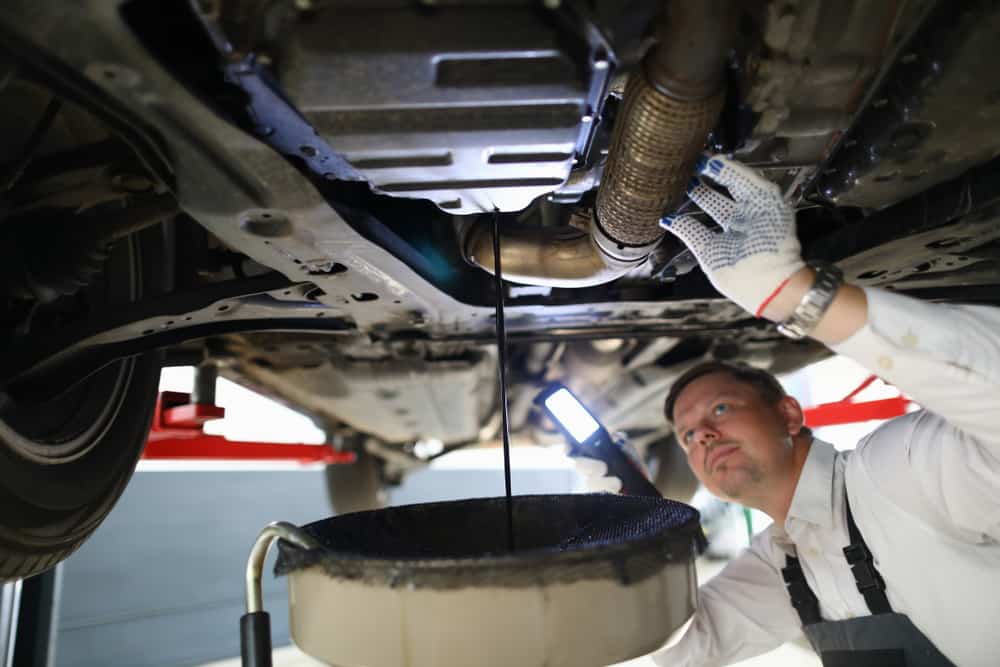 This means the average cost of oil leak repair can range from about $15 for a DIY job to well over $1500. If you’re lucky, an oil leak is a result of overfilling the engine. You might also need a new oil filter. Or, the oil drain plug might require tightening. If you have one of these problems, a mechanic should charge you $40-$75 to fix the problem. On the other hand, if you’re using synthetic oil, that can go up to $125.

However, if you have a gasket, valve seal, or piston ring issue, the cost of your oil leak repair will go up exponentially. Here, you’re usually paying as little as $14-$60 for a valve seal replacement. However, the cost of labor can range between $200 and $2,000+. That’s because you have to take the engine block out and reinstall it to change the seals.

The same is true of replacing a head gasket, which can also cause an oil leak. If the gasket seals are old or damaged, oil leaks. You might be able to get away with replacing the seals on the head gasket. This will cost as little as $200 for the seals. However, you’ll still pay as much as $2,000 for labor, because ripping the engine block out is labor intensive. If you have to buy a new head gasket as well, you’ll normally pay $1,500-$2,000+ for it as well.

Essentially, the cost of repairing an oil leak varies significantly. If you’re lucky, it will cost you less than $100 and a few hours at the mechanic. If you’re not, the cost of the repair could be well over $2,000.

The table below shows a quick price comparison of oil leak repair cost for the most common oil leak issue, a filter, estimates from reputable suppliers:

Importantly, if you’re paying a chain stop or a mechanic to change your oil filter, they’re selling the labor, the new filter, and the cost of the oil.

For this reason, costs will vary if you get high mileage or synthetic oil instead of standard.

In addition, you’ll want to pay attention to whether a new filter is included in the oil change.

How Much Does Oil Leak Repair Cost?*

The make and model of your vehicle heavily impact the cost of repairing an oil leak.

Why does it matter? Some vehicles are easier to take apart and access than others.

In some cases, actual parts are cheaper or more expensive. For example, fixing a BMW oil leak always costs more than fixing a Nissan oil leak.

In the following chart, we’re sharing estimates for the cost of repairing another common oil leak, an oil pan gasket replacement.

This leak is unfortunately a lot more expensive to fix than a filter issue.

As you can see, pricing varies significantly even for the same model.

This means it’s difficult to predict exactly what this kind of oil leak repair will cost without asking a mechanic.

The cost of an oil leak varies significantly depending on factors like your vehicle, the leak, the number of leaks, and the condition of your vehicle.

We’ll go over some of those factors, so you can better understand what your oil leak repair should cost.

Simple filter leaks are fast and easy to repair. If your oil leak is a result of a bad filter, cracked caps, or improperly fitted oil plugs, your repair will cost very little.

Similarly, oil pan issues can be cheap to fix. For example, you can replace the oil pan gasket for as little as $50 if you do the work yourself.

On the other hand, piston, valve seal, and other gasket issues can cost significantly more. In most cases the large part of the cost involved is labor.

For example, if you have to replace gasket rings, you have to pull the engine block out. This is time-intensive and normally requires specialty equipment.

Why? The engine block with attached cylinders can weigh anywhere from 200-1000+ pounds. It’s difficult and even dangerous to remove it without lift equipment.

You can expect some of the following price ranges for parts:

If your gaskets are very damaged, it can require significantly more effort to repair the leak. That’s one reason why it’s important to take your vehicle in to have the oil leak fixed as quickly as possible.

The longer the problem persists, the more hot oil on the mechanism is likely to cause damage.

Part cost, time to take apart the engine, time to fit new parts, and availability of parts all vary considerably by vehicle.

You’ll normally find that the largest price differentiators are between vehicle make and model.

However, you might see significantly different pricing quotes based on vehicle age as well.

Mechanics charge different rates. Someone in a rural area with a lot of competition might charge as little as $15 per hour.

If you need specialty work and experience, you might pay over $200 per hour.

The average cost of a mechanic works out to around $60 per hour. However, that might not include extras like garage fees – which is a fee per day your vehicle takes up space in the garage.

If you see chain shops offering menu prices for oil changes (E.g., $49.99 for an oil change with coupon), it’s usually not for synthetic oil.

Unfortunately, if you have an oil leak, you’ll always have to change the oil.

Signs and Symptoms of Oil Leaks

If your oil is leaking, you’ll probably notice the problem fairly quickly. For example, you’ll notice the engine oil gauge going down quickly.

It might seem like your car is burning through oil. More often, the problem is that it’s losing oil in other places.

If you have blue or white smoke coming out from under the hood or behind the car, it usually means an oil leak. Engine oil heats and turns white or blue as it burns off the engine.

While it’s rarely a fire hazard or risk because engine oil requires significant and consistent high heat to ignite. However, you still want to have it fixed as quickly as possible to reduce hazards.

Puddles or Spots Under the Car

If you see puddles or spots under your car, it’s almost always a sign of an oil leak. However, if you’ve recently had the oil topped up, you could take a minute to check common problems.

Finally, you could double check the placement of the oil drain. If it’s not in properly, it could be leaking.

That’s also important if you have just replaced the oil filter. Screwing the filter in too tight can actually result in leaks.

From there, you can look at the plug gasket in the drain, the oil cooler lines, the gaskets, the oil pan, and the pistons to see where oil is coming from.

Spots under the car can also help you to diagnose where the problem is coming from. After all, if they’re directly under the filter, it’s not likely a spark plug O-ring issue.

If your engine is overheating, low oil or oil on the engine might be the culprit.

That’s especially true if the engine also starts to smoke.

If you’re burning through oil and constantly have to add more, a leak might be the cause of the problem.

However, there are other reasons your vehicle might burn through oil as well.

Therefore, you should physically inspect the reservoir, the filter, the lines, and the gaskets for signs of a leak before assuming.

How Are Oil Leaks Repaired? (Process)

Repairing an oil leak can vary a great deal. For example, if you have to replace the seals in your gasket head, you’ll have to pull the engine out.

But, if you have a simpler issue, like a filter problem, you can often screw the filter out and put a new one in. The fix should take you about 30 minutes.

In this case, we’ll offer a guide on a very common cause of engine oil leaks if the O-rings or gaskets around your spark plugs are degraded. Here, the simplest fix is simply replacing the gaskets.

Is this your issue? If you take the spark plugs out, are they covered with oil? Then, likely, yes!

If you have a small hand pump, you can use this to empty oil from the valve casing to ensure the gasket goes on more cleanly.

Oil leaks might be simple. They might also relate to complex issues that cost thousands to fix.

The following related questions might help you deal with your oil leak issues.

Can you drive a car with an oil leak?

In most cases, you can safely drive a vehicle with an oil leak. However, the longer you do so, the worse the damage becomes.

In addition, leaking oil can be a hazard to your engine. It might also cause problems for other drivers.

For example, if you have a considerable leak, it can cause a slipping hazard for motorcyclists on the road.

The best option is always to have your oil leak repaired as quickly as possible.

Can a head gasket leak oil?

Yes. Unfortunately, head gasket leaks are one of the most common oil leaks. This happens when the gasket gets old and brittle or damaged because of excessive heat or cold.

In addition, engine oil additives rarely work. If they do work, they also tend to be very temporary fixes.

What to put under a car that leaks oil?

Many garages use cat litter to absorb leaking oil.

This material is cheap, absorbent, and clumps so you can dispose of the oil with a minimum of fuss.

If your car is leaking oil, you want to fix it as quickly as possible. Unfortunately, your engine might be leaking oil for a number of reasons.

That also means fixing an oil leak ranges in cost. Here, you can expect anywhere from around $40 to well over $2,000.

Therefore, the most important first step is diagnosing the cause of the leak and budgeting from there.