If your seat belt breaks, wears down, or otherwise stops working as expected, replacing it is usually the only way to fix it.

When that happens, you’ll have to go to a mechanic, body shop, car interior specialist, or your dealer to have it fixed.

How Much Does a Seat Belt Replacement Cost?*

The cost of replacing a seat belt will normally heavily depend on the vehicle, the type of seat belt, and the cost of labor.

The following chart compares the cost of replacing a seatbelt in several popular vehicles.

Normally, the largest costs involved in replacing a seat belt include the cost of the part and the cost of labor. Both of these heavily depend on the vehicle you have.

However, other factors like part availability, cost of labor in your area, and type of seat belt also matter a great deal.

Normally, the most cost-effective way to replace a seat belt is to replace the full belt including the tensioner and buckles at once.

If you have to open the retractor or remove any of the other pieces to keep them, you can expect to spend much more time on the full process.

On the other hand, if the rest of the mechanism is also starting to wear, it makes a lot more sense to replace everything at once.

Here, a standard 3-point seatbelt is normally made up of the retractor, pillar loop, tongue, end bracket, and buckle.

Everything between the retractor and end bracket is normally sold as a kit – although you may be able to purchase a new belt without the end bracket.

On the other hand, the buckle and the retractor are the two parts that are most likely to fail.

Seatbelts are commonly sold as 2- or 3-point systems with each a shoulder strap and lap belt or just a lap belt.

Here, lap belt systems normally cost $20-$30 because they don’t have a retractor. On the other hand, 3-point systems, which are required in front seats, normally cost upwards of $50.

If you need a new tensioner or retractor, that alone can cost $50-$200. Therefore, it’s almost always more affordable to simply purchase the full replacement belt at once.

In most cases, you can expect to spend 30-60 minutes per belt on a replacement job. If you’re just replacing one seatbelt, chances are, you’ll pay for an hour of labor.

In addition, you might not want to take your car to a mechanic. There are plenty of car interior specialists who would be more familiar with replacing the seat belt. If you have one in your area, it doesn’t hurt to call and ask for a quote.

The make and model of the vehicle will always affect the price of replacement seat belts, providing you want Original Equipment Manufacturer or OEM parts.

In addition, getting OEM means you can trust that the quality and durability of the parts match the original. If you go for an aftermarket seat belt, you won’t have that guarantee.

Still, you might choose to, especially if you’re on a budget, the car is old, or you don’t like the original buckles.

Signs You Need a New Seatbelt

While you can often repair your seatbelts instead of replacing them, sometimes it’s better to simply take them out and replace them. 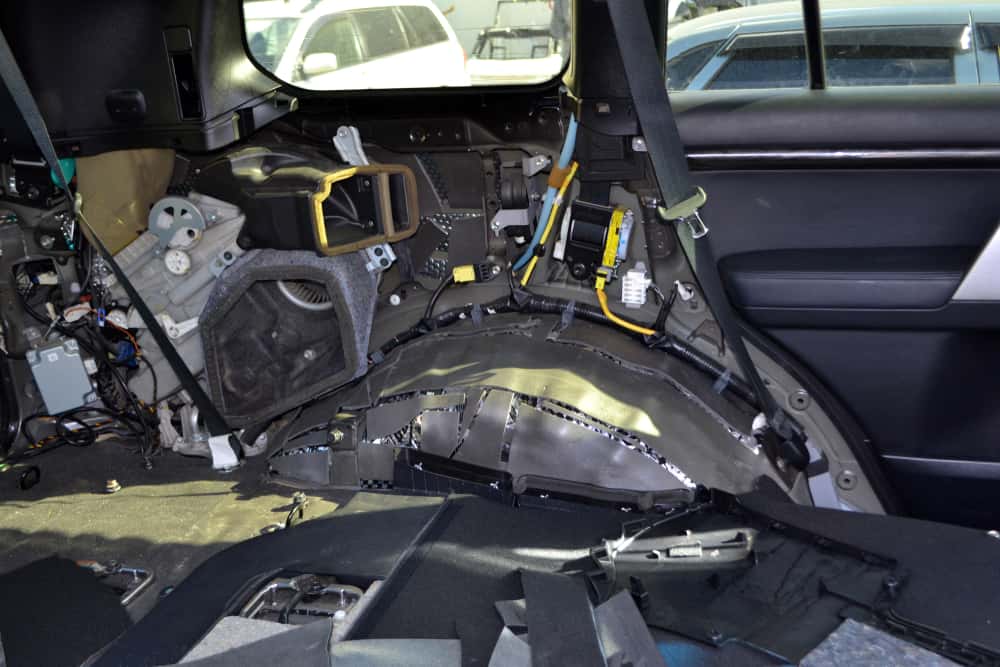 The following signs are a good time to opt to scrap your old seatbelts and get new ones.

If your buckles aren’t clipping to the tongue properly, there’s a large chance you’ll just have to replace the buckle.

However, that doesn’t mean you’ll have to replace the full assembly. Instead, you could get away with replacing the center buckle and nothing else.

Here, you can also inspect the buckle assembly to see if it’s clogged, dirty, or otherwise jammed. If you can spend a few minutes with a toothpick cleaning out the mechanism, you might be able to restore functionality.

On the other hand, wear and tear often means you’ll lose buckle functionality over time. When that happens, you’ll have to replace the buckle.

If you do replace just the buckle, you’ll have to ensure it matches the original tongue. That’s important because buckles come in different shapes and sizes, and sometimes with completely different tongues than others.

If the retractor is loose, too tight, or doesn’t work, it’s probably time to get a new seat belt.

Here, retractors are extremely difficult to take apart and repair. Therefore, when something goes wrong, it’s very likely that the next step is to simply replace the seat belt.

That’s because retractors rely on a spring mechanism. When the spring wears out, the entire rotary system no longer works as intended.

Of course, you can have the full system taken apart and reengineered, but it will cost you.

If your seat belt itself is damaged, you might think it’s efficient to just replace the strap. Unfortunately, that often means taking apart the retractor or tensioner mechanism.

Doing so can cost several hours of work, meaning it will cost you more than simply replacing the mechanism.

However, if your seat belt is frayed, torn, or wearing thin, it’s time for a new one. A worn seat belt won’t protect you in case you get into an accident. And, fraying or tears could indicate damage inside the retractor.

4. After a Major Accident

Most modern cars have a device known as a pre-tensioner, which uses a small charge to drive a piston and tighten the seatbelt in case of a major accident. When this happens, you’ll have to replace the seatbelt.

The pre-tensioner will normally cause the cover to sag, and the retractor mechanism will be more difficult to operate than before.

In any case where you’ve been in an accident and your retractors are misshapen or sagging, it’s time for a new seatbelt.

How to Replace a Seatbelt: 7 Steps

In most cases, more than half the cost of replacing a seat belt is labor. If you have time on your hands, you can often save money by doing the work yourself.

In most cases, you’ll need at least an hour for the first seatbelt. But, after you figure out what you’re doing, any additional ones should go faster.

How to Replace Your Seatbelts

If you’re replacing a lap belt, you normally only have to unbolt the connection from under or behind the seat.

If you still have questions about replacing your seat belt, these answers should help.

Can you replace just part of the seat belt?

It’s almost always possible to replace just part of the seat belt. In fact, many manufacturers sell seat belts by the part, meaning you can select whatever you want to replace.

However, most seat belts have a lifespan of 10-15 years, and you may want to simply replace all of them.

Is it necessary to replace a seat belt?

If your seat belt is ripped, torn, damaged, or not clipping properly, it’s not safe to drive without replacing it.

Can I replace a seat belt myself?

It’s normally very easy to replace a seat belt yourself. However, you normally need some non-standard tools, like hex nut wrenches or sockets.

You can take the covers off your seatbelts or check the replacements to be sure.

If your seatbelts are old or worn or not functioning properly, it’s time to get new ones. In most cases, you can expect the average cost of replacing seat belts to be $150-$250 including parts and labor. If you do the work yourself, that can drop to as little as $20 per, but you might spend quite a bit on specialty tools as well. Good luck with replacing your seat belts.