Leaking coolant, low coolant, or engine overheating are all signs you need a new radiator hose. When that happens, replacing the hose is a relatively straightforward job and you can quickly get your vehicle back on the road.

However, the cost and time to finish the job depend on which part of the hose is damaged. 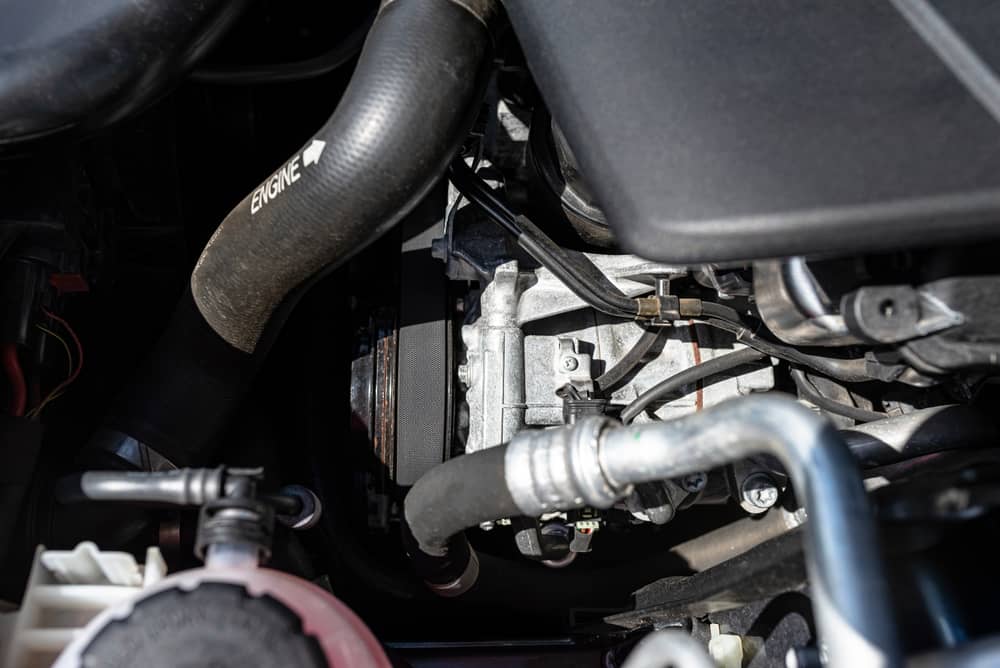 The average cost of replacing a radiator hose is $250-$350 if you’re replacing the full system. That includes about $100-$250 in parts and the rest is labor. On the other hand, if you just have to replace a section of the radiator hose, like the upper or lower or the heater hose, part costs can be as low as $14, and labor will be cheaper as well.

How Much Does a Radiator Hose Replacement Cost?*

Often, the largest cost factors in replacing a radiator hose are the cost of labor and the number of hoses you want to replace.

If you buy a full radiator hose kit, it will almost always cost $80-$250. On the other hand, you might only have to replace a small part of the hose.

In addition, labor costs vary based on factors like how many parts you have to remove to access the hoses, how small the engine compartment is, etc. For example, the following chart shows estimates for replacing a radiator hose in different vehicles:

Otherwise, some factors like the brand will also affect costs.

Part of the Radiator Hose Assembly

The radiator hose assembly consists of a large number of interconnected hoses which circulate coolant from the radiator, through the engine, to the heater, and back to the radiator.

Individually, most of these parts cost about $1-$45. However, if you buy a full kit with all of them, including new seals and gaskets, you’re normally looking at $80-$250.

Although, some brands and aftermarket providers will offer a lower price of about $60.

However, that also impacts the total time of repair. For example, if you’re replacing just the lower radiator hose, you have to take those parts out and replace them. If you’re replacing the full hose assembly, it’s a much bigger job.

In addition, the location of the part impacts ease of access. Heater hoses are much harder to access and replace than the upper radiator hose, and so on.

In most cases, you can expect to pay for 1-2 hours of labor for replacing the full radiator hose assembly. In most of the U.S., that means rates start out at around $95 and go up to about a maximum of $370. In most cases, you’ll pay even less if you’re replacing a smaller section of hose.

However, many mechanics do have a minimum charge of an hourly rate. So that may not be the case.

In addition, rates vary significantly from about $15 to upwards of $210 per hour. So, the exact cost will depend on where you go.

The make and model of your vehicle impact the availability of parts. However, it also impacts the size of the compartment, how parts fit together, and much has to be removed to do the work.

Radiator hoses are sold by many brands and many of them are interchangeable. However, an aftermarket or generic part will be a lot cheaper than an original equipment part and that will be cheaper than a performance part.

You can choose options based on your budget and your needs.

4 Symptoms of a Bad Radiator Hose

If your radiator hose is going out, the biggest symptoms are an overheating vehicle and coolant leaks. In most cases, you won’t notice anything else.

However, you can inspect for other symptoms once you notice those.

If you keep getting a low coolant light, it probably means there’s a leak. This is often because of seals or radiator hoses themselves, which are prone to damage.

Most radiator hoses are made of plastic or rubber, which gets hard and brittle over time when exposed to heat. If your hoses are very old, they could have cracked.

Alternatively, you might have issues with the seals, with connections, or with a puncture. If you keep losing coolant, it’s a good idea to inspect the full system to look for leaks, wet spots, and physical damage.

If you have a coolant leak, chances are high it’s from a hose. You can check around seals and try to trace the source of the leak to be sure.

The radiator system primarily exists to keep your engine cool. So, if the engine temperature is up or you’re fully overheating, it likely means something has gone wrong with the coolant system.

A damaged hose, low coolant, and leaking coolant are all common culprits.

Here, it’s also a good idea to check for clogs, damaged connections, and instances where the hose might be kinked or crimped, which would stop proper coolant flow.

If you’re having other issues with the coolant, it’s always a good idea to inspect the radiator hoses and connections to look for damage.

Here cracks, crimps, kinks, breaks, punctures, and collapse are all good indications it’s time for a new radiator hose. If you’re not sure but have leaks anyway, you can replace it just in case.

In most cases, radiator hoses should last about 5 years before you have to change them again.

How Do You Replace a Radiator Hose: 9 Steps

You can always choose to replace radiator hoses yourself. However, the job will take anywhere from 1-3 hours depending on how familiar you are with the car and with the work. In most cases, it’s a straightforward job.

However, in most cases, you’ll also have to remove accessories in order to access the hoses. That can be time consuming, and it may be a good idea to label parts as you put them back together.

This guide covers replacing the upper and lower radiator hoses.

In most cases, you can also replace heater lines by simply following the hoses from the lower radiator hose up further past the water pump.

In this case, you’ll want to remove the line from the water pump and from the heater. However, this may require moving the air intake or other parts.

How long do radiator hoses last?

Radiator hoses don’t have a set lifespan. However, they normally last at least 4-5 years or about 60,000 miles.

If you never change coolant, live in an environment with harsh weather, or have high salt content in local dirt, you might have to replace hoses more frequently.

How do I know if my radiator hoses are bad?

In most cases, the only way to tell if radiator hoses are bad is if they are physically damaged or if they are leaking.

Otherwise, there are no real “tells” that it’s time to replace the hose.

Can you drive with a leaking radiator hose?

It’s normally safe to drive with a leaking radiator hose, providing the coolant isn’t leaking onto anything in the engine.

However, it’s unsafe for wildlife and the environment, as radiator coolant is normally very toxic. Therefore, you should try to replace the radiator hose as quickly as possible.

Finally, if your radiator hose is leaking and you don’t top the coolant up often enough, your engine could overheat.

Can I temporarily fix a radiator hose?

You can temporarily patch a radiator hose with any waterproof patch material, such as a bike tire patch. Some people even use plastic and duct tape.

However, these fixes are very temporary, as these materials are not heat resistant enough to withstand engine temperatures for long. Eventually, they will start leaking again.

Therefore, this kind of fix should only be to get your car to a garage or to the store to buy new hoses.

Replacing radiator hoses at a garage will normally cost you $150-$350 depending on the scope of the job. Often, radiator hose replacement costs are mostly labor. That means you can save more than half of the cost by doing the work yourself. And, in most cases, it’s a fast and straightforward job.