Control arms are an integral part of your vehicle’s suspension system.

While most modern cars only have lower control arms, these A-shaped bars function to connect your suspension to the wheels.

That enables you to drive smoothly, with the control arm and suspension system to absorb the shocks and bumps of going over the road.

Unfortunately, everything has a lifespan. For your control arm, that can be indefinite.

However, the bushings connecting the control arm to the car and the wheelbase normally have a lifespan of 50,000-100,000+ miles.

Here, lifespan is completely dependent on road conditions. If you drive on gravel or bumpy roads, your control arm will wear out more quickly. And, if you’re in an accident, they could fail. 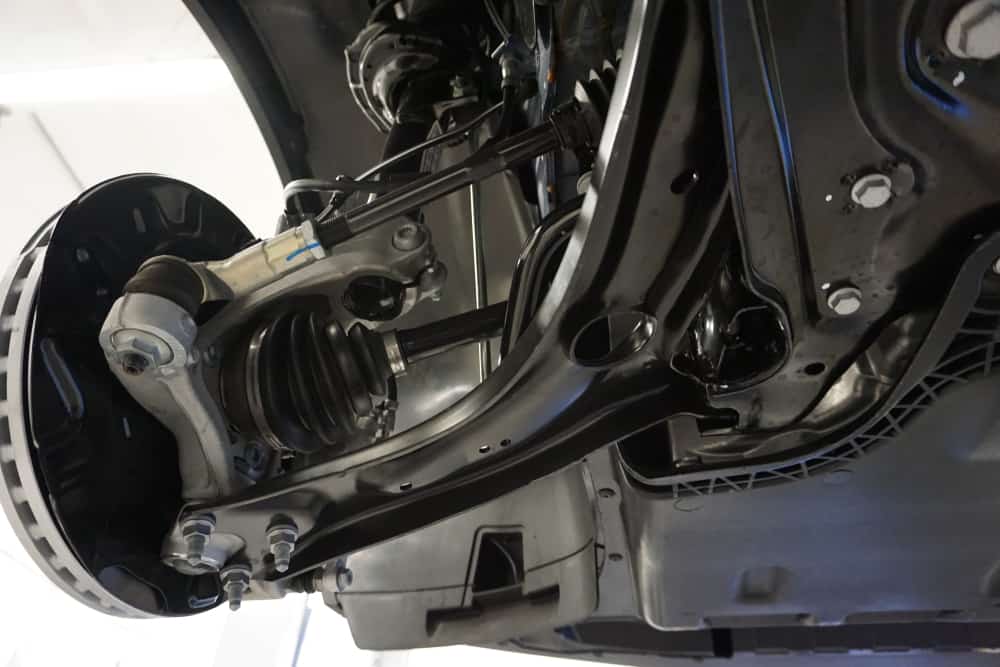 If that happens, replacing your control arm is relatively simple. In most cases, the lower control arm itself will cost you $50-$100. On average, you should also expect to pay twice to three times that in labor costs. Normally, that equates to 1-2 hours of work per control arm, at your mechanic’s hourly fee + garage fee. This makes the average cost for replacing control arm parts between $150 and $400.

In some cases, you might have to replace one or more of the bushings as well.

Depending on the vehicles make and model, that can cost anywhere from $50-$250+ per bushing.

These costs can also vary considerably by location. Why? Most mechanic costs are about average rates per hour in a region.

Plus, in areas with higher costs of living, rates will logically be higher. In addition, you can expect to pay more for some cars than for others.

For example, if you want a control arm replacement for a BMW, you’re normally looking at costs in excess of $200.

For example, many BMW owners upgrade to M3 control arms when the original goes out, because the upgrades don’t use fluid-filled bushings, meaning they last longer.

However, you are likely to pay at least $379 for an M3 control arm with bushings. And, most importantly, that doesn’t include installation costs.

How Much Does Control Arm Replacement Cost?*

For example, most modern vehicles use a MacPherson suspension system or MacPherson Strut. This means that you only have a lower control arm.

In other cases, you might have a double wishbone or Short Long Arms suspension. This is normally only common in select vehicles, because it takes longer and costs more to service.

In addition, with both an upper and lower control arm to replace, replacing the control arms is also more expensive. However, most modern vehicles don’t use it.

If you have a 3-8th generation Honda Accord, a Peugeot 401, or a Mazda6, it does have SLA suspension.

There are also other exceptions. However, you can easily check by looking under your car.

On average, you’ll normally pay between $40 and $150 for replacement lower control arms.

On the other hand, you can pay well over $300 for a replacement BMW control arm.

The chart below details estimated costs for 10 popular car models.

There are many factors that affect the cost of replacing a control arm.

However, the primary factors will always be labor, make and model of your vehicle, and geographical location.

Many control arms are interchangeable between vehicles. That’s because many vehicles use a basic MacPherson suspension system with few modifications.

This means that the control arms are interchangeable. It doesn’t matter if you’re buying a front control arm or a rear control arm, the system is cheap because it’s mass produced.

In other cases, vehicles use custom control arms. This always increases the cost.

While there are advantages, for example, slightly better or smoother suspension, it does mean the parts cost more.

So, you’ll always have to take the make and model of your car into account.

You can almost always buy upgraded or better control arms for your vehicle.

In fact, suspension upgrades are one of the easiest ways to improve your vehicle’s driving and steering performance.

That’s why control arms that fit a single vehicle can range from $20 to well over $700.

In most cases, you’ll pay an hourly mechanic’s fee + garage fees for having a control arm replaced.

In some cases, that means you’ll spend an average of $100 or more for installation costs alone.

In fact, in most cases, labor costs more than the replacement control arm. Here, you can expect to pay anywhere from $100-$250+ in labor fees.

Therefore, you should take your local mechanic’s fees into account when calculating potential costs.

Control arms attach the suspension system to the wheels.

This system, whether a MacPherson or a double wishbone, uses rubber bushings to transfer shock from going over bumps and jolts on the road to the suspension system.

There, it’s absorbed rather than transferred to the passenger cabin.

Suspension systems allow you to drive without experiencing every bump in the road.

And, control arms ensure that your wheels have a stable connection to the suspension to make that work.

What is the Replacement Process?

Replacing your vehicle’s control arms requires that you have a good lift or jack and that you’re able to take the vehicle to have the suspension balanced afterwards.

How to Replace Your Lower Control Arm

Check the wheel to see if it clunks or makes noise.

Then take a small test drive in the parking lot to test the suspension.

Chances are, you may need to have the suspension re-balanced.

4 Symptoms of a Bad Control Arm

If your control arm is having issues, you should notice very quickly.

In almost every case, it makes noise, causes steering issues, or results in excessive vibration in the vehicle.

While there are many symptoms of a bad control arm, the following four are the most common.

1. Weird Noises When Steering or Starting Up

If your vehicle is squealing, popping, or clunking when you steer or first start up the car, it might be a control arm issue.

This is especially true if you hear popping noises when you speed or slow down.

Or, if you can get out of the vehicle and shake the tire to hear it clunk.

These noises might indicate a worn ball joint or worn bushings.

However, they can come from other issues, so if you can’t move the control arm or tire manually to verify where the noise is coming from, consider taking the car to a mechanic.

In fact, it might just mean you have to take your vehicle in for alignment.

On the other hand, it can be a sign of a bad control arm. That’s especially true if you’re getting other symptoms as well.

If your vehicle is vibrating excessively when driving, slowing down, or speeding up, it might be a control arm issue.

However, like uneven tire wear, this symptom can stem from most places in the suspension.

You’ll want to physically check to see if the control arm is fine or not.

Unstable steering is one of the most common and most dangerous symptoms of failing control arms.

Here, your vehicle is likely to veer to the left or to the right when you go over bumps.

That, combined with vibration, can make driving extremely difficult.

If you still have questions about your control arm, these questions and answers should help.

Can I drive with a bad control arm?

Yes. However, you shouldn’t.

It’s okay to drive your vehicle to the garage. However, you shouldn’t drive long distances or keep using your vehicle as normal.

Why? The longer you drive on a bad control arm, the worse the problem gets.

Veering issues can also get stronger and worse.

In addition, if the control arm fully breaks, you’ll be stuck unable to drive your car.

The best option is always to fix the issue as quickly as possible.

Can I replace just one control arm?

You can. However, it’s not always recommended.

For example, in most cases, the issues that cause one control arm to go bad affect both.

These normally include driving on rough roads, being in car accidents, or hitting bumps and speed bumps.

These issues affect both control arms. Therefore, replacing both at once can save you from repeating the costs in the near future.

And, because part of labor costs almost always include a garage fee, it’s less expensive to have both control arms replaced at once than to do each separately.

Do I need a wheel alignment after replacing lower control arm?

It’s always a good idea to have your wheels and suspension aligned after replacing the lower control arm.

However, this alignment ensures your vehicle is balanced and will not veer when you steer or go over bumps.

In most cases, the only thing that causes damage to the control arm is shock.

In some cases, it might also be simple old age. For example, the rubber bushings on your control arm might simply get old and brittle.

Replacing the control arms in your vehicle is normally easy. In most cases, the cost of changing your control arm is also between $150 and $350 with parts and labor.

However, it’s also a good idea to have your vehicle balanced afterwards, which will cost you extra.

Good luck with your suspension fix.