If your car keeps overheating, it might be because the radiator fan is broken. This fan functions to move heat away from the radiator, so vehicle coolant loses heat.

When the fan goes out, your radiator could collect too much heat, meaning the coolant doesn’t cool down enough. Then, your vehicle eventually overheats. 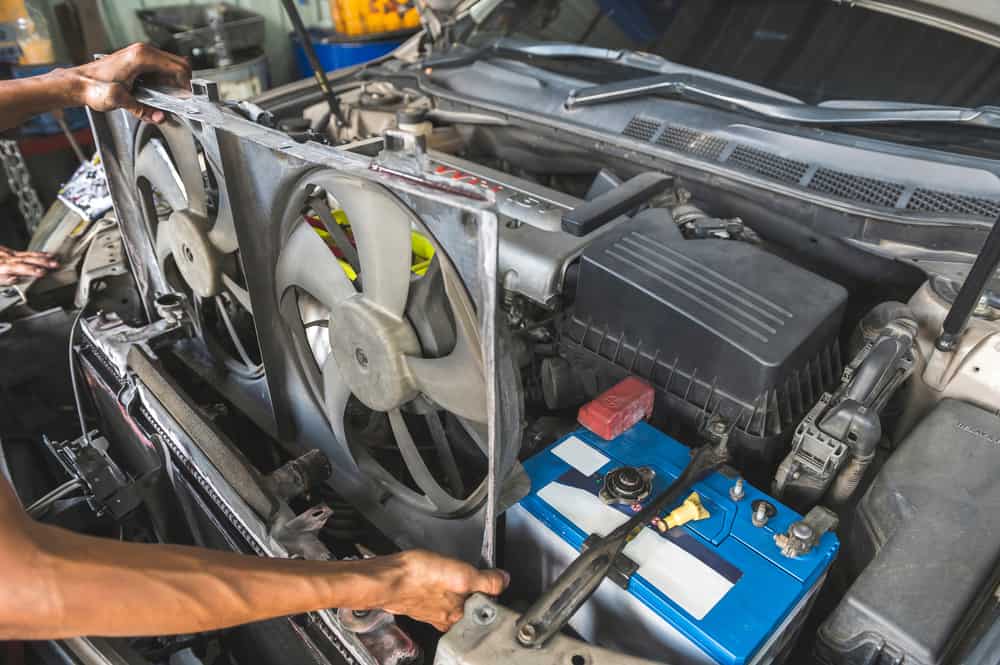 Therefore, the amount you’ll pay will significantly change depending on which brand of car you have.

For example, the following chart shows cost estimates for changing the radiator fan in several popular makes and models of vehicles.

In most cases, the largest cost associated with replacing a radiator fan is the cost of the parts.

Here, the make and model of your vehicle is most likely the largest cost factor. However, other factors, like which parts you choose, parts around the fan, and teardown time for your engine also matter.

The following includes the most relevant price factors for replacing your radiator fan.

The make and model of your vehicle significantly impact the cost of replacing a radiator fan in several ways.

For example, different brands charge different amounts for their parts. An Original Equipment Manufacturer Hummer radiator coolant fan will cost around $90 new. On the other hand, you can expect to pay around $250 for the same OEM part from Honda or Ford.

Pricing also depends on the rate of manufacture. Motor vehicle manufacturers with just a few vehicles will often invest more into mass-producing a few parts.

Brands like Honda and Nissan optimize for making parts for a wider range of vehicles, so they make less of each. Therefore, you pay more.

That same process also impacts how much parts cost locally.

For example, you can expect to pay more for parts if your vehicle is rare or not common in your area. That’s because your mechanic will have to go through more trouble to get the part or you’ll have to custom order it.

If you have an older vehicle, you’re likely to need a mechanical radiator fan. These include a clutch that opens and closes the fan based on the temperature of the engine.

Electric fans are normally cheaper to replace. However, they use sensors to determine when to turn the fan on or off.

If a sensor goes out, you can always replace one sensor rather than the full system. However, more things can go wrong, as the relays, the sensors, and the wiring can all fail.

You can almost always save money by choosing a secondhand or remanufactured radiator fan. However, these won’t always be available for your vehicle.

Made-to-fit parts can also cost significantly less than OEM. These are parts made by a third party, to fit a specific vehicle or range of vehicles.

Here, the manufacturer makes them to fit as many vehicles as possible to reduce costs – meaning the fit might not be as good as the original part.

Finally, you can also choose universal parts. These don’t always work with every engine, because depth is often an issue.

Some radiator fans have to be extremely thin to fit into place. In other vehicles, this is less of a concern, and you can install almost anything.

In this case, a universal fan may be a good way to save money if you’re on a budget.

Another consideration is that some radiator fans can be installed in less than an hour. In other cases, you might have to move sensors, the water line, or even the water pump to get the fan in.

That might mean a simple repair can take several hours. However, on average, you can expect your mechanic to spend 1-2 hours on the job.

Here, most reputable mechanics will charge somewhere between $30 and $205 an hour. In some cases, you might find rates as low as $15. On average, you should expect about $60 from most.

However, if you go to a chain shop like Pep Boys or Midas, you can expect rates to start around $95 per hour. Plus, you’ll have to pay a shop fee, which is usually 5-20% of the total bill.

4 Signs of a Bad Radiator Fan (How Do You Know?)

If your radiator fan is going out, chances are you’ll hear it before anything else. However, if the motor or the wiring simply burns out, that might not be the case at all.

Instead, you can look for any of these 4 signs of a bad radiator fan. And, of course, you can always physically inspect the radiator with the vehicle running to see if the fan is actually coming on.

Noises from the Fan

If you hear scraping, grinding, or a loud whirring noise from the fan, it’s a good sign that you should have it replaced.

However, you can start by inspecting the mechanism and the housing, with the fan off, to ensure nothing is stuck or caught.

You can also try greasing the fan rotor. However, that’s unlikely to actually help.

While there’s a small chance that noises are coming from debris or something stuck in the housing, it’s more likely that the bearings are worn out.

In other cases, it might actually mean the radiator fan housing is broken and something is scraping or interfering with the fan.

If your vehicle is overheating, the coolant keeps running low, or you keep getting an overheating light, you might have a radiator fan issue. The hotter your vehicle runs, the more quickly fluid will evaporate off.

In addition, if fluid is hotter than usual, it’s more likely to convert to steam, meaning you’ll have to fill the fluid more often. Of course, if you have to keep refilling coolant, you’ll want to check for leaks as well.

If you do so and you keep having issues, the engine keeps getting hot, or you keep actually overheating, the fan may be the culprit.

However, this could stem from many other issues, so you’ll want to inspect the fan and the electronics before making assumptions.

If your radiator fan fuse keeps blowing, it’s a good sign that something has gone bad with the wiring, the relay, or the radiator fan motor.

The good news is you can often get away with replacing just the part that’s broken. You might not have to replace the full housing.

However, if you don’t know where the issue is coming from and can’t isolate it, replacing the full fan is a good call.

If the AC stops working as efficiently, it might mean that the coolant is entering the air conditioning at a higher temperature than it should be.

How Do You Replace a Radiator Fan? (8 Steps)

Replacing the radiator fan on your car yourself can save you a lot of money.

For example, not only will you save the 1-2 hours of labor to put the part in, you can use refurbished, secondhand, or aftermarket parts your mechanic might not want to use.

In most cases, replacing the radiator fan is also relatively straightforward and you’ll only need a simple toolkit to do the work.

It’s always a good idea to start out replacing your fan by taking safety precautions. That means parking your car, turning the engine off, and taking the key out of the ignition.

This step is important because most vehicles automatically lock the doors and windows when the power is cut so you’ll need the key later.

Then, unplug the battery from the negative post and tuck it up out of the way. This will prevent you from being shocked or from shorting anything out while working with the wiring for the fan.

From there, you can always turn the engine back on and test that the fan is working. Try driving around to make sure that the fan kicks in.

You’ll also want to double-check coolant levels to ensure you have enough.

If you still have questions about replacing a coolant fan, these answers should help.

Can you drive with a bad radiator fan?

You should not drive with a bad radiator fan. However, you can drive slowly to the mechanic.

If your car doesn’t have a working radiator fan, it will overheat. That can cause damage to other parts of the engine.

E.g., the pump can burn out, you can develop leaks from excess pressure from steam, and your engine will likely shut down.

The slower you drive and the more you take brakes, the more feasible it is to drive without one. However, it should never be a thing long-term.

Will my car overheat without a radiator fan?

Yes. If heat isn’t moved away from the radiator, the radiator will not cool the engine enough to make a difference.

Therefore, the car will overheat.

How long does it take to replace a radiator fan?

Usually, you can take out and replace a radiator fan in a matter of 1-2 hours. On average, you should estimate around an hour.

However, some newer vehicles or smaller cars have less space and will require taking out more parts to access the fan. Therefore, it might take longer.

How long does a radiator fan last?

Your radiator fan should last the lifetime of the vehicle. If it doesn’t, something has gone wrong.

How often do radiator fans need to be replaced?

Normally, you shouldn’t ever have to replace your radiator fan.

There’s no planned maintenance period for them.

If you’re having issues with your radiator fan, it’s important to check if the issue is the fan, the motor, or something cheaper to replace like a sensor or the relay.

If you do it yourself with aftermarket parts, that could drop as low as $70.

However, you always want to make sure you choose quality parts that will last the lifetime of the vehicle.