If you’re hearing loud noises coming from the driveshaft, keep losing power, or your vehicle’s body isn’t moving in line with the front wheels, the U-joint is a likely cause.

Unfortunately, universal joints do wear out. When they do, replacing them quickly is important for preventing worse damage to your transmission. 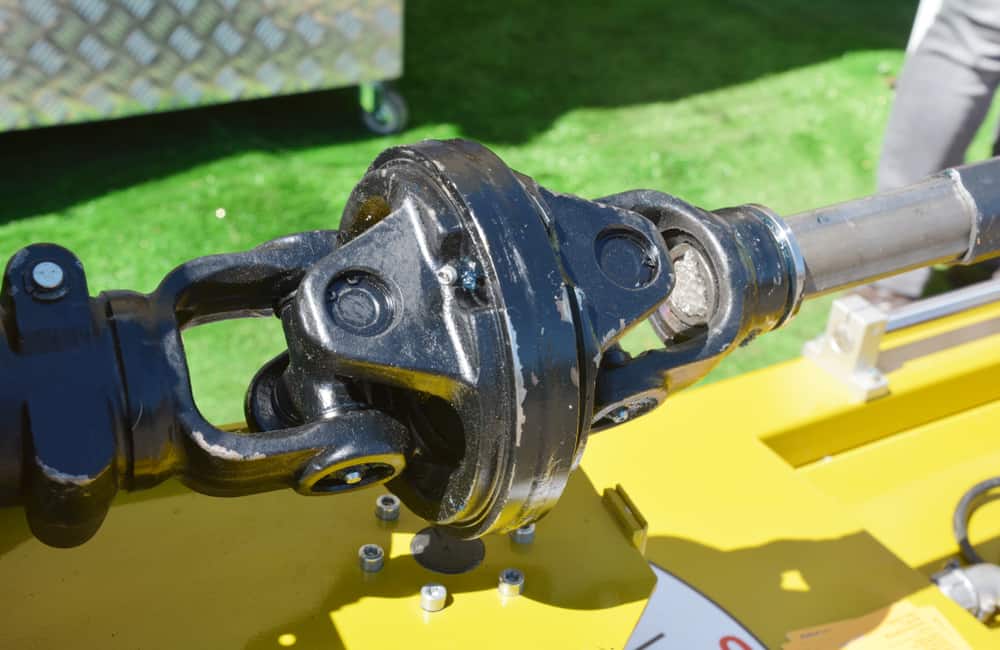 Here, the average cost of replacing a U-joint is around $250. That ranges from $200-$300 depending on the make and model and where you live. Here, about $30-$150 of costs are parts and the rest is labor. However, if you have a rear-wheel-drive truck, you likely have 2 or even 3 rear U-joints, which can increase costs to about $350.

The table below shows a quick price comparison of U-joint replacement cost estimates from reputable suppliers:

In most cases, labor is the largest cost factor in replacing a U-joint. That’s because you have to disconnect the driveshaft from the transmission, which can take some time.

It can also be difficult to do without a lift, although a truck U-joint is relatively easier to replace than one in a car, although you’re more likely to have to replace more than one U-joint.

Therefore, the cost to replace U-joints heavily depends on the make and model of the vehicle and how many U-joints it has. In addition, front axle U-joints are almost always more expensive to replace than rear-axle U-joints.

However, costs vary significantly based on the vehicle you drive, the number of U-joints, and the cost of parts.

The following price factors will be the most significant when replacing your U-joint.

Your vehicle’s make and model determine ease of access, part cost, and even part availability. This means it impacts the cost of your replacement in multiple ways.

For example, if you’re driving a less common car, you can expect to pay more for the parts because they are harder to get. You’ll also pay more for labor because the mechanic might not know exactly how to do the work.

However, the cost of OEM parts is also a major factor. E.g., the OEM parts for some vehicles can go into the range of several hundred dollars if you want to replace both bearings.

On average, you can expect an OEM U-joint to cost around $150-$180 new and that doesn’t change too much across most vehicles.

Different vehicles have a different number of universal joints. For example, most cars only have one. On the other hand, most pickups will have 2 or even 3. A semi will have 3 to 5.

Additionally, the more U-joints your vehicle has, the more stress is placed on each, so the more likely they are to fail. That means people with rear-wheel drive vehicles are more likely to have issues with U-joints.

Additionally, most U-joints are placed in the middle of the vehicle or directly under the cabin – connecting the transmission to the drive shaft.

In a pickup, you could have a front axle U-joint and a U-joint on each side of the drive shaft or even one in the middle.

These joints allow the body of the car to move without breaking the drive shaft. They also account for the difference in height between the axle and the transmission.

You can always save money on a universal joint by choosing an aftermarket part. Here, you can choose made to fit, meaning the part has been manufactured to fit that vehicle.

You can also choose “universal” fit, meaning the part is designed to fit into almost any vehicle. Here, it’s important to check if you have a U-shaped joint or an X-shaped joint before making a purchase because there are differences.

Finally, you can choose secondhand or remanufactured parts to save money.

Most U-joints are cheap enough that this won’t be a huge concern, but you can drop the price to a tenth of the cost of a new and OEM part.

E.g., all of the parts on the low end of the price scale in the chart above are aftermarket or remanufactured parts.

Your mechanic’s rate is likely to be the most important factor in the cost of replacing your U-joints. That’s because it takes 1-2 hours to replace the joints.

Of course, that can vary significantly. Big chains like Valvoline, Pep Boys, and Firestones average around $100 an hour but can go up to $200+.

On the other hand, “cheap” places will charge as little as $15 per hour but might not have the insurance to cover your car if something goes wrong.

5 Symptoms of a Bad Universal Joint

If your U-joints are going out, you’ll probably hear them before you notice anything else.

However, you might notice other symptoms, like a leaking transmission, high vehicle tremor or vibration, or even your vehicle refusing to move can all be symptoms.

1. Noises from the Drive Shaft

If your drive shaft is squealing, squeaking, or clunking, it’s very likely to be a U-joint issue.

Here, one of the easiest ways to test a manual car is to hold your foot on the brake, shift the car into reverse and then shift into drive. If the vehicle clunks, it means there’s too much play in the U-joint. Other issues can be harder to test for.

However, squeaking noises usually mean the bearings in the U-joints are failing. Clunking noises normally mean the joint has too much play in it. You’ll hear both when driving at low speed and when shifting gears.

If your U-joint has a lot of play in it, the drive shaft could start to shake. This can cause a tremor or vibration in the car.

Importantly, no matter what’s causing the issue, it’s also a major sign to go to the mechanic right away. Prolonged vibration can cause significant transmission damage and could result in having to replace the transmission.

A vibrating drive shaft will eventually cause seal leaks in the transmission. This means you’ll start to see fluid leaks.

Here, you will have to replace the seal (at minimum) rather than simply replacing the U-joint. In addition, this symptom could just be a sign that your transmission’s rear seal is damaged.

If your vehicle is losing power or won’t drive at all, it could actually be a U-joint issue. That’s because the drive shaft isn’t turning or can’t.

Here, your vehicle might simply refuse to drive. Or, you might lose power or stop while driving. Both can also relate to other issues so you do want a diagnostics check before replacing parts.

If your drive shaft comes loose, the U-joints, which connect it to the transmission, are a very likely culprit. However, this could also relate to many other problems.

In addition, you’ll almost certainly have to replace the driveshaft as well as the U-joints if this happens. You can also test this before the drive shaft actually comes out.

If you can move the drive shaft with your hands, it has too much play in it and you’ll have to replace the U-joint.

How To Change a Universal Joint (7 Steps)

If you want to change the universal joint(s) yourself, you can do so to save a significant amount of the cost of labor.

However, you will need a U-joint removal tool. You can buy these for $15-$70 on Amazon or at most Autoparts stores.

You might also be able to rent or borrow one from your local mechanic, however, it’s unlikely.

With that in mind, you can prepare by buying the tool.

You can get started replacing your U-joint by parking your vehicle on a clean and level place. Remember, you’ll be under the vehicle most of the time.

You’ll also want to jack up the back of the vehicle and stabilize it with jack stands under the axle. You want one on each side.

If you’re removing a front axle U-joint, you should jack up the front.

If you have a pickup or a four-wheel-drive vehicle, you’ll have more ball joints. However, the process is exactly the same.

You’ll take the drive shaft out, use a screwdriver and pliers or a hammer to remove the pins, then use a hammer and the universal joint removal tool to remove all four caps from the U-joint.

Put the new one into place and replace the caps, then put the pins back. That’s it.

If you’re still wondering what’s involved with replacing a U-joint, this FAQ should help.

Can you drive with bad U-joints?

It is not safe to drive with bad U-joints. Why not? Your vehicle’s power could fail at any time.

In addition, you could actually lose the drive shaft. However, the largest danger is that your U-joint will damage the transmission, which can cost thousands to actually repair.

What happens when U-joint fails?

In most cases, you’ll hear noises from the drive shaft.

Depending on whether the joint is worn down, has play, or is actually broken, you’ll get different symptoms. However, noises, loss of power, a loose drive shaft, and leaking transmission oil are all common.

How long does it take to replace universal joints?

In most cases, it takes 1-2 hours to replace a U-joint in a car. If you have to replace more than one joint, you should add about 20 minutes per joint.

If the joints are very old or you don’t know what you’re doing, it may take longer. Most mechanics will bill 1-2 hours for the work.

Not always. U-joints connect the drive shaft to the rear axle and to the transmission.

If you have a front-wheel drive vehicle, it may have four CV joints instead. E.g., if you have a half-shaft axle system, you might not have U-joints.

On the other hand, some front-wheel drive vehicles do have U-joints. E.g., some GT40s.

Will a stiff U-joint cause vibration?

A stiff U-joint should not cause vibration.

If you still have vibration, you likely have another issue, such as the bolts being loose or an issue with the drive train or the transaxle.

Replacing one or more U-joints in a car will usually cost you about $250 although it can be more. If you do the work yourself, you can drop that down to less than $50, if you buy aftermarket parts.

In addition, you may have to replace more than one U-joint, and it’s sometimes a good idea to change all U-joints at once.