If your oil pan is cracked, punctured, or otherwise leaking, replacing it is sometimes the best option.

Often, the only way you’ll notice damage to the oil pan is because of leaks, losing oil, or when inspecting under the car.

Whatever the reason, the pan can take some time to replace. 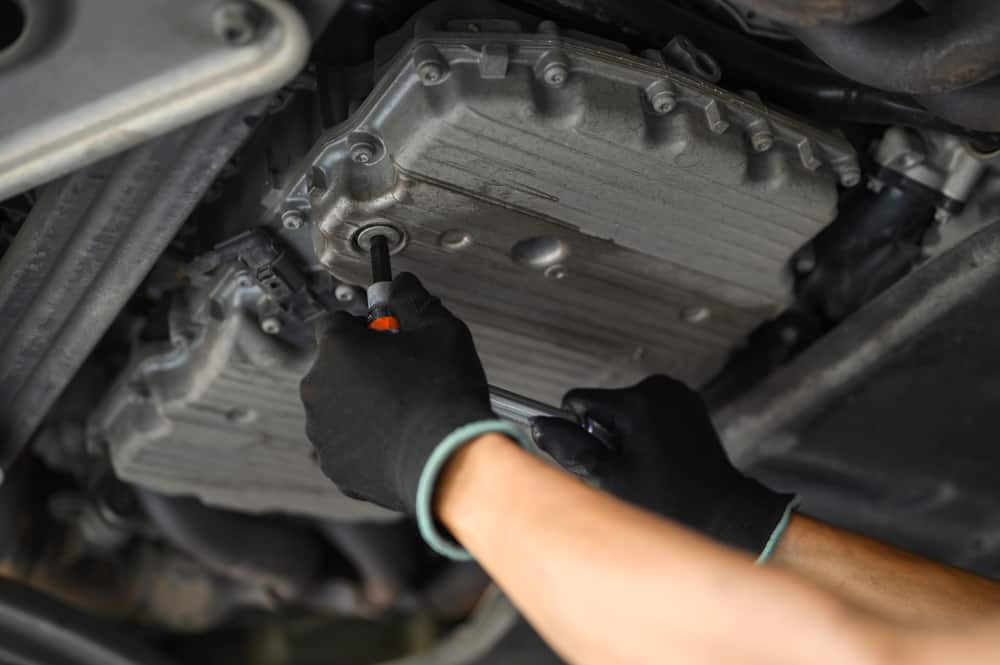 However, the average cost of replacing an oil pan can range from $100 to well over $1200 depending on your vehicle. Here, the largest factor is the cost of the pan, which might range from $50-$1,000. Labor costs, which normally include 1-3 hours of work can also be significant.

How Much Does Oil Pan Replacement Cost?*

The cost of replacing an oil pan will vary significantly depending on the make and model of your vehicle.

Here, the largest factors are the cost of the part, which can range from about $20 to well over $2,000, and the labor involved in making the repair.

For example, in some engines, the oil pan is fitted under the sub frame of the vehicle. Luckily, in most cases, you’re looking at about 1-3 hours of work.

The following chart offers estimates for replacing the oil pan on popular vehicles.

If you’re replacing an oil pan, the cost can vary significantly.

That’s important because it often means you’ll have to check your vehicle, local labor costs, and the specific part you’re replacing before you have any idea what the repair will cost.

The following price factors will most likely come into play in pricing the work.

Labor can be the most expensive part of replacing your oil pan. However, it’s likely to be around half the cost.

Unfortunately, replacing an oil pan is a dirty job. The vehicle has to be lifted or suspended on jacks. Then, you have to drain the oil. From there, you can take the oil pan off.

It also depends on the make and model of your vehicle; that might be very easy or very difficult. You’ll often have to remove parts to fully take the oil pan off.

For example, in some vehicles, you actually have to disassemble the subframe of the vehicle to get the pan out. That can take several hours.

For this reason, you might pay over $1,000 in labor. Luckily, you’re more likely to pay around $250 in labor. That usually works out to 2-3 hours of your mechanic’s time plus shop fees.

Oil pans range significantly in price. Here, the largest factor is in the brand.

In addition, you can always buy aftermarket and made-to-fit parts. These might be made of different materials or simply mass manufactured. However, they often cost between $60 and $200.

Universal parts, or those intended to fit as many vehicles as possible, sometimes start as low as $20.

Here, it’s important to pay attention to materials and fit. For example, many oil pans are made of plastic. These might be less durable than an OEM made of aluminum or another metal.

However, you can always match the material of your original oil pan because many OEM parts are made of plastic as well.

On the other hand, if you’re not sure how long your vehicle will last, going for a cheaper alternative can be a good way to save money.

Sometimes if your oil pan is going bad, you’ll have to replace other parts. These might include the oil plug, the oil plug gasket, the oil pan gasket, and definitely the new engine oil.

Here, your replacement oil pan may include the new plugs and gaskets. However, you’ll always have to pay for new oil. This can cost anywhere from $20-$100+ depending on the brand and type of oil you choose.

3 Symptoms of a Bad Oil Pan

Normally, the only reason you’d ever have to replace an oil pan is if it is physically damaged. This damage should be visible in an inspection.

If you don’t have visible damage to the oil pan, chances are, the damage is to the gasket, the plug, or the plug gasket. In this case, changing those parts is much cheaper and more effective.

However, there are a few exceptions in which it is better to replace the pan, even if you don’t have physical damage to it.

If your engine is leaking oil, you’ll likely notice it very quickly. Here, an oil pan leak is very likely to result in puddles or drips under the car.

You might have smoking oil from the engine but it’s highly unlikely from an oil pan issue. If oil is getting into the engine and smoking off, it’s much more likely to be a gasket issue.

On the other hand, if oil is leaking from the bottom of the pan but is not on top of the pan, the issue is likely a crack, puncture, or a stripped oil pan plug. That’s a quick and easy way to determine if the issue is a gasket or another problem.

Normally, you’ll notice oil leaks because your check engine leak comes on, you keep having to refill the oil, or you notice puddles under the car.

However, a leak has to be quite bad before most of us notice puddles, so if you do see them, you’ll want to make sure that you follow up with an inspection and quickly, because an unattended leak can ruin the engine.

If your engine oil leak is coming from the drain plug, it’s a good idea to drain the oil and try to reinsert the plug. Sometimes you won’t be able to fix the issue. In this case, the threads the plug screws into might be stripped or damaged.

In this case, they might not create enough of a seal with the plug to prevent oil from leaking. If this happens, you’ll want to change the pan.

However, it’s important to double-check that the damage isn’t to the plug or the gasket first. In addition, you might be able to get away with simply cleaning threads.

If you really can’t fix the issue in one of those ways, you’ll have to replace the oil pan.

3. Visible Damage to the Pan

This means that the most likely cause of an oil pan issue is an accident. Therefore, you can physically inspect the oil pan to determine if there is damage.

Here, you want to look for punctures, cracks, rips, or dents that could impede the pan’s function. If you see oil leaking, the issue is definitely worth replacing.

You’ll also want to look at whether a metal pan still seals properly. If the lip is bent or damaged, it might not properly seal anymore. That could cause major problems further down the road.

Therefore, if you are in doubt, it’s always a good idea to have the pan inspected by a mechanic. If they think you should replace it, it’s probably for a reason.

How To Replace an Oil Pan in 8 Steps

If you want to replace the oil pan on your car, you can choose to do so yourself. However, it may be worthwhile to assess if you can take the pan out without taking apart the subframe.

Here, you can check under the engine and look at the edges of the pan. If the pan is under the frame and cannot be pulled out in one direction or another, the subframe will have to come apart.

If so, you’ll likely want a lift rather than jacks to the job. Otherwise, you can do the work yourself.

The first step to replacing your oil pan is assessing the pan. First, check if it runs under the front of the subframe. You may have to take this out.

In some cases, you’ll also have to take out the motor to take the oil pan out. In this case, you’ll want to get an extra jack.

You can take the motor out by undoing the motor mounts in the engine and lowering it onto jacks. However, this can be dangerous and it can be extremely difficult to get the motor back into place if you don’t exercise enough caution.

This guide assumes you don’t have this issue.

In most cases, you can expect this full process to take 2-4 hours, depending on whether or not you have to take the subframe out.

If you do have to take the subframe out, it’s likely only the front subframe and you’ll likely only have to move it enough out of the way to get the bolts out.

Additionally, if your oil pan mounting bolts have broken off, you should get the broken pieces out. Here, you can use a magnet. Otherwise, your new pan won’t go on well enough.

Finally, if you’re buying a new oil pan plug that didn’t come with the pan, make sure it’s the right size. Using an oversized plug is the fastest way to strip the existing plug threads, which is a major reason to have to replace the pan.

Replacing a bad oil pan usually takes 2-3 hours of time, which can be expensive.

However, you can also choose to do the work yourself to save money.