When a motor or engine mount starts to go bad, you’ll start noticing issues with vibration, shaking, clunking, and even hard starts.

That happens because the shock-absorbing mounts holding the motor in place are starting to wear out.

They might have too much play or be loose, allowing the engine to move around. 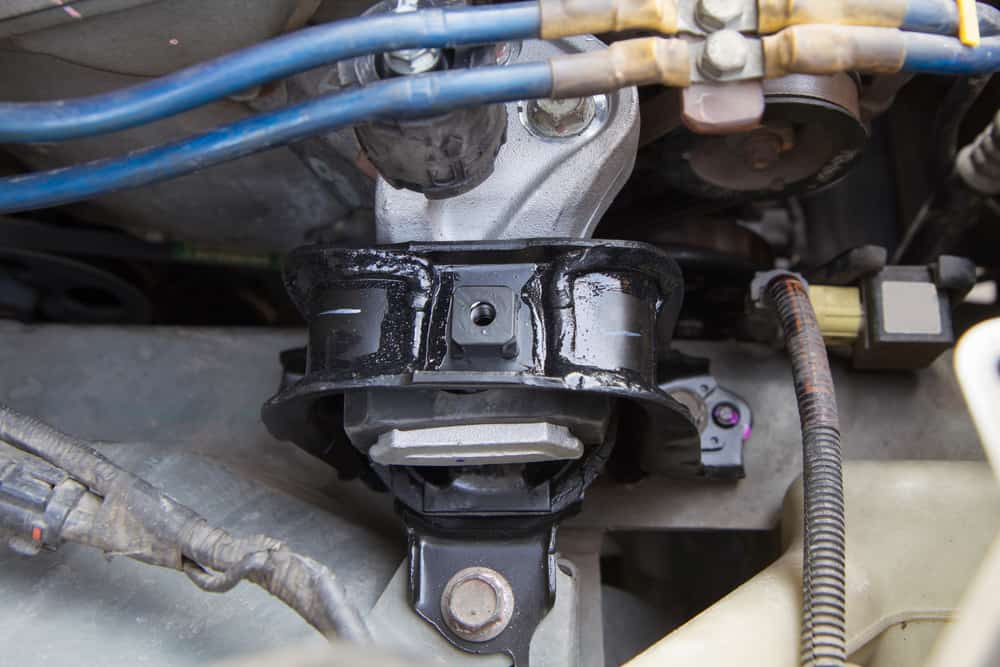 Unfortunately, the average cost of replacing a motor mount ranges between about $250 and $500+. That’s because some mounts are significantly difficult to get to. And, the parts cost around $50-$350 per. The rest is labor.

How Much Does Motor Mount Replacement Cost?*

In most cases, the cost of replacing an engine mount significantly depends on factors like the location of the mount, the make and model of the car, and the parts you’re buying.

This means that the cost of replacing a motor mount can vary significantly from job to job, even in the same car.

The following include average rates for replacing a motor mount in popular vehicles:

The cost of replacing a motor mount can vary significantly depending on price factors like the part, the location in the motor, the make and model of the vehicle, and even how many mounts you replace at once.

The following price factors impact those costs, which can allow you to get an idea of how much your replacement part will cost.

In some cars, especially newer vehicles, accessing the motor mounts can be a significant amount of work.

For example, in many newer vehicles, you’ll have to pull off the throttle body and the intake manifold to access the rear engine mount. For instance, if you have to jack the engine up to access the mounts.

In addition, you might want to replace more than one mount. After all, most of your engine mounts are usually about the same age.

Most vehicles have a rear, front, side, and transmission mount. It’s extremely unlikely you’d have to replace all of them at once. However, the location of the mount significantly impacts the required amount of work replacing them.

For example, you can normally replace the side and front motor mounts in 20-60 minutes. You’ll likely have to remove a few parts, but you won’t have to take anything else out.

In many older cars or in vehicles with smaller engines or larger bodies, you’ll also be able to access and remove the rear mount in about an hour. In some vehicles, you can expect that to go up to 2-4 hours.

The make and model of your vehicle impact the costs in several ways. For example, the cost of parts can change significantly from vehicle to vehicle.

Popular vehicles like Ford and Chevy almost always have cheap parts available. These include both OEM and aftermarket parts. Others, like Mercedes, will be more difficult to find for cheap.

You can also almost always save money on the parts by choosing made-to-fit or even remanufactured parts.

A remanufactured engine mount is one that has been remade to meet or exceed the original specifications, which normally means it costs about one-third of the cost of a new mount.

In addition, the make and model of your car will impact your mechanic’s quote.

For example, if they’re familiar with the car and know how much work it will be to access the mounts, they know what to quote you. If they don’t, then they’re likely to offer a higher quote so they have room for things to go wrong.

Your mechanic’s hourly rate is likely to be the most significant cost in replacing your motor mounts. However, that’s not necessarily true.

E.g., with some vehicles, you’ll pay for an hour of work and the mount itself might cost $200+. However, the average motor mount costs around $50-$150 and requires 1-4 hours of labor to replace. So, your mechanic’s rate is a significant cost factor.

If you live in a rural area or there’s a lot of competition, that might go as low as $15 per hour. However, that’s unlikely. At the same time, you’ll usually pay something like $150-$250 for labor costs.

Of course, if you’re planning to do the work yourself, you won’t have to factor this in.

Just keep in mind that you might not be able to access the rear or transmission mount without dropping or jacking up the engine – which can be difficult to do on your own.

5 Symptoms of a Bad Motor Mount

The symptoms of a bad engine mount can be difficult to tell apart from other problems.

Here, the largest issue is often that the engine is loose, which causes other parts to misalign, wobble, or even break.

So, you’ll notice things going wrong with your engine at a higher rate than usual.

Engine wobble is the easiest way to diagnose a broken engine mount. Here, you’ll likely notice that your car is vibrating a lot.

Here, you’ll usually feel the vibration through the bottom of the car. That’s because a broken engine mount is less good at absorbing shock.

More of the vibration from the engine will travel through it, which means your vehicle vibrates. That happens when the shocks on the mounts first start to wear down, if the mount is damaged, or if the rubber starts to stiffen and crack.

If your engine mounts are wearing down, you’ll start to hear the engine more. Usually, that will mean jolts, clunks, and bangs as the engine impacts with other parts.

That can cause significant damage to your engine, including broken parts, broken belts, and dented parts. If your car is physically jolting, especially when changing gears, it’s also a good sign that the issue is the engine is loose.

If your front end keeps misaligning, it may mean the weight in your car is no longer balanced. Dynamic balancing is used to ensure weight is evenly balanced throughout the frame and the suspension, so everything stays in place.

If the engine shifts about, it could throw other parts of the car out of alignment. This could mean you frequently have to have your car rebalanced.

It could also mean your car appears out of alignment, even though it’s just been checked. E.g., one side of the car might be riding higher because the engine is shifted that way.

Damage to the engine can mean anything. However, consistent and new damage to parts, broken belts, broken hoses, or a dented radiator on the inside can mean bad news for your motor mounts.

Here, the issue could relate to many other things. It’s important to check and have your vehicle inspected. However, if your engine is moving around, it will cause this kind of damage.

And, if you keep having these kinds of issues, checking up on the engine mounts before replacing your belts and fans could save you a lot of money.

It’s always a good idea to physically inspect the motor mounts for damage. If they’re cracked, the rubber is cracked or broken or missing, or misshapen, it’s a very good sign to replace them.

Here, you’ll want to use a flashlight to look for corrosion, cracks, or flaking, all of which could indicate the mounts are failing. And, if you have several people to help, you can also try moving the engine.

If it knocks back and forth, a mount is loose. However, engines weigh 350-1000+ lbs. and you shouldn’t try to do this on your own as you can hurt yourself.

Alternatively, you can try seeing if there’s play in the mount itself, but this is also difficult to do because the weight of the engine might hold it in place.

Changing A Motor Mount in 6 Steps

If you want to change a motor mount, you can normally do so yourself to greatly reduce the cost of the replacement.

Here, it’s important to note that vehicles have many different layouts. For most cars, the front and side motor mounts are the first to go out. They’re also the easiest to replace yourself.

It’s always a good idea to follow basic safety protocols when working on your car. This means parking your vehicle on a flat and level space. You’ll also want to chock the back wheels or set the parking brake.

Finally, you may want to unplug the battery from the negative post. However, if you do, you’ll want to ensure that you remove the key from the ignition because most vehicles lock the doors and windows when the power is cut.

If you still have questions about replacing your motor mounts, these answers should help.

Can you drive with bad motor mounts?

It’s usually a bad idea to drive with bad motor mounts because it can damage the engine.

If your engine knocks around, it could cause thousands of dollars in damage to your timing belts. In addition, a misaligned engine could result in a seized engine, and replacing it will also cost thousands.

Are motor mounts worth replacing?

Often, you can have all 3-4 motor mounts replaced for anywhere from $800-$2,000. That’s usually more affordable than buying a new car.

However, it’s unlikely you’d have to replace all of them. On the other hand, motor mounts usually only go out after significant wear and tear.

If your car is 10+ years old, you might want to assess its potential lifespan before paying for the repair.

How long does it take to replace one motor mount?

The front and side motor mounts can usually be replaced in 20-60 minutes.

On the other hand, you can expect to spend 1-4 hours replacing the rear motor mount or the transmission mount. In addition, some cars are more complex than others.

How long should engine mount last?

Motor mounts are designed to last the lifetime of the car.

If they’ve gone out, it’s because something is wrong, you drive in rough conditions, or because the car is old.

However, you’ll often have to replace more than one mount at once. Therefore, you should plan to inspect all of the motor mounts before deciding on the work.