If your catalytic converter has gone bad, it’s been stolen, or you’ve lost it following a loose muffler, you’re probably looking at an expensive repair.

For many vehicles, that means your car is old enough to maybe warrant replacing itself. Therefore, it may be a good idea to assess if your car is worth the repair. 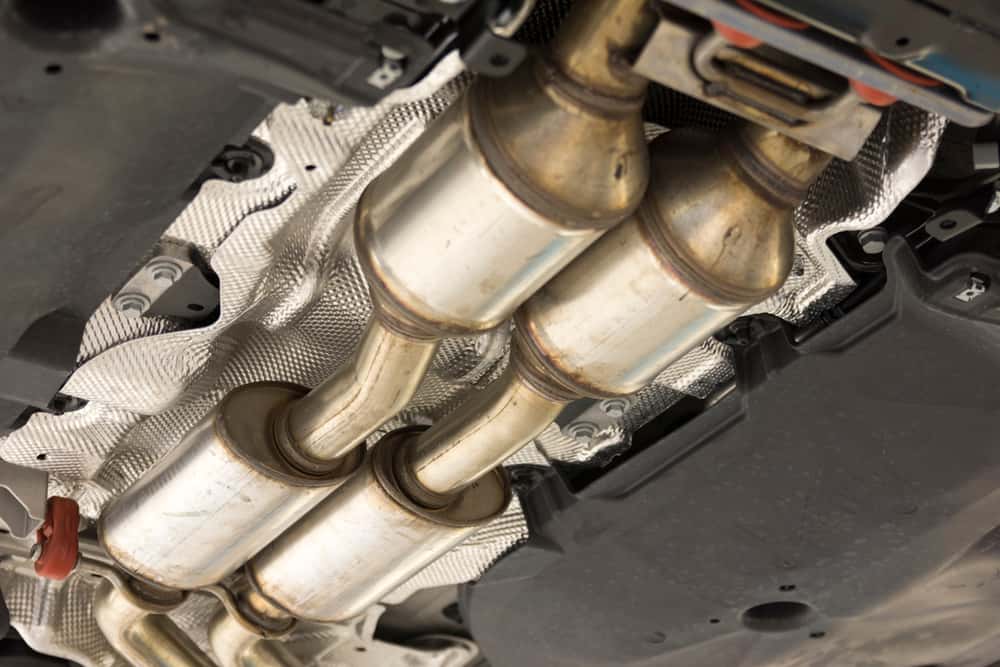 The average cost of a catalytic converter replacement is $100-$2,500 depending on the make and model of your car. You’ll also pay 1-2 hours of labor (on average) to have your mechanic put in a new one, which will cost anywhere from $60-$400 depending on the mechanic.

How Much Does Catalytic Converter Replacement Cost?*

Catalytic converters are normally very expensive parts and should often last the lifetime of the car.

Depending on whether you’re buying new, remanufactured, recycled, or secondhand converters, they’ll also cost anywhere from about $79 for the lowest end models to well over $5,000 for the highest end.

Here, your car’s make and model is one of the most important factors in cost.

For example, we looked at estimates for replacing a catalytic converter in 10 different popular car models:

The most important aspect of pricing a new catalytic converter is the make and model of the car.

However, the second most important factor is whether you choose new or used, aftermarket or OEM. A new, OEM part will always be the most expensive.

Finally, you’ll also have to consider factors like your mechanic’s rates and the age of your vehicle.

The make and model of your vehicle greatly affect the cost of your parts, providing you’re buying original equipment manufacture parts.

Here, you can expect OEM parts to average about $500 and up, with some like Toyota averaging around $1200.

That’s important, because these parts contain rhodium, which is used to convert exhaust into less harmful chemicals, allowing it to be exhausted into the air without harming you or the environment.

Catalyzing exhaust is necessary for safety, but the heavy metals used to achieve this are expensive. And, OEM parts are carefully controlled to contain specific amounts of those materials, meaning they always cost more.

If you choose an aftermarket catalyzer, you’ll sometimes see costs go down as low as $79. Often, these are universal parts, in which case they’ll have to be welded in place.

In other cases, they contain the bare minimum of rhodium. And, in others, aftermarket parts can exceed the quality of the original equipment manufacturer.

What you get largely depends on what you are buying, so it’s important to pay attention. However, not all mechanics will install aftermarket or made-to-fit parts. That’s especially true if you’re trying to have the work done by a dealer.

Condition of the Part

Another option is that you may be able to replace your catalytic converter with a secondhand, repaired, or remanufactured part.

This is an option because often, cars fail before the converters do. This can save you significantly over the cost of buying a new part.

However, again, not all mechanics will install secondhand cat converters. You might have to do the work yourself if you want to go with a secondhand part.

However, it’s also important to note that you should be careful to buy your new catalytic converter from a mechanic or a junkyard.

Secondhand parts may be stollen, as it’s quite common to steal and resell or melt down catalytic converters – because the metal in them is often quite valuable.

It’s also important to note that the cost of replacing a catalytic converter can involve significant installation costs. This is especially true if you have an older vehicle with a dual exhaust or if the old catalytic converter has been welded in place.

In most cases, welds are only surface welds to prevent theft. However, it does mean you may have to cut the old converter out before bolting the new one in place. That can add significant time to the total job.

However, in most cases, you can expect your mechanic to spend 1-2 hours on the job. That works out to an average of about $120.

But with mechanic’s rates ranging from $15-$205, or a national average of $60, that can vary significantly. For example, if you go to PepBoys or YourMechanic or a similar chain, you can usually expect hourly rates to be $95 or more.

Catalytic converters are not made to fail. If something has gone wrong with your converter, it’s usually a symptom of another issue.

For example, the most common reasons for a catalytic converter to fail include bad spark plugs, a bad oxygen sensor, improper engine timing, or a bad air/fuel mixture.

Your catalytic converter might also fail if piston rings, valve seals, or gaskets fail and leak fluid into the engine or burn off and clog the converter with soot.

If you don’t diagnose and fix these issues, you’ll simply have to quickly repair and replace your new converter as well. Therefore, it’s crucial to determine what happened to the old catalytic converter before replacing it.

Finally, physical damage is also common. If you’ve ripped the outside shell or dented it, you might be able to weld it.

However, if it rattles, it means the interior honeycomb structure has broken. This is often made of ceramic, which means the cat is no longer as functional as it once was and might have to be replaced anyway.

5 Symptoms of a Failing Catalytic Converter

Catalytic converters can go bad in several ways. For example, they can clog. On the other hand, they might break inside, which means they’ll start to rattle. Or, they can be ripped or broken open from the outside.

In each case, you’ll get different symptoms.

Exercise caution and don’t run your vehicle in a garage until after you replace or repair the converter.

If your car is getting hot, failing to accelerate properly, or not topping 50 miles per hour, it could be a catalytic converter issue.

Usually, this symptom means the converter is blocked and the exhaust isn’t ventilating properly. Full or partial blockage of the converter can both result in issues.

And, in some cases, you can simply clean the converter out instead of replacing it. However, you’ll still have to take it out to check.

Increased fuel usage may also relate to a failing or blocked catalytic converter. Here, the engine’s airflow is blocked, which means the engine has to work harder to generate the same power.

You’ll likely notice a decrease in miles-per-gallon before you actually notice acceleration issues. However, this can be difficult to trace directly to a converter without other symptoms.

If you live in a state with mandatory emissions testing and you’ve failed, the catalytic converter is a likely culprit.

Why? The converter is responsible for changing harmful emissions to carbon dioxide and other less harmful gasses.

If your vehicle is relatively new, chances are, a failed emissions test relates to the exhaust rather than the vehicle itself.

5. Rattling & Knocking in the Exhaust

If your catalytic converter is physically broken, it will rattle, knock, or make other sounds while running. In some cases, these sounds can come from the muffler.

In other cases, it means some of the honeycomb structure of the converter has been knocked loose. This will rattle around – giving you a lot of warning that something has gone wrong.

If you’d like to replace your catalytic converter, you can normally relatively easily do so yourself. However, the process depends a bit on the age of your vehicle and whether the old converter has been welded on or now.

For this guide, we’ll make the assumption that you have a single shaft exhaust which is common in all cars newer than about 20 years and that the converter hasn’t been welded on.

If it has been welded on, you can always use an angle grinder to cut it free.

Tip: If you buy a universal catalytic converter, you’ll have to weld it in place. Don’t buy one unless you have the tools to do so.

In every case, you’ll want to start your job by inspecting the vehicle, determining what caused the issue if you can, and making sure you have the tools to repair that.

However, your inspection might want to wait until you have the old cat out.

In addition, catalytic converters are installed under the car in the exhaust. They’re exposed to dirt, water, and the elements.

It’s always a good idea to go under your car with a wire brush and clean off the bolts. Then, you’ll want to thoroughly soak those bolts with penetrating fluid the day before you intend to take the bolts off.

Otherwise, there’s not much in replacing a catalytic converter. If you do have a universal model, you’ll want to weld it into place.

However, you should use the minimum weld to achieve a seal, so it can be taken out later.

If you still have questions, these answers should help.

Is catalytic converter worth replacing?

That depends on the age and condition of your vehicle.

If you buy a secondhand or aftermarket converter, you could complete the repair for as little as $79-$150. That’s generally worth replacing.

However, if you have a 20-year-old car and want to replace the converter at the dealership, you’re likely looking at a $2,000 bill and it wouldn’t be worth replacing.

Can I drive my car with a bad catalytic converter?

Theoretically, your car will drive with a bad catalytic converter. However, it might be extremely dangerous to you, the people around you, and the environment.

In addition, if you have clogs, your converter will create backpressure in the engine – meaning fuel economy goes down and acceleration goes down. With the price of gas, that could quickly be more costly than just replacing the converter.

What happens if I don’t replace my catalytic converter?

It’s illegal to drive without a catalytic converter.

In addition, it could be harmful to you and to those around you. You could also spend significantly more on gas.

Can a car run without a catalytic converter?

Your car can run without a catalytic converter, however, it will do so inefficiently and it will cause significant pollution.

If your catalytic converter is out, it’s been stolen, or it’s broken, replacing it can be costly.

You can save money by using aftermarket or secondhand parts and doing the work yourself.

Otherwise, replacing a catalytic converter is likely to cost $500-$2,500 with a normal mechanic.