Hydraulic power steering is a system designed to intensify the force applied to the vehicle’s front wheels when turning the steering wheel.

This is done with the help of a hydraulic piston connected to a gearbox that uses pressurized fluid to provide assistance during steering.

The fluid is pushed by a pump through two hoses connected to the steering gear.

When these hoses break or connections become loose, the lack of fluid can make steering difficult and the leak could even set the engine on fire.

The average cost of replacing a power steering hose with genuine parts varies from $212 to $1,992, depending on your vehicle’s make and model and location. The job generally takes between one and two hours, with labor costs setting you back $90 to $300 on average. Aftermarket parts are typically cheaper, with a hose costing as low as $15.

Power steering has moved from hydraulic to electric for over a decade now, but some automakers are still committed to fluid-based systems. Hydraulic steering is also found in older or hybrid car models.

The cost of replacing a power steering hose depends on the type of car you drive, replacement part availability, and your location.

*Median prices in the table were calculated based on estimate quotes received from independent auto repair shops. They refer to replacing a damaged steering hose with a genuine part. Replacing the hose with aftermarket or used parts will generally lower these estimates. Prices can go up when repairs are done at a dealership. All prices are correct as of October 2022 and intended to use as a reference only.

Power steering hose replacement costs vary from one automaker to the other.

Honda Accord and Pilot are among the cheapest to repair. Power steering hose replacement costs for these cars vary from $361 to $421 on average, depending on the actual model and your location.

Toyota is one of the brands that switched to electric power steering. However, hydraulic steering still equips the Camry models produced before 2019 – as well as other models from the brand.

In these cars, replacing a damaged hose can cost you around $763 on average.

Genuine parts are usually priced around $634 or slightly cheaper, while dealership mechanics typically charge between $113 and $143 for labor.

Some cars are even more expensive to repair, though. Replacing a power steering hose on an Infiniti G37, for instance, costs $1,268 on average. Similarly, you can expect to pay around $1,171 for replacing the hose on an Audi Q5.

Surprisingly, the Jeep Compass is some of the cheapest cars to repair. A power steering hose costs around $150 (genuine part), while labor is estimated around $60 to $76 at a dealership. 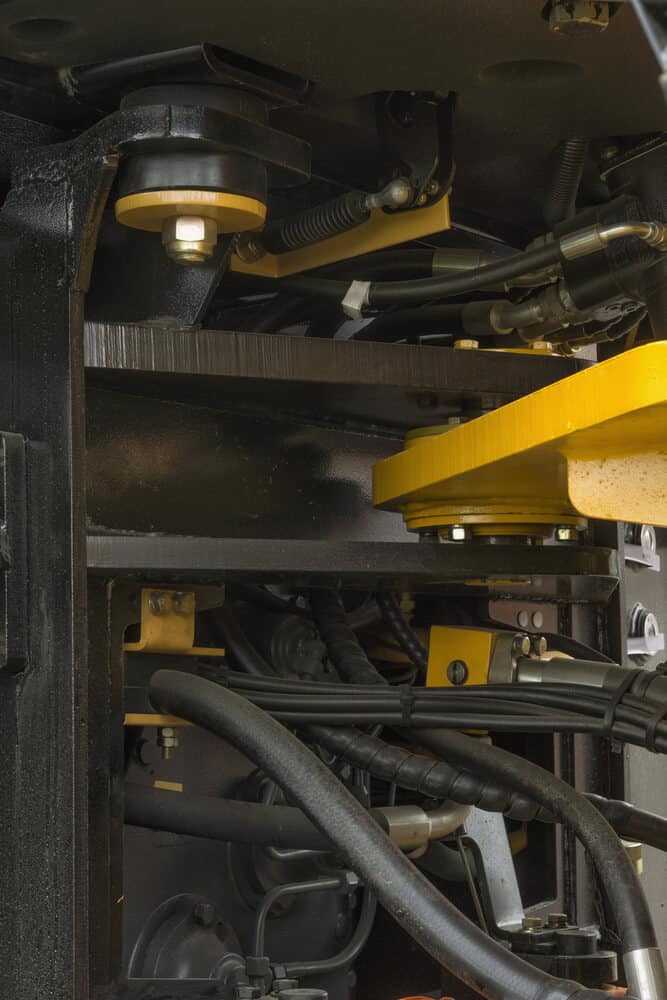 Power steering hose replacement prices vary based on a variety of factors.

The type of car is one of the main variables. However, the auto shop choice and whether you want to use genuine or aftermarket parts also affect costs.

*Costs in the table are estimates based on industry averages and quotes received from independent car repair shops. They are correct as of October 2022 and intended to use as reference only.

As the cost comparison table shows, there are crucial differences in power steering hose replacement prices for different car types.

Small city and family cars like Honda are generally the cheapest to repair. However, prices can differ from one model to another even if they come from the same automaker.

For instance, you can expect to spend around $250 on average, for labor and parts, to replace the steering hose on a Honda Pilot or Accord. However, prices can double for a Honda CR-V.

The actual model – including the year – can affect part availability. Some manufacturers discontinued the production of parts for older vehicles.

Some dealerships may still have some stock, but for some cars, the only real option is replacing the damaged hose with an aftermarket or used part.

Stock options can sometimes be ridiculously expensive too, especially if they have been discontinued but there is a relatively high demand.

There are two auto shop options – either an independent shop or a dealership.

Having your car repaired at an independent shop is the cheapest option, unless you’re skilled enough to replace the hose yourself. In this case, costs can drop down to $30 for an aftermarket part.

Original parts are more expensive, but you’ll still save on labor costs.

Dealerships are usually less in demand due to their higher labor rates, but this could be the wisest choice if you have an imported luxury vehicle.

European makes, especially, are differently constructed than US city and family cars. They have the same parts and work in the same way, but these parts could be connected differently or require specific expertise for fixing.

But just deciding between a corner shop and a dealership might not necessarily help you save.

According to specialists, the easiest way to ensure you get the best rate is to shop around. Contact several auto shops and dealerships in your area and ask for quotes.

If one of them offers a lower price, but that shop isn’t your first choice, it is worth mentioning it to the auto shop you want to take your car to.

Apparently, telling them that you got a cheaper quote elsewhere can lower their initial quote by an average of 14 percent.

There are three main replacement types: genuine, aftermarket, and used.

Original manufacturer parts are the best but also the most expensive option. The main advantage is seamless compatibility with your vehicle’s make and model.

Some garages that also run salvage yards may be able to source a secondhand hose for your car. However, used parts are not as reliable as new ones and can break at any moment.

They don’t normally come with a warranty, so you’ll have to pay again if they fail right after replacement.

Aftermarket parts are compatible with specific makes and models, or they can be universal.

Good-quality options can help you save – these parts are often cheaper than OEM ones. However, a universal hose installed incorrectly can cause further damage.

Besides the hose manufacturer, the actual hose that needs replacement can also impact costs.

Hydraulic steering systems have two hoses, high- and low-pressure. They are typically replaced together, but your mechanic might agree to only replace the damaged one if you want to keep costs low.

This is the supply hose that carries the hydraulic fluid from the power steering pump to the steering gear. It is designed to withstand pressure up to 1,500 PSI and can be made of as many as five layers.

An outer layer is designed to protect the inner layers against heat, chemicals, and abrasion, preventing degradation and puncturing.

The inner layers are usually made of high-tech polymers that give the hose the strength to resist high pressure. The innermost layer also acts as a seal against fluid permeation.

Due to the complex manufacturing process, high-pressure power steering hoses are generally more expensive than low-pressure ones, costing around $449 on average.

A low-pressure hose is used on the return branch of the system, allowing the steering fluid to return from the steering gear to the pump.

On this branch, the steering oil isn’t pushed with high pressure, and the hose is only tested to resist around 250 PSI.

While the hose must have the same outer resistance as all other elements in the engine bay, it doesn’t need as many inner layers.

Manufacturing costs are cheaper, and so are the replacement hoses.

The median price for a genuine low-pressure hose is around $150, but aftermarket parts are as cheap as $15.

A damaged power steering hose could cause damage to other components.

Additional repairs are often related to the steering gear, power steering pump, and other components in the system.

The table below compares the average prices for repairing or replacing these parts*:

*Average costs in the table were calculated based on quotes from independent auto shops and are correct as of October 2022. They are intended to use as a reference only.

Most small vehicles have a rack and pinion assembly instead of a steering gearbox (which is more commonly found in trucks, larger SUVs, and heavy-duty vehicles).

This assembly is more complex and more expensive to replace than a steering gearbox – it costs $1,685 on average.

A new steering pump is not as expensive, but it can still cut a hole in your budget. This part typically costs around $606 to replace.

Where you live can also affect costs.

Mechanics charge between $90 to $150 per hour, on average, but rates can vary from one state to another.

Michigan, for instance, is one of the states with the cheapest hourly rates. Labor often costs over $130 per hour in states like New York and California.

Prices also tend to be lower in cities where auto shops have a lot of competition.

Replacing a steering power hose takes between one and two hours on average, so labor alone can cost between $90 and $300.

Is It Worth It To Replace The Power Steering Hose? 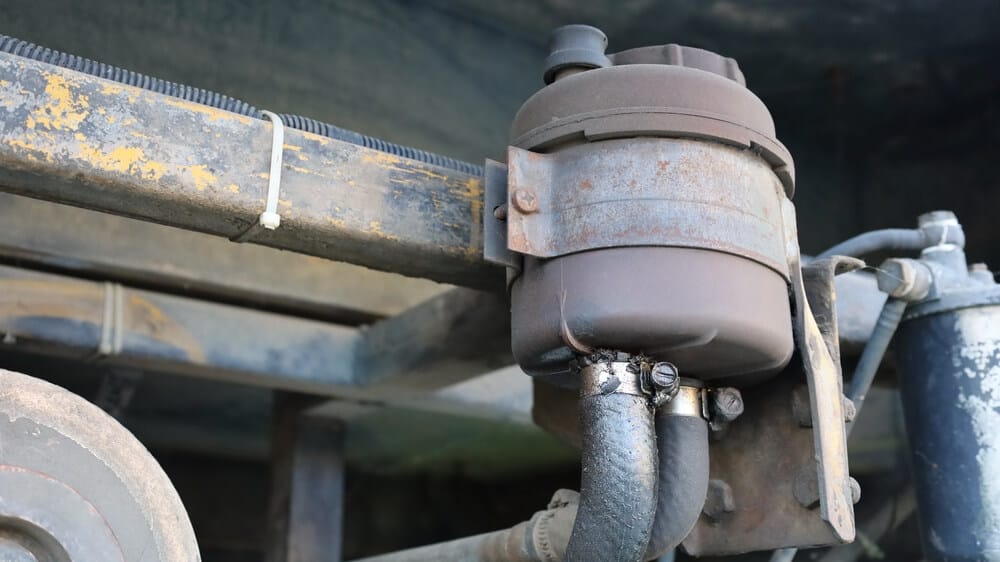 If your vehicle has hydraulic steering, replacing a damaged steering hose is not only worth it but necessary.

Driving with a bad power steering hose could result in a number of problems. For instance, it could cause premature wear and tear to the steering system, since the wheels become harder to turn.

A damaged supply hose can lose pressure through a faulty connection or puncture. This puts more strain on the pump, which can get damaged.

The hose could even ruin the engine. If the steering fluid is sprayed on the hot engine, it could catch fire. A small fire could die out and only damage the engine. In severe cases, it could set your entire vehicle in flames.

How far can you drive with a leaky power steering hose?

The further you should drive with a damaged power steering hose is the nearest auto repair shop.

Where does power steering fluid usually leak from?

The system’s seals and gaskets are the typical places where power steering fluid leaks from.

Power steering hoses are made of hard-wearing materials that rarely get punctured or damaged.

This could happen, though, so you should take your car to a mechanic for an inspection.

No. The check engine light usually doesn’t come on until the damage extends to engine components.

However, you can notice steering trouble signs such as difficult steering or the wheels that seem not to respond when turning the steering wheel.

A red or reddish-brown stain is typically linked to power steering leaks.

Replacing the power steering hose or hose assembly as soon as you notice leaks is crucial. This repair can cost between $212 to $1,192 on average, depending on the type of car you drive, location, and auto repair shop.

Additional repairs can sometimes double the price. In general, though, you should calculate about 20 percent on top of the original quote to stay on the safe side.