The Most Expensive Places to Own a Home in California

The Golden State is one of the most sought after places to live but, unfortunately, one of the most expensive in the nation. There are simply too many people and too few of homes. Nonetheless, there are some places that are actually a bit more affordable than others.

Least Affordable Cities to Own a Home in California

In California, the average person will spend 30% of their income on housing. However, there are some areas of the state, notably in the around the Los Angeles area where residents need to spend upwards of 60% of their income to afford housing.      What is striking about the data is the least affordable areas are not the ones with the most expensive homes in terms of monthly costs. Rather, there are pockets of towns scattered throughout LA county and the Bay Area where housing costs are below or about average for the state of California, but the median income for residents of those towns are just simply not high enough to comfortably afford living there. 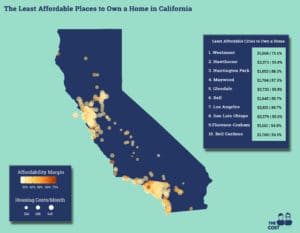 The Most Affordable Cities to Own a Home in California

The most affordable places to own a home in California are mostly located in the Bay Area or in the Central California. Only one is found in Los Angeles. Here residents are less cost burdened, and pay roughly 23% to 30% of their income toward housing. 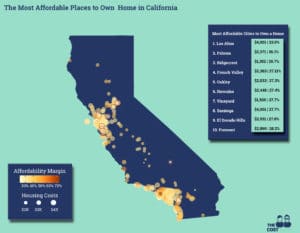 We encourage you to explore our data to see how your city ranks. We looked at over 300 cities and towns in California where the population was over 25,000.

To find the least and most affordable cities in California we turned to the 2017 American Community Survey. We pulled data from the Housing survey as well as the Economic survey to get a fuller picture on home owner affordability in every CDP in California. We then filtered for only CDPs with greater than 25,000 people. To get the affordability margin we took the median monthly housing costs which include mortgage, insurance and tax costs and multiplied by 12. We then divided that amount by the median income for each CDP.