The Most Expensive Cities to Own a Home in Texas

Texas is home to over 7 million homeowners making it one of the biggest states for owning a home. Throughout Texas however there are numerous cities and towns where people struggle to afford a home. In this study we discover where in Texas are the most and least affordable places to own a home.

The Least Affordable Places to Own a Home in Texas

The least affordable places to own a home in Texas require residents to pay between 40% and 50% of their income toward housing. Astute Texans may notice that a few of the cities on the list are considered college towns such as College Station, Nacogdoches and San Marcos. For these cities it may be case where a majority of the population are students and thus have low incomes making these cities to appear to be less affordable than they may be for a working population. On the other hand, Dallas ranks #8 on the list of least affordable making it the least affordable “big” Texas city on the list. 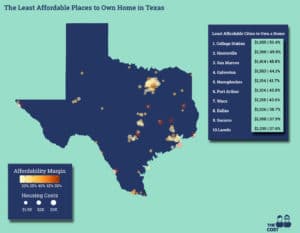 The Most Affordable Places to Own a Home in Texas 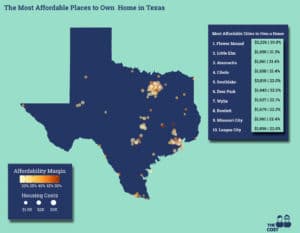 How Every City Ranks in Texas

To see how every city with over 25,000 residents in Texas stacks up, explore the table below. In Texas there are over 120 cities with population size over 25,000 encompassing 60% of the total population of the state.

Also see  What Is Amazon Digital? 2022 Ultimate Guide
Also see  Why Are Apartments So Expensive? [11 Reasons 2022]

To find the least and most affordable cities in Texas we turned to the 2017 American Community Survey. We pulled data from the Housing survey as well as the Economic survey to get a fuller picture on home owner affordability in every CDP in Texas. We then filtered for only CDPs with greater than 25,000 people. To get the affordability margin we took the median monthly housing costs which include mortgage, insurance and tax costs and multiplied by 12. We then divided that amount by the median income for each CDP.