If your windows aren’t closing properly, fixing or replacing the window regulator will likely solve the issue.

Here, it’s most likely that you have an electric window regulator – which means you’ll probably have to replace the full system.

However, if you have an older mechanical regulator, you might be able to get away with replacing a small part of the system to fix it. 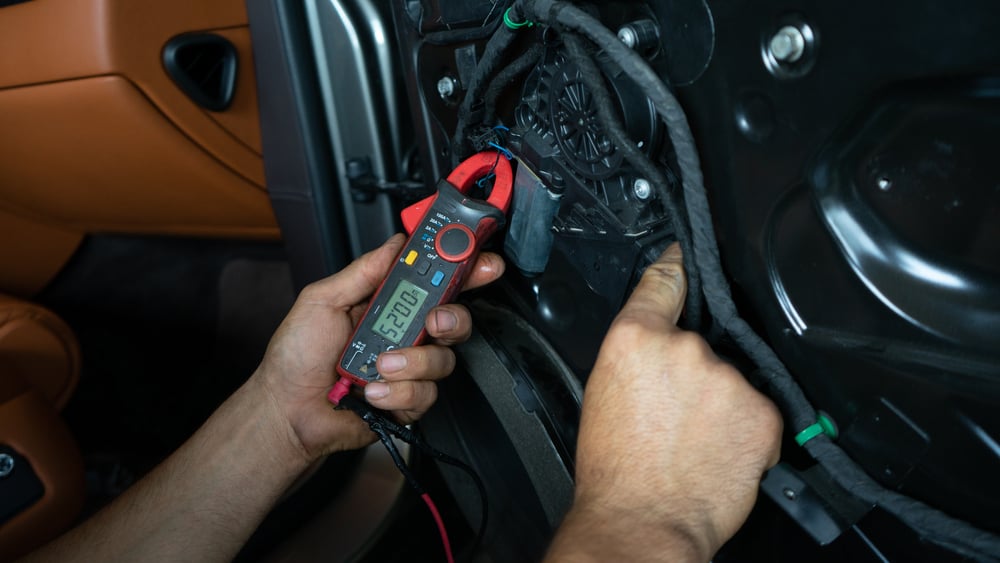 How Much Does Window Regulator Repair Cost?*

In most cases, the largest cost consideration when replacing a window regulator is the cost of labor. That’s because you’ll have to take the door apart to fix the issue.

In addition, high-end window regulators can cost several hundred dollars. If you have an older car with a manual system, replacing the full thing will normally cost a great deal as well. However, you can often get away with replacing a small part of it.

Because most modern cars use a single-piece electric system, you’ll likely have to buy the whole regulator, and that varies by car make and model.

Replacing a window regulator can vary quite a bit depending on the vehicle, the difficulty of tearing down the door, and the type of regulator you have.

Here, cost factors like the make and model of your vehicle, your regulator type, and the cost of labor will be most important.

Mechanical – If you roll the windows up and down by turning a window crank, you have a mechanical regulator. These systems are made of complex systems of gears, which raise and lower the window using mechanical force.

Here, issues usually happen when part of the system misaligns, when something gets damaged, or when gears slip. Often, you can fix these by simply re-aligning the system. In other cases, you might have to replace small parts of the system.

However, you’ll only likely pay a few dollars for parts. The rest will be labor.

However, because the mechanical window regulator requires more time to assess, diagnose, take apart, and repair, you’ll likely pay more in labor. So, you can expect a mechanical fix to take around 2 hours of time.

Automatic – Automatic window regulators are normally repaired by replacing the full system. That’s because if something goes wrong, it can be difficult to tell where it does.

In this case, you’ll normally pay $15-$250 for a new electric regulator. Then, you’ll pay for the mechanic to take the door apart and insert the new regulator into the window.

On average this will take about an hour of time, but you might pay for 2 if your vehicle is more difficult.

Some vehicles are very easy to tear down and take apart. For example, you may be able to access the window regulator by simply taking off the interior door panel.

In other cases, you might have to take the door off, take off the exterior frame, and access the door panel that way. In this case, the system will take a lot more work to access and repair.

Electronics in the door will also impact the total amount of work. For example, front windows normally take more time to tear down than back windows.

If you have electronic mirrors and lights in the door, you’ll have a slightly more complicated teardown. However, work should still be feasible within 1-2 hours.

The cost of labor will significantly impact the total cost of replacing your window regulator. Here, you can normally expect to pay for 1-2 hours of labor.

On a national scale, mechanics charge anywhere from $15 to upwards of $205.

That averages out to about $60 if you have an independent mechanic and about $95 for a chain shop. You’ll also have to pay for shop fees, which range from 5-20% of the total cost.

Often, you’ll only have to replace one regulator at once. In fact, there’s no reason to replace all of them at once.

However, the factors that make one regulator fail may cause another to fail at around the same time. Therefore, you might have to replace the window regulators on more than one door.

In many cases, you’ll have to pay to figure out what’s wrong with your window regulator.

Here, your dealer will likely charge you around $200 to take the door apart and check. A different mechanic might charge much less. Often, this will translate into a discount on the actual repair if you do it with the same mechanic.

However, just the diagnostic will not be free or cheap.

4 Symptoms of a Bad Window Regulator

If your window regulators are going bad, you’ll notice the window mechanism is having issues. Here, symptoms can range from mild to severe and your windows might even drop out of the frame and into the door.

The following four symptoms are usually a good sign it’s time to replace your window regulator.

If your car window rattles, groans, creaks, or clicks when going up or down, you likely have an issue in the regulator.

Here, the problem might be as simple as something being stuck in the door. In other cases, it means the mechanism is loose. If you have a mechanical regulator, it probably means the system is coming out of alignment.

In either case, you’ll want to fix the issue before it gets worse and the window slips, gets stuck, or breaks.

If your window sticks up or down, your regulator is broken. But, if you roll your window up and it slides down or slides out of alignment and is crooked, you also have a regulator issue.

In some cases, it means the window has slipped out of alignment on the regulator. Therefore, you might be able to put it back into place with little effort. However, you’ll still have to take the door apart.

If you have to push the button to roll the window up or down multiple times, you probably have a regulator issue.

Here, you might not have to replace the regulator just yet. However, this is a very good early warning sign of upcoming regulator failure.

On the other hand, it might simply be an issue with the button, which will be cheaper to fix. Here, you can have a mechanic run a diagnostic check to see if anything comes up.

If the window motor is going out, it may respond intermittently with to much force, not enough, or no force. This is a good sign that the regulator is going out and you’ll have to replace it.

That’s especially true if it goes from too slow to too fast or even sometimes gets stuck and you have to re-push the button to fix the issue. When that happens, you should expect to have to replace the regulator and fairly soon.

In addition, if you leave it and keep rolling the window up and down, it could cause damage to the track or to the glass. Therefore, if you don’t intend to replace the regulator right away, try leaving the window up as much as possible.

If your window regulator is going out, you can likely repair or fix it on your own with few issues. In most cases, you can replace the full assembly in about an hour.

In most cases, you won’t actually need any tools but a screwdriver set and a ratchet and socket set or a wrench set. This makes it relatively easy to do. However, you will have to take apart the door or the paneling to access the mechanics.

Importantly, you might want to start out by checking the fuses. However, if all of your windows are working but one, it’s likely a regulator or a switch issue instead of a fuse.

You may want to unplug your car battery before you get started. However, it shouldn’t be necessary.

If you want to be sure you don’t short anything out, unplug the battery from the negative terminal and tuck the cable up out of the way.

Make sure you leave the car door open or have the keys on you when you do this, as your car will lock the doors and windows when the power is cut.

It’s always important to test the window before you put everything back because the mechanism can jam.

You’ll also want to be careful about tightening bolts to ensure you don’t break the glass.

If you still have questions about replacing your window regulator, this FAQ should help.

What causes a window regulator to fail?

A lot of things can go wrong with a window regulator.

How long should a car window regulator last?

Most new window motors have a warranty for 3 years or 36,000 miles.

However, most will last significantly longer. In fact, it’s fairly common for window regulators to last the lifetime of the car.

How do you know if it’s the window regulator or the motor?

The motor is the part of the window regulator that moves the window up and down. If the window is slipping or loose, it’s the frame. If it’s struggling to go up or down, it’s likely the motor.

How many window regulators are in a car?

You have a window regulator per window that moves. In most cars, that’s four.

Repairing a window regulator will normally cost you between $300 and $500 per door at a mechanic.

You can do the work yourself to reduce the cost to around $75-$100 per door plus about an hour or more of your time per door.