Most timing belts are made to last anywhere between 60,000 and 100,000 miles. Normally, you’ll have to replace the timing belt at least once during the lifespan of the car. And, if yours is going out, you’ll notice significant issues with engine power and timing.

The timing chain keeps the crank and camshaft working in unison. They also operate the water and oil pumps. So, if your timing belt is going out, you might also start to experience issues with overheating. 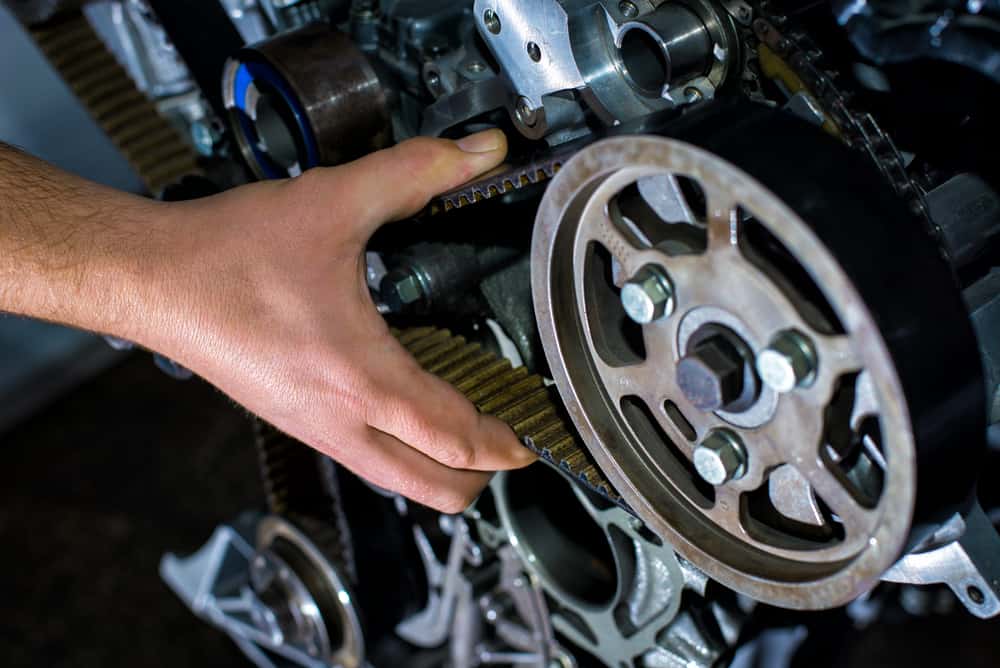 The average cost of replacing a timing belt is $800. Here, you can expect pricing to range between $300 and about $1500. The part itself is often just $25-$89.99. However, with several hours of labor needed to remove and replace the timing belt, labor makes up most of the cost.

How Much Does Timing Belt Replacement Cost?*

Timing belts are nylon-reinforced rubber belts, linking the camshaft to the crank shaft. In most cases, the belt itself is relatively simple but is threaded through a complicated system of tensioners and pulleys.

It’s also linked to the water pump, which can greatly increase the time needed to replace it.

While many modern cars have switched to using a timing chain instead of a timing belt, both are a form of cambelt. And, both normally cost about $300-$1500 to replace, or an average of $800.

However, you can get aftermarket parts for as little as a few dollars. On the other hand, most of the work is actually putting the chain in, which requires disassembling the engine and then resetting the timing. This varies per vehicle, which can significantly impact costs.

The following includes an estimate of the cost of replacing a timing belt in 10 popular vehicles.

* Note: Prices are estimates and were correct at the time of writing (February 2022). Cost estimate may have changed since, our figures should be used as a starting point for your own research.

Replacing a timing belt normally costs anywhere from $300 to more than $1,000. If you have a luxury or performance car, it may even cost more. That’s especially important as many modern vehicles now have timing chains in place.

So, chances are, if you have a timing belt, you might be driving an older model of your vehicle. That could mean parts aren’t as accessible and you will pay a premium.

However, many cars still come off the assembly line with timing belts installed, so that’s not always the case.

Otherwise, you’re looking at factors like the make and model, what you replace, cost of labor, and the part brand.

In some cases, you can get away with replacing nothing but a bad timing belt. However, that can be a bad call.

Normally, timing belts last 60,000-100,000 miles. The tensioners and pulleys around the belt have a similar lifespan, as does the water pump.

That’s why you can frequently buy a timing assembly, complete with the belt, pulleys, and tensioners in one package.

Why would you want to replace everything at once instead of just replacing what’s broken? The cost of labor is often as much or more than the cost of parts.

Breaking down your engine and only replacing one part, when you could replace tensioners (which usually cost a few dollars), and pulleys at the same time.

For example, you could pay $200-$500 to take apart your engine and replace the timing belt. Adding on labor to replace the tensioners and pulleys might bring the total cost up to $1,000 – but it will be much cheaper than paying another $200-$500 in a year to replace those parts.

That’s especially true considering bad tensioners and pulleys can cause your timing belt to go bad. If your tensioners go out, you might have to replace the belt again.

Some vehicles cost more to repair than others. This is especially notable with performance vehicles. For example, you’ll normally pay $300-$500 for genuine Infiniti parts.

The make and model of your vehicle affect the cost of replacing the timing belt in several ways.

The first is the direct cost of the parts. If you’re buying OEM, you can expect some brands to cost more than others. Here, Ford tends to be on the higher end of the scale and Honda on the lower end. However, that’s not always the case.

In addition, the make and model affect the complexity of the engine. For example, in some engines, you can access and remove the timing belt with very little difficulty. In others, you might actually have to lift up the engine block to access it. So, this will affect the time-to repair.

Finally, the make and model affect what your mechanic is familiar with. If you drive a common vehicle, they’re likely familiar with the job and know how long it takes and what to charge. That will save you money on the quote.

Of course, you can always save money by choosing aftermarket or made-to-fit parts instead. However, not all mechanics use them. And, you’ll want to ensure they meet the specifications for your engine.

Labor costs are one of the most important factors in replacing a timing belt.

For example, if you pay an average of $60 per hour for a mechanic (this ranges from $15-$250 nationwide), you can estimate the average belt replacement costs at least $180.

That’s because replacing a timing belt can take 3-4 hours for a professional.

If you live somewhere where rates are higher, you can expect to pay more. Dealerships and major chains often charge between $94 and $210 per hour for repairs.

4 Signs of a Bad Timing Belt

Bad timing belts usually result in noises in the engine, misfires, and loss of power. That can turn into extra gas usage, noticeable knocking or banging under the hood, and even engine overheating.

While most of those symptoms can relate to other issues, they’re a good sign it’s time to inspect the timing belt.

1. Sounds Under the Hood

Timing belts stretch out over time, which is the most common reason they need to be replaced. Once loose, they will knock or bank inside the timing belt cover.

The result is a slapping or knocking sound, depending on how much velocity goes into the sound and where it’s hitting. You might also hear grinding noises.

While other problems can always cause noises under the hood, it’s always a good reason to inspect things. And, because the timing belt is a good culprit, inspecting that first can be a good step.

While the most common cause of misfiring is the spark plugs and fuel injectors, the timing belt can cause this issue as well. Here, your engine timing is likely to go off.

If the belt is too loose or worse, slipped, the cam and crank shaft won’t rotate at the same speed. Then, the cylinder valves will close at a rate not timed with the rest of the engine.

So, fuel injectors could miss adding fuel. The engine would then fail to ignite, and you’d get a misfire.

If you’re having a hard time starting your vehicle, it might be a timing belt issue. As explained above, the timing belt synchronizes the engine turning over.

If the timing belt is loose, the engine might not turn over. So, you might require extra time to start the vehicle.

Or, you might have to slowly build up to starting the car or even peddle the gas. In either case, it’s likely a sign that something is going wrong with the timing belt.

If your vehicle is losing power, especially going into turbo, you might be having a timing belt issue. Here, you’ll likely also notice issues with fuel consumption.

For example, your vehicle starts using more fuel to get up to speed. You won’t notice the issue at first.

However, over time, it can become a real problem, as it will cost more than simply replacing the belt.

How to Change a Timing Belt (20 Steps)

Replacing the timing belt yourself can save you a lot of money. However, it’s important to pay attention, to get everything right, and to set the timing correctly. Otherwise, you could burn out the engine or cause other issues.

In most cases, you can expect to spend at least 3-4 hours on the job. However, the time required depends significantly on the make and model of your car and how complicated it is.

It’s always a good idea to replace the full timing system at once. You can choose not to.

However, you might have to replace everything else relatively soon after. In most cases, it’s a good idea to decide based on how many miles it’s been since you’ve replaced those parts. Most times, they’re good for about 100,000 miles.

Some vehicles have more pulleys and tensioners than others. Therefore, there are no specific instructions here.

However, the process is always the same. Take them off, clean them, put them back. And, make sure you get the alignment correct when putting everything back.

Replacing a timing belt is one of the most complicated bits of engine repair you might do. It’s highly likely you still have questions.

What is the average life of a timing belt?

In most cases, after 5 years, you should just have them replaced along with the sprockets, tensioners, pulleys, and water pump as preventive maintenance.

What happens if you don’t replace timing belt?

Depending on your vehicle’s engine, you could simply have power and driving issues or your pistons might impact with the engine and permanently damage it.

In most cases, you’re looking at an engine that doesn’t work once something goes fully wrong.

Can I drive with a bad timing belt?

You can drive to a mechanic. It’s unlikely that your timing belt will go from slight failure to dramatic failure immediately.

However, driving with a bad timing belt is always a risk. And, the extra cost of gas, the cost of potentially being towed, or of potentially totaling your engine or your car if the belt goes while driving is also important to take into consideration.

Worn timing belts make a knocking or slapping sound under the hood. In other cases, you won’t be able to hear them at all.

Replacing a timing belt costs an average of $800.

The timing belt itself will cost anywhere from about $17-$500 depending on the brand, make and model of your car, and the retailer.

Finally, while you can replace the timing belt yourself, it’s crucial that you get the timing right when putting everything back together, as misaligning your engine can quite literally destroy it.