If your tail light cover is cracked or broken, you’re probably required to replace it just to stay on the road.

Even if you’re not, replacing the taillight cover ensures other drivers can easily see your signals, so you and they stay safe on the road. 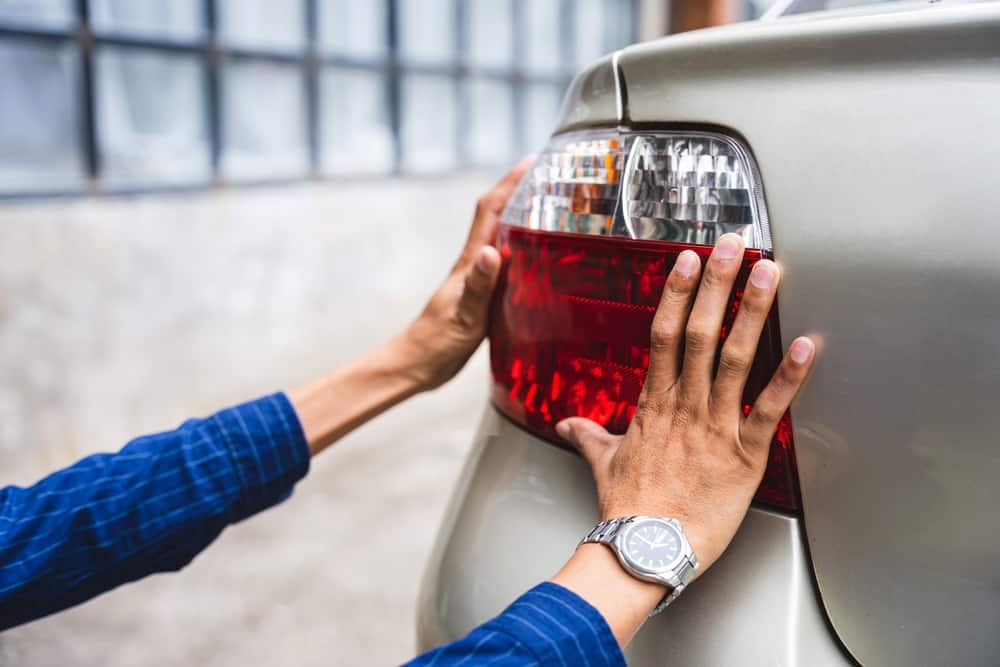 How Much Does a Tail Light Cover Replacement Cost?*

The cost of replacing your tail light covers will depend on the cover, the make and model of your vehicle, and the type of light.

For example, if you have a non-serviceable LED bulb, you’ll have to replace the full taillight housing and light.

The following include price assessments for replacing the taillight cover or lens in several popular vehicles.

If you’re replacing the tail light cover, the cost will range from under $20 to well over $200. Here, the most important factor is the make and model of your car and which parts fit it. 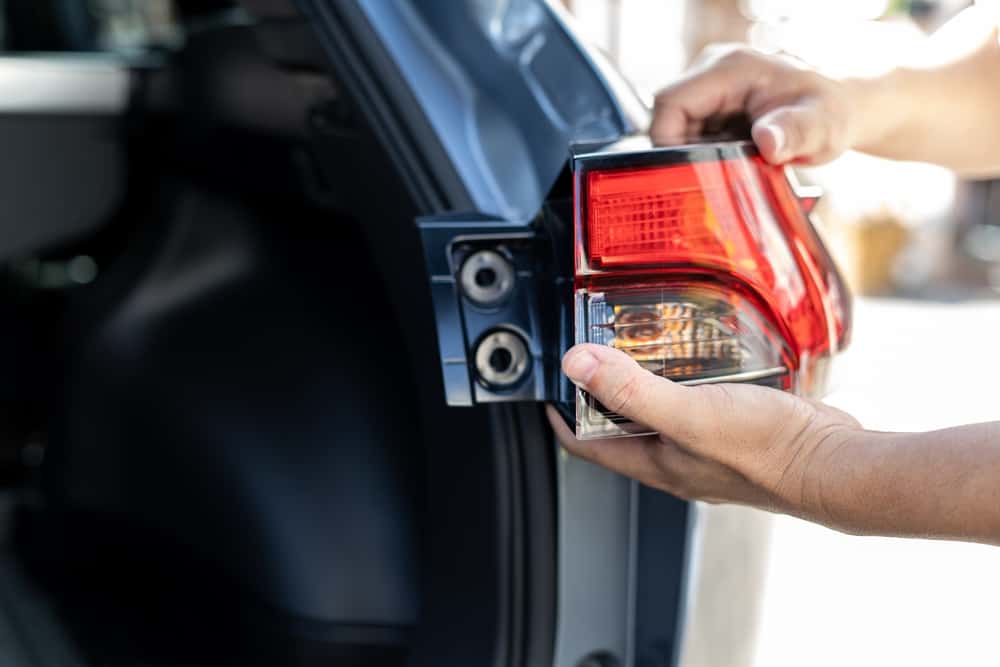 However, there are many other cost factors.

In principle, the lens, cap, or cover on a taillight is a simple piece of plastic. Unfortunately, that’s not always true.

On many modern cars, the taillight is part of a larger light housing that contains other signal lights such as brake lights, rear turn signals, and even rear fog lights. If the cover breaks, you’ll have to replace it over all of these lights.

In addition, not all taillights are serviceable. If you have an LED fixture, chances are high that you’ll have to replace the full assembly including the housing. That will cost significantly more than just replacing the cap.

If you have an old or uncommon car, you might not be able to buy the cover easily.

In addition, some manufacturers simply don’t sell separate tail light covers. Therefore, you may have to replace the taillight assembly in full.

Of course, if it’s simply a matter of availability, you can check with junkyards, Craigslist, or eBay to try to find the part you need.

However, you might not be able to source it from your mechanic without buying the full assembly.

Damage to the Light

In many cases, if your tail light lens is damaged enough to need replacement, other parts of the assembly could be damaged as well.

This means you might have to replace the assembly in order to actually place the new part.

In most cases, you can expect your mechanic to spend about an hour per taillight, although the job can take more or less time depending on the make and model of your car.

On average, on a national scale, that means you’ll spend about $100 on labor.

However, some cars require disassembling the rear paneling to remove the light assemblies. If that becomes necessary, you’ll probably pay for several hours of labor instead.

Taillight assemblies and caps vary significantly in cost. You could pay anywhere from $20 to well over $200 for a new light assembly or cover.

Unfortunately, it’s very difficult to predict what those costs will be without looking it up for your specific make, model, and year of car.

While many people would prefer to ignore tail light damage, that may be a bad idea. In fact, in many cases, it may be against the law to drive with a broken taillight cover. 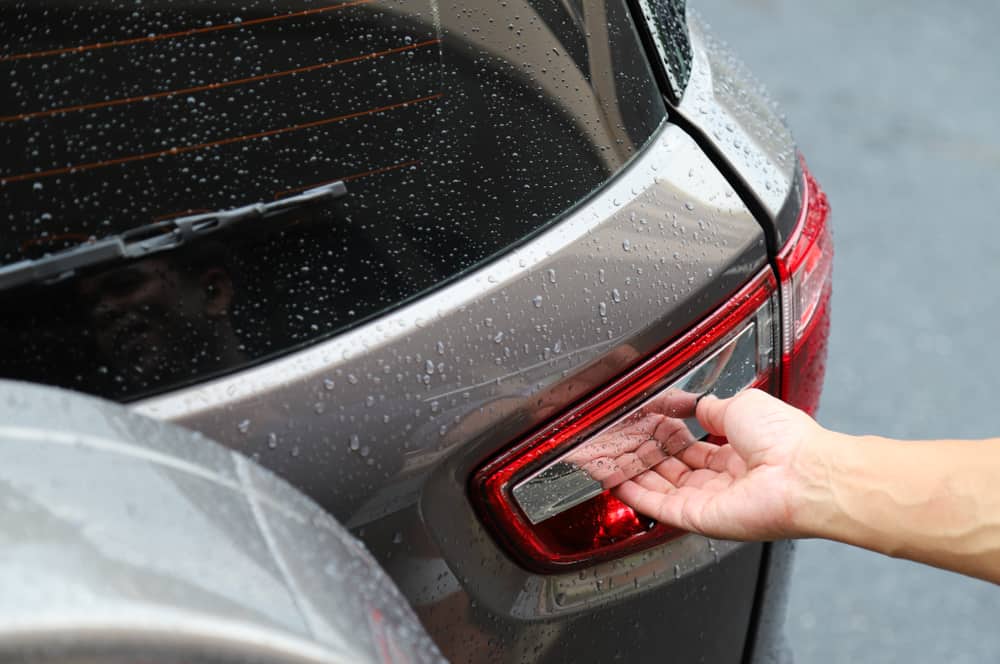 Therefore, you should always take steps to replace broken parts as they happen.

1. The Cover Is No Longer Watertight

Small cracks and holes in your taillight cover might not legally warrant replacement, but it may be a good idea to do so anyway.

Most covers are designed to keep water and debris out of your light. When they break, that’s no longer the case.

Once you lose the watertight seal, the inside of your light could rust or fill up with debris. That will mean losing the full assembly much more quickly than if you replaced the cap.

If you do have a replaceable cap, taking the time to get a new one could save you a significant amount of future costs.

2. You Can See the Light Through the Cover

It’s illegal to drive with a light showing, providing the light is a different color than the cap. This means that if you have visible white light coming out from around a red cover, you’ll have to change it.

You can use a temporary fix of sellotape and a red sharpie to get your car to the garage. However, this fix won’t last.

3. The Cover Blocks View of the Light

If your taillight cover is scratched or cracked so badly it’s hard to see the light, it’s time for a new one.

Lights exist to keep you and other drivers safe. Taking the time to replace it is important.

How Do You Replace a Taillight Cover? (10 Steps)

You can often replace a taillight cover yourself to save more than half the cost of the repair.

Here, it’s important to check your car’s manual upfront to see what type of cover you need and what type of bolts you need.

It’s also important to note that there are many types of taillight assemblies. In the simplest, you’ll be pulling off a few screws and putting on a new piece of plastic.

In some cases, you’ll want to use adhesive to fix the cover in place. However, most vehicles use screws instead, which makes it much easier to do follow-up repairs.

Replacing a tail light cover will vary quite a bit from car to car. Chances are, you still have questions.

Can you replace just the plastic on a tail light?

That depends on the make and model of your vehicle. In the simplest cases, you can simply unscrew the plastic on the top and replace that.

However, in many newer cars, the cover is part of the housing assembly. That will mean replacing the full assembly to fix the cover.

In most cases, the older your car, the easier it is to replace “just” the plastic.

What do I do if my taillight cover is broken?

If your tail light cover is broken you can normally tape over it. Here, you’ll want to use a marker to color the tape to the same color as the light.

Why? It’s illegal to have your light showing at any color other than the color of the plastic. From there, you can go to your mechanic and have the work done without worrying about getting a ticket in the meantime.

For example, if your bulbs are the same color as the plastic cover, it’s actually possible to drive for a while without replacing the cover.

However, doing so will result in more damage to the bulb and the electronics, so this isn’t recommended.

Can I drive with a broken taillight cover?

In most states, it’s illegal to drive with the bulb showing a different color than the light cover. In addition, driving with a broken taillight cover could increase damage to your car.

In some cases, you could also get a ticket for a broken taillight cover, even if your lights are the same color. For that reason, you probably want to get the problem fixed ASAP.

How long does it take to replace a taillight cover?

In most cases, it should take about an hour to replace a taillight cover.

However, if you have an old car, you might be able to do the work in about 15 minutes. If you have to replace the full housing, it might take a bit more.

However, on average, your mechanic shouldn’t bill you for more than a maximum of 2 hours for the job.

If your taillight cover is broken, it’s time for a new one. In most cases, you’re legally obligated to have broken covers replaced. If you do, the average cost of replacing a taillight cover is $150-$200. Of course, you can save money by doing the work yourself. And, the actual cost will depend a lot on what kind of light your car uses, whether you have to replace the full housing assembly, and how difficult it is to remove the old cover.