The serpentine belt threads through the engine compartment, driving multiple functions. These range from the water pump to the alternator, power steering pump, air conditioning compressor, and air pump.

When it starts to go bad, you’ll lose efficiency or even operation of each of those parts. And, that can be disastrous for your engine.

For that reason, you’re normally recommended to replace the serpentine belt every 50,000-100,000 miles, whether it’s bad or not. 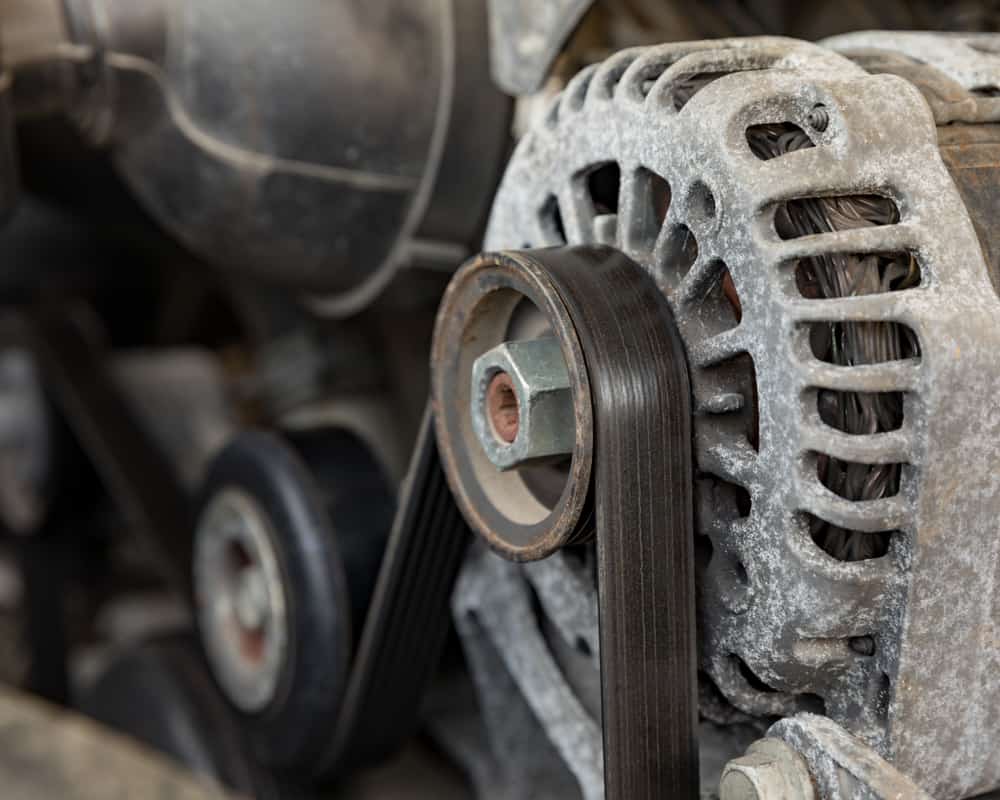 The average cost of serpentine belt replacement is $180. That normally works out to $17-$90 in parts and $100 in labor. In most cases, you’ll pay for about an hour of your mechanic’s time to install a new serpentine belt.

How Much Does Serpentine Belt Replacement Cost?*

Or, if your serpentine belt feeds through a particularly complex tension system, it might take more time to replace.

Other cost considerations include the make and model of your car. Here, you can expect to pay more for your serpentine belt replacement if you have a luxury or performance car.

For example, you can see normal cost estimates for 10 popular vehicles below:

If you’re replacing the serpentine belt, the largest factor is usually labor. That’s because it can take 30-60 minutes to take out and replace the belt.

In addition, you’ll have to consider the cost of the belt and any other parts you swap out at the same time.

Labor costs can make up 2/3rds of the cost of replacing your serpentine belt. Sometimes you’ll even pay more.

That’s because replacing a serpentine belt means pulling the old belt out, getting the timing right, and putting the new belt in. If you make a mistake, part of your engine won’t work, which can cause major issues when you start driving.

In addition, some mechanics have a minimum rate, such as a one-hour fee to make the job worth their time. That’s why brands like YourMechanic, Midas, and PepBoys can charge an almost flat-rate fee for the work.

In addition, some vehicles are more complex than others. This means it may take longer than the 30-60 minutes to do the work.

That’s especially true if your mechanic isn’t familiar with the system. Therefore, if they don’t know the car, you will pay more for the work upfront.

Cost of the Belt

Serpentine belts are made of nylon reinforced rubber. In most cases, these are single direction with bands on one side to fit into the pulleys and gears.

These are relatively inexpensive. The most basic versions start at $10-$15. However, quality, heat tolerance, and structural integrity can vary. It’s important to check what you’re getting for the money.

Here, most mechanics and most dealers will only install OEM parts. If you’re doing the work yourself, you might choose to switch to aftermarket belts to save money.

How much? OEM belts usually cost between $50 and $80 for normal passenger cars. But, there is definitely something to be said about guaranteed quality with an OEM belt.

If your belt is bad, chances are, the tensioner is near the end of its lifespan as well. For that reason, many mechanics will offer a full-service package to replace the tensioners and possibly even the sprockets on the pulleys. The latter may not be necessary.

In most cases, tensioners are cheap and are an easy way to avoid future maintenance. For example, if the tensioner goes bad, it could break your new serpentine belt. That will cost you a lot more than just replacing both at the same time.

What Are the Signs of a Bad Serpentine Belt?

In most cases, if your serpentine belt is going bad, the first thing you’ll notice is noises. However, you might also notice other signs, like air conditioning issues, coolant issues, or even the battery going dead.

While the following symptoms of a bad serpentine belt can mostly relate to other causes as well, they’re generally a good sign to inspect the belt itself.

When you do, you can usually see if something is going wrong. For example, if the belt isn’t tight on the pulleys, something is wrong. If there are visible signs of wear and tear, it should be replaced.

And, if there are scratches or cracks or even fraying, you definitely want to replace it.

Inspecting the serpentine belt is also easy, so if you suspect something is going wrong, checking the belt is a good first step.

Serpentine belts often drive the alternator, the air compressor pump, the coolant pump (although the timing belt can drive this as well), and the power steering pump.

Here, the serpentine belt might become loose on just one pulley. It might also loosen on all of them. It might catch on a pulley based on how it’s set up.

There are dozens of things that could go wrong, so you might have issues with just one or all of the connected systems.

If you’re hearing a high-pitched whine from under the hood, the serpentine belt is a likely culprit.

This belt catches and whines when it’s too tight or when it slips a pulley and rubs against the side of the case. You might also hear the pulleys whining, especially if the belt is putting too much or not enough tension on them.

In either case, if you hear squeals or whines from under the hood, it’s usually the belt. And, because most modern cars have a timing chain, not a timing belt, the serpentine belt is the most likely cause.

If your timing belt is driving the pump, you likely want to replace that instead. However, there are multiple issues, including clogs, a bad thermostat, a bad radiator, or low coolant that could cause the same issue.

If your battery tests well (12.4 volts or higher with a multimeter) and the vehicle runs once started, but your battery keeps going dead, you might have an alternator issue.

There are plenty of things to go wrong here, so you shouldn’t stop with just the serpentine belt if you suspect there’s an issue.

How Are Serpentine Belts Replaced? (10 Steps)

If you have a few hours to spare and a good set of sockets and wrenches, you can likely replace the serpentine belt on your own.

In most cases, this is considered intermediate difficulty. You will have to pay attention to the timing and the direction of the belt.

In addition, it’s a good idea to decide if you’re going to replace the tensioner upfront or not. If so, you’ll want to have it on hand when you go to do the work.

Replacing your serpentine belt is relatively easy providing you can properly tension it. You’ll also want to pay special attention to getting the direction and the threading right.

Finally, if you are replacing the tensioners, you can simply bolt them off and put new ones back on in the same place.

It’s also extremely important that your old and new belts are exactly the same thickness and width, or they won’t properly stay in the grooves.

If you still have questions about replacing your serpentine belt, this FAQ should help.

What happens if a serpentine belt breaks while driving?

Your engine will likely overheat. In addition, if your serpentine belt powers the power steering pump, you might lose control of steering.

You will certainly be stranded until your vehicle is towed and you can replace or have the belt replaced.

This can be extremely audible while driving. However, it might not make any sound at all.

How long can I drive with a bad serpentine belt?

In most cases, driving with a bad serpentine belt is a bad idea. If it’s going bad, it’s reducing the reliability of your cooling and your power steering.

In addition, you might not be charging the battery. So, you could end up stranded.

How many years does a serpentine belt last?

So, you can expect your belt to last between 3 and 7 years on average.

The average serpentine belt replacement cost is between $150 and $200, including labor. Most of that cost is for labor.

If you buy an OEM replacement belt, you can usually expect to pay $50-$80. However, you can also get aftermarket belts for as little as $5, although the quality may vary.