If your crankshaft is going out, it’s one of the largest and most major repairs you can make in the vehicle.

Unfortunately, this seemingly simple engine part, which drives the transmission and the camshaft, takes considerable work and expertise to replace. 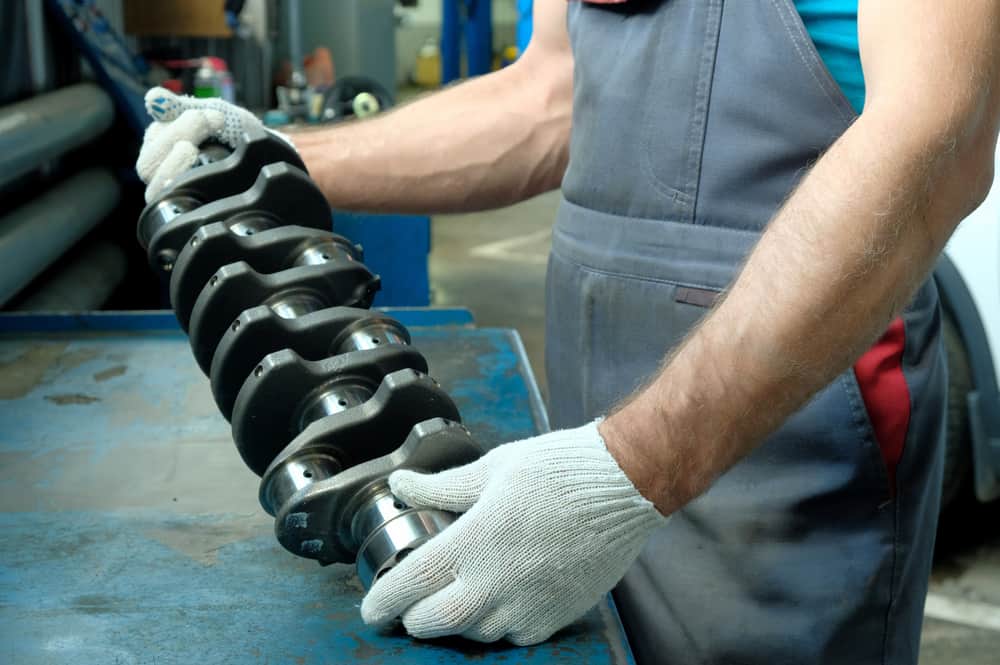 The table below shows a quick price comparison of crankshaft replacement cost estimates from reputable suppliers:

How Much Does Crankshaft Replacement Cost?*

In most cases, the largest factor in replacing the crankshaft is the cost of labor.

Therefore, the make and model of your vehicle, including factors like the room around the engine, how easy it is to pull the engine out, and the cost of the parts will all be very influential on the total cost of the replacement.

Replacing a crankshaft is a big job and one that you should expect to pay at least $2,500 for the total job, including labor.

Here, factors like the make and model of your car, the condition of the cylinders, and the cost of labor in your area will all be important.

Labor is almost always the most influential cost in replacing a crankshaft. That’s because taking the shaft out is a laborious job.

This can be a laborious process and may take several hours.

Then, everything has to be put back to the exact specifications of the engine. Bearings and rod bearings have to be reconnected and measured out perfectly.

Therefore, you can normally expect the full process of replacing a crankshaft to take 10-16+ hours.

In some cases, your mechanic may be able to do the work more quickly. In others, it might be a 3+ day job. For that reason, the cost of pulling the crankshaft out can add up quickly.

With a national average of $60 per hour, you’re looking at a bare minimum of $600, but likely much more.

Condition of the Engine

Normally, by the time you replace your crankshaft, your entire engine is having issues.

The most common reason to have to replace a crankshaft is throwing a bearing. This means you’ll have to assess whether the engine should be rebuilt as part of the replacement.

Finally, some mechanics recommend that if you de-tension the cylinders, you should replace them.

While that won’t always be necessary, it’s a good idea to check to ensure that everything is in good condition. After all, the cost of more parts is fairly small in comparison to the cost of tearing the engine down again at a later date.

Cost of the Parts

They don’t normally fail in engines. When they do, most mechanics will try to repair them. Therefore, it’s unusual to have to replace the full crankshaft. This means that you’re unlikely to find aftermarket parts for many.

On the other hand, if you have a very popular vehicle, you can likely find aftermarket parts. Here, the cost of your crankshaft can drop as low as $100.

Unfortunately, that will also heavily depend on the make and model of your vehicle, so you should check for your specific vehicle first.

Additionally, you may be able to opt for a secondhand crankshaft. Here, it’s important to inspect the part to ensure there’s no existing damage.

Alternatively, you can choose a remanufactured part, which means that a failed crankshaft has been rebuilt to meet or exceed manufacturer specifications.

3 Signs & Symptoms of a Bad Crankshaft

If your crankshaft goes out, it’s almost always because of material failure or mechanical overload. That means bearing failure, engine jamming, or faulty flywheels.

In other cases, the crankshaft might be damaged because of factory issues or mechanical damage from before the installation.

These will all result in a mechanically damaged crankshaft, which you normally spot during a physical inspection.

If your crankshaft is physically broken or stressed to the point of adding extra play into the system, it will cause knocking noises in the engine.

Often, you’ll hear these every time the engine turns over, which means you’ll hear a steady and loud knock. If you allow that to keep up, the shaft may eventually break.

In other cases, the knocking noise may not be even, but you’ll still hear it, from directly under the engine and between the front seats.

You can always inspect your crankshaft to see if it’s physically damaged.

However, you’ll normally have to remove the oil sump or oil pan to access it. This can require a significant amount of work.

Once you do, you can physically inspect the shaft for cracks, stretches, shears, stress marks, or deep grooves.

You can try cleaning the crankshaft with brake cleaner before inspection, as it can be quite dirty.

If you see metal filings or shavings, pay attention as these can be indicative of an issue as well.

It might also frequently stall. It may feel like your engine jams up. Importantly, if your vehicle is doing this, it’s a good idea to stop driving the car.

A failing crankshaft can break at any time, which means you will lose control of your vehicle. In addition, if it does seize up or break, you could cause further damage to the engine, which might mean replacing the entire engine rather than “just” the crankshaft.

How To Change a Crankshaft: 16 Step Procedure

Changing a crankshaft is a very complicated procedure. In most engines, you will have to remove the engine to do so. In some, you can access the crankshaft from the top and replace it without ripping the motor out. However, this is unlikely to be the case.

In addition, it’s important to ensure that you have the tools to get the motor back into the engine.

Removing the engine is the first part of replacing the crankshaft. Here, you may be able to get away with skipping this step. However, it’s unlikely.

To start off, follow basic safety procedures for working on your vehicle. This means parking your vehicle on a flat and level surface.

From there, you can replace your engine block and reinstall everything. Be sure to check the seals and make sure they’re installed in the right direction.

You’ll also want to double-check the flywheel and the camshaft when you reinstall.

Finally, make sure you refill the oil before you start the engine up.

If you still have questions about replacing your crankshaft, these answers should help.

Can I just replace the crankshaft?

You can but it requires significant tools and effort to do so. In most cases, you’ll need an engine hoist to do the work.

In very rare cases, you can replace the crankshaft without taking the engine out, but this is unlikely.

How long does it take to change a crankshaft?

In most cases, you should expect to spend 8-16 hours replacing the crankshaft.

Can you drive a car with a broken crankshaft?

No. The engine won’t turn over, the car won’t start, or it will be at risk of stalling and seizing up if the crankshaft breaks completely.

In addition, you could be causing more damage to the engine by driving it with a damaged crankshaft.

How long does a crankshaft last?

The crankshaft should last for the duration of the engine.

It’s extremely rare for the crankshaft to break. Therefore, most issues are usually with the sensor, the seals, or the bearings.

Replacing a crankshaft is an extremely difficult job and you need heavy-duty tooling to do the work.

However, it will save you at least $1,000 in labor, as the cost of replacing a crankshaft is more than half labor.

If you have the work done by a mechanic, you can normally expect to pay around $2,500 for the full job.