If your camshaft is going out, you’re probably having issues with engine timing, exhaust, and power.

Fixing that often means replacing one or more of the camshafts and possibly the bearings as well. Doing so can save your engine. 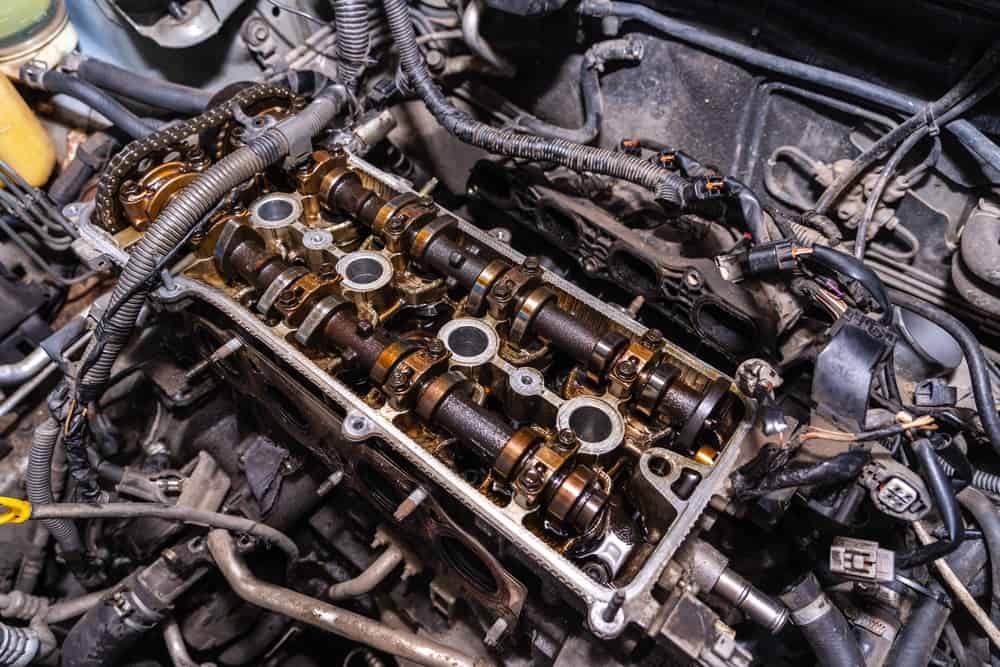 However, the average cost of replacing a camshaft is $2,000-$3,000. That includes $45-$800 in parts and the rest is labor. That’s because replacing a camshaft means tearing the engine down, installing the cam, and then resetting the timing. That will cost you 6-8 hours of your mechanic’s time.

The table below shows a quick price comparison of camshaft replacement cost estimates from reputable suppliers:

How Much Does Camshaft Replacement Cost?*

The largest cost factor in replacing a camshaft is labor. That also varies significantly by vehicle make and model.

For example, some engines have an in-block camshaft, meaning you absolutely have to pull the engine. Others have overhead camshaft configurations with multiple camshafts. These can be more complex.

However, it varies significantly per vehicle.

There are several price factors that could impact the total cost of your job. Here, the largest is labor. 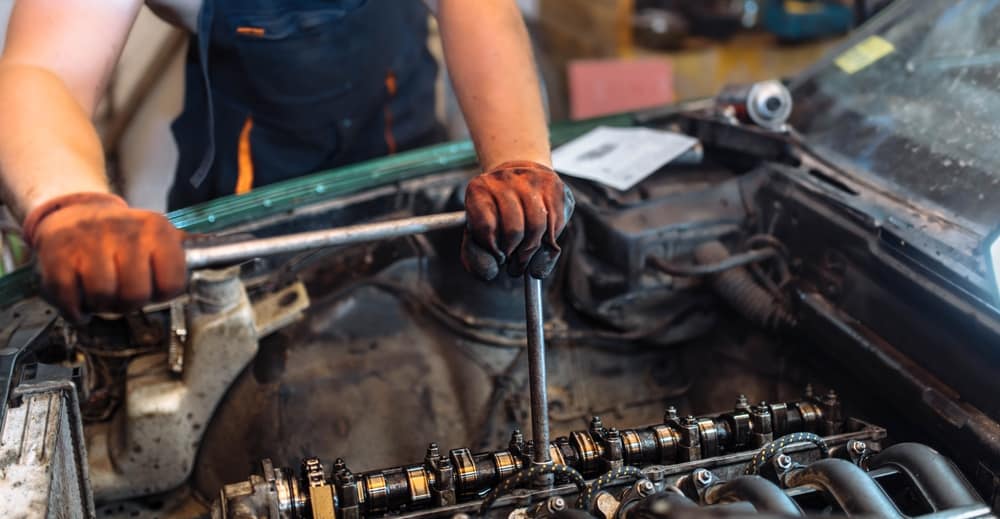 However, there are other factors as well.

Normally, camshafts fail because of issues with other parts. That might be the bearings, lubrication issues, improper torquing, etc. However, it’s almost always because something else is wrong.

Finding that issue and resolving it is important if you want to prevent the same issue from happening again.

For this reason, most mechanics will replace the bearings around the camshafts at the same time. And, if you have any other obviously damaged or worn parts, it’s a good idea to replace those too.

In others, you can do so by removing the oil pan, jacking the engine up, and replacing it from there. However, timing the engine will take a significant amount of time this way. Therefore, you should always factor in dropping the engine.

Most modern engines have 1-8 camshafts, with 2, or one intake camshaft and one exhaust camshaft, being the most common. If you own a Ford or a Dodge V8, you can even buy camshafts in sets.

However, it likely won’t be necessary to replace all of the camshafts in your engine. Instead, you should assess which are damaged and replace just those camshafts.

Of course, replacing the bearings on the other camshafts while they are out may be a good idea.

If you do have to replace all of the camshafts in the engine, it will increase the cost by the price of the camshaft plus about an hour of extra work.

So, it is a lot cheaper to replace everything at once than to come along and tear the engine out again later.

At the same time, that replacement may not be necessary.

Camshafts vary significantly in cost, with brands running from about $30 to well over $1,000. These costs depend on the brand, the manufacturer, and whether the part is a budget part or a performance once.

Here, performance parts are designed for peak engine performance. You probably don’t need them unless you have a performance car.

On the other hand, Original Equipment Manufacturer camshafts will normally cost $200-$1,000 depending on the manufacturer. However, some luxury brands will charge more.

Aftermarket parts can be significantly cheaper and are usually the way to go if you’re replacing camshafts in an older car.

However, you’ll have to discuss options with your mechanic, and you won’t be able to have aftermarket parts installed at a dealership.

4 Signs & Symptoms of a Bad Camshaft

If your camshaft goes out, your engine may refuse to respond. In addition, you might see issues with the exhaust, but you won’t likely notice that unless you have an emissions check done. 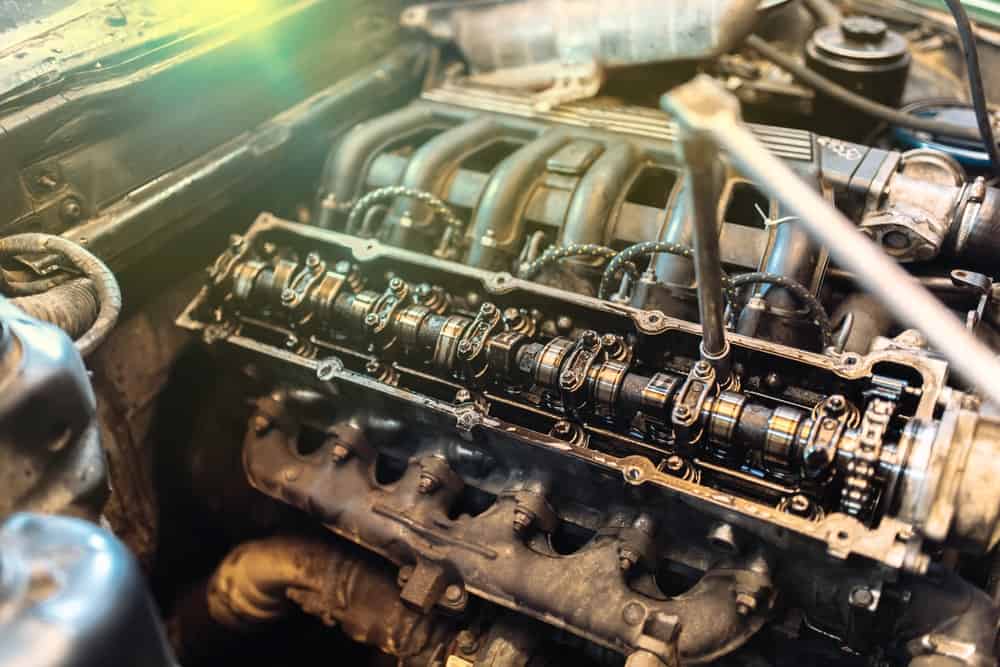 Otherwise, you can look for these four symptoms of a bad or broken camshaft.

When that timing is off, your engine starts having issues. Too much air or too much fuel results in misfiring, or stutters in your engine’s rumble.

When that happens, it almost always means there’s an issue with the fuel intake or combustion. But, that can mean the camshafts are bad.

If your camshaft bearings are worn, the camshafts are out of position, or the lubrication is gone, you’ll hear loud knocking, ticking, and tapping sounds from the engine.

These normally sound like metal on metal, or as if someone were loudly hitting a spoon on an aluminum sign.

Even if it’s not your camshaft, ticking noises from the engine are always a reason to have the full engine inspected.

If your engine oil is metallic and has a sheen to it or if you see actual metal shards in your oil, it’s a good sign the camshaft or the crankshaft is going out.

These shards normally only happen when parts inside the hydro lock start grinding up against each other – and that means something in the engine.

Normally, this means you’ll have to pull the engine or drop the oil pan to check the bearings, the shafts, etc.

If your camshaft is completely out or not aligning the intake properly, your car simply won’t start.

Similarly, it can actually stall while driving, simply because the intake isn’t timing well enough to allow fuel into the cylinders.

This means that driving with a bad camshaft can be extremely dangerous.

How To Change a Camshaft: 33-Step Procedure

If you want to change the camshaft yourself, you can do so. However, this is a big job. It will take 8+ hours.

In addition, it’s almost always necessary to pull the engine.

Finally, you have to get the timing perfect when putting the engine back in. If you don’t, it could destroy the engine the first time you go to drive it.

You’ll almost always want to pull the engine to replace the camshafts. While it isn’t necessary for every engine, it’s almost impossible to set the timing properly without doing so.

This means that taking the time to drop the engine could save you significant damage to the engine.

From here, you can test the timing by turning the engine on and letting it run. If there are no issues, you’re good. If you have to adjust the timing, you should do so now.

In addition, it’s always a good idea to run the motor for a few minutes with the radiator cap off. Press the gas pedal a few times, holding it about a quarter of the way down, and let the engine get to full temperature.

Then, turn the engine off and replace the radiator cap.

Replacing camshafts is a big job because they are normally on the bottom of the engine. Normally, they also require a significant amount of work to remove, clean, and replace. That’s especially true if you have to place and set new bearings. And, if you get the timing wrong it will destroy your motor. For that reason, it’s always better to double and triple check alignment before turning the motor on.

If you have a mechanic do the work, camshaft replacement costs are normally between $1500 and $3,000. Most of that is labor, but the job will take 8+ hours.